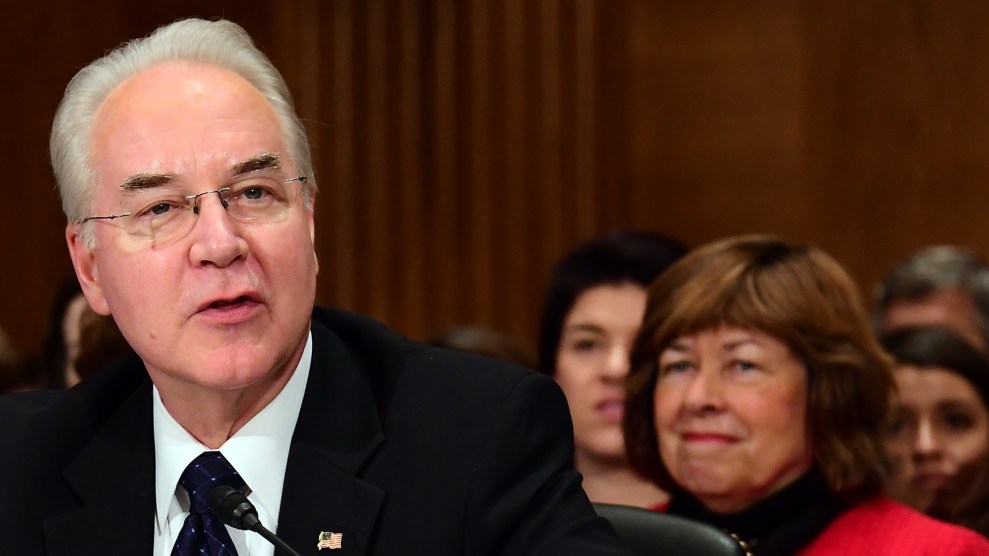 Tom Price, President Donald Trump’s pick for health secretary, has faced criticism in recent weeks that he’s too closely tied to the health industry he may soon be charged with regulating. Democrats have focused on accusations that Price personally profited by buying stock in various medical companies before writing legislation that would boost the standing of those same companies. Price has denied all wrongdoing, and promised that if confirmed, he’d sell off any financial stake in medical and pharmaceutical companies.

But the industry still has another way to funnel money in Price’s direction: by donating to his wife’s political campaigns.

Betty Price has represented the 48th district in the Georgia state House since winning a special election in July 2015. In November, she became a member of the Republican deputy whip team in the House. An anesthesiologist prior to the launch of her political career, Betty has leaned on the health industry, both in Georgia and nationally, for campaign donations. And the medical industry has maintained its financial support for her since her husband was picked by Trump—despite the fact that Betty Price won’t face reelection for another two years.

The ethics agreement Price had to file as a part of his nomination as health secretary hinted at the idea that his wife’s political position might clash with his role as head of the Department of Health and Human Services. In the agreement, Price promised to recuse himself from “any particular matter involving specific parties in which I know the state of Georgia is a party or represents a party.” That’s going to be a tricky proposition for Price to carry out at HHS: The Centers for Disease Control and Prevention are based in Atlanta and under the purview of the HHS secretary.

Price makes no mention of his wife’s political funding in the ethics agreement. Georgia is one of 28 states that allow corporations to donate funds directly to political candidates. Campaigns for the Georgia legislature can accept up to $2,500 per election cycle from a corporate entity. Betty Price ran unopposed for reelection in both the primary and general election in 2016, garnering 100 percent of the 17,886 votes in her district. She received donations from local groups like Georgia Medical PAC—to be expected given her own background in medicine and her seat on the state House’s health and human services committee.

The donations have not slowed since she won reelection in November. In the month after Trump announced Tom Price as his HHS pick, Betty Price’s campaign fund reported receiving at least $2,250 in donations from national and state medical groups. On her end-of-the-year campaign finance report, she reported having received $500 from drug-manufacturing giant Pfizer (headquartered in New York) the day after Tom Price’s nomination was announced. (A Pfizer spokeswoman says that the donation was actually made last August, and the company reported it on its own campaign contribution disclosure as having been made in August.)* San Francisco biotechnology company Genentech contributed $500 later in December.

These donations are not unique to Betty Price. Pfizer also donated to 22 other Georgia state legislators after the November election, and Genentech donated to five others. But these companies cannot donate directly to Price’s congressional efforts, nor will they be able to donate to him as HHS secretary, so his wife’s campaign could give them a path to curry favor with the man who will oversee their industry.

Betty and Tom Price’s offices did not respond to requests for comment on whether her campaign would rethink corporate donations from the medical industry if Price is confirmed to lead HHS.

As a congressman from Georgia, Tom Price has been a favorite recipient of donations from medical professionals at the national level—though thanks to stricter federal campaign finance laws, Price couldn’t collect direct corporate donations. According to OpenSecrets, over the course of Price’s career in Congress since 2006, health professionals have been by far his largest financial benefactor, donating more than $3.5 million. The second-largest group is insurance industry employees, with more than $800,000; in fourth place are people working in pharmaceuticals/health products, who have given more than $570,000.

As health secretary, Price would oversee Food and Drug Administration approval of new drugs and decide which treatments insurers are required to cover. The companies that donate to Betty Price will have a direct stake in these decisions. And with Betty Price still able to collect campaign contributions, they also have a way to try to influence them.

This story has been updated to include Pfizer’s information on the timing of its donation to Betty Price.