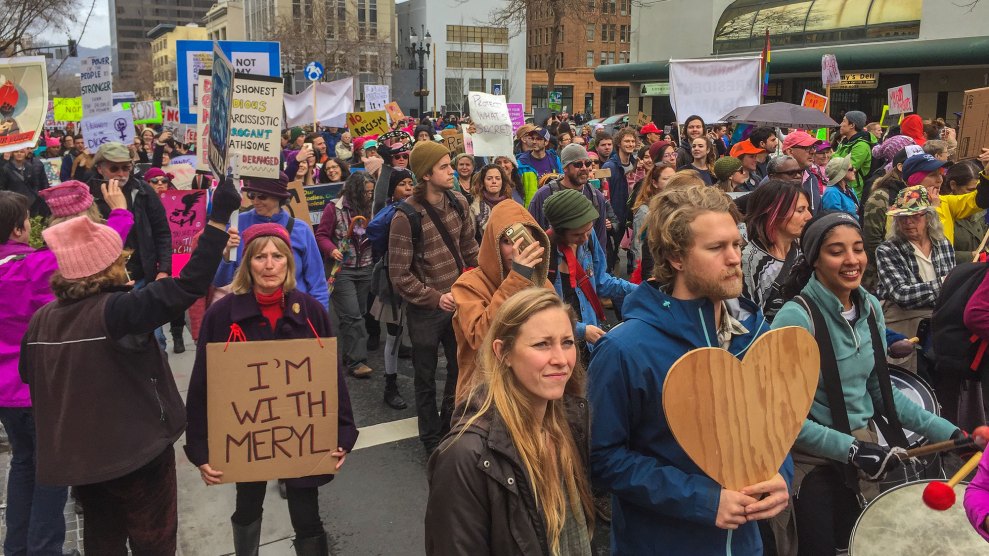 Kara Lynum was meeting with a client Monday morning when she decided to run for office. The client was an undocumented man from Mexico, and Lynum, who is an immigration lawyer in St. Paul, Minnesota, brought up current events. “I said to him, ‘I’m really sad about Trump,’ and he said, ‘Yeah, you’re sad, but I’m really worried about my family,'” she says. Lynum, 35, had joined thousands of protesters at a march through the Twin Cities on Saturday and had spent weeks thinking about what the Trump administration’s immigration policies would mean for her clients.

In Virginia, a blue state in the last three presidential elections, Democrats have failed even to show up in some races: 44 of the state’s 67 Republican delegates ran unopposed in 2015, including three Republicans in districts carried by Hillary Clinton.

So that afternoon, Lynum filled out an online form created by Run for Something, a new political nonprofit founded by two veteran Democratic digital organizers to recruit progressive millennials to run for office. Like many of the people contacting Run for Something, Lynum hasn’t thought much about what position she’ll end up running for. But she’s in good company; according to the group’s co-founder, Amanda Litman, more than 650 people contacted it about running in the six days since it launched on Friday. As Democrats wrestle with how to turn mass demonstrations against the new administration into political gains, Run for Something is one of a number of liberal organizations hoping the Trump era ushers in a new wave of first-time office-seekers.

Run for Something’s mission is not to stop Trump in 2020, at least not directly. Its focus is on local races, where Democrats have been creamed over the last eight years, losing some 935 state legislative seats during the Obama era. In 2017, it is focusing its efforts on Virginia and North Carolina, two places where Democratic gains at the state level (the party controls the governor’s mansion in both states) are undercut by conservative legislatures. In Virginia, a blue state in the last three presidential elections, Democrats have failed even to show up in some races: 44 of the state’s 67 Republican delegates ran unopposed in 2015, including three Republicans in districts carried by Hillary Clinton. Democrats have a long way to go to recoup what they lost, but they’ve also left a lot of low-hanging fruit on the vine.

Litman, a Barack Obama campaign veteran who was email director for Clinton’s 2016 effort, believes that replenishing the candidate pool has taken a back seat to other party staples, like building a get-out-the-vote program. “Candidate recruitment isn’t sexy, it takes a lot of manpower, it takes a lot time, and it needs more concerted effort,” she says, “which is why we are stepping up here.”

The idea isn’t just to supply candidates where none are currently running; the group believes the bench is too thin everywhere because Democrats are too exclusive in how they pick out candidates. “Parties are usually focused on asking their electeds, their staff, their networks, who they think should run,” Litman says. That helps build a pipeline, but it’s also an echo chamber that makes it difficult for new faces and voices to penetrate. It can be intimidating, she argues, for a prospective candidate to figure out how to run, without an organization to walk him or her through it. “So we’re trying to reach people who, one, might not ever be approached by a party or by a recruitment network, or two, might not be comfortable raising their hand if the party asks, ‘Who wants to run?'” In other words, women, people of color, and members the LGBT community—all under the age of 35.

While Run for Something’s founders stress that their efforts are focused on the state level, they view their program (and others like it) as an integral part of a larger rebuilding. As Litman’s co-founder, Ross Morales Rocketto, puts it, “When President Obama ran for office originally, he was in his early to mid-30s running for state Senate in Illinois.”

Run for Something is starting off small. Its goal is to place five good candidates in state or local races in 2017. But it isn’t the only outfit trying to turn Saturday’s worldwide women’s marches into an electoral movement. On Sunday, 500 women attended a candidate training camp in Washington, DC, hosted by Emily’s List, which funds and trains pro-choice women candidates. That session was a joint project with other progressive organizations, including the Latino Victory Fund and the Gay & Lesbian Victory Institute. Another project, Brand New Congress, was launched before the election by a group of Bernie Sanders alumni with the aim of recruiting 400 first-time candidates to run for House seats in 2018.

The quest to rebuild the Democratic bench is a long-term fight with one ominous deadline in sight. The next round of redistricting is coming up in 2020, and Democrats are still paying the price for their catastrophic losses ahead of the last redistricting. If they can’t get a foothold in state legislatures before then—they currently control both houses of the legislature and the governor’s mansion in just six states—things stand to get even worse.

The dearth of Democratic candidates has not gone unnoticed by the top candidates to lead the Democratic National Committee. At a debate at George Washington University last week, two days before Trump took office, almost every candidate for chairman, including Rep. Keith Ellison of Minnesota and former Labor Decretary Tom Perez, expressed nostalgia for the “50 State Strategy” pioneered by former DNC Chairman Howard Dean. (Dean was in attendance.) “We need a 3,007-county strategy, we need a town strategy, we need a precinct strategy,” Ellison said in December.

Democrats won’t have long to find out whether their newfound enthusiasm translates into candidates. The filing deadline for Virginia Democrats is two months away.