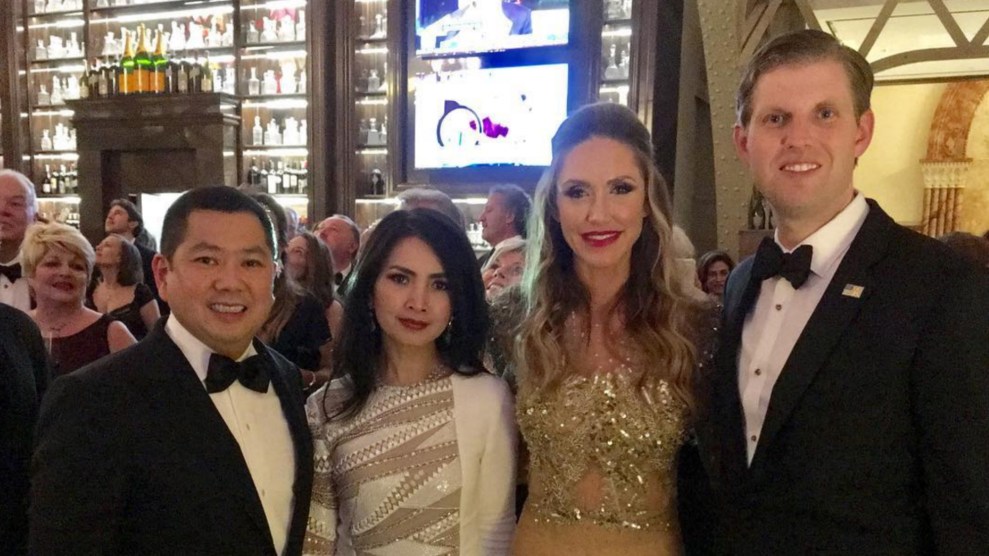 Hary and Liliana Tanoesoedibjo pictured at the Trump Hotel with Eric and Lara Trump.Instagram/@hary.tanoesoedibjo

Donald Trump vowed to wall himself off from his business interests when he became president—but at least two of his wealthy foreign business partners attended his inauguration as VIPs, where they watched the swearing-in from prime seats, partied with Trump insiders, and posed for pictures with Trump’s children and grandchildren. Here’s just one example of their incredible access during the inaugural festivities: The wife of one of Trump’s partners, Indonesian billionaire Hary Tanoesoedibjo, posted a video from inside a vehicle driving the locked-down parade route after the ceremony, as police officers stood at attention and spectators waited behind barricades for a glimpse of the new first family.

A video posted by liliana tanoesoedibjo (@liliana_tanoesoedibjo) on Jan 20, 2017 at 2:52pm PST

Despite repeated warnings from ethics experts that he needed to take dramatic steps to separate himself from his sprawling business empire, Trump entered the Oval Office with unprecedented conflicts of interest, including lucrative partnerships with a slew of rich foreign developers around the globe. At a press conference on January 11, Trump announced he would place his assets in a trust controlled by his sons—though not a blind trust, as experts had recommended—and that his company would cease cutting new deals with foreign interests during his time in office.

But Trump made clear that existing foreign deals would remain in place. Partners in two of those projects—Tanoesoedibjo, with whom Trump is developing a pair of luxury resorts in Indonesia, and Hussain Sajwani, a Dubai-based real estate developer who has licensed Trump’s name for luxury villas and lush desert golf courses—attended the inaugural festivities.

The conflict-of-interest laws that govern all other federal employees don’t apply to the president, but Trump’s foreign entanglements take him into ethically murky terrain. Some experts, including the lawyers who advised George W. Bush and Barack Obama, believe some of his dealings with foreign partners could violate the Constitution. Days into his presidency, in fact, Trump was hit with a lawsuit spearheaded by prominent ethics lawyers alleging that he is in breach of the Constitution’s emoluments clause, which prohibits federal officials from receiving financial benefits from foreign governments. The clause typically applies to payments or gifts from foreign officials and governments, but Tanoesoedibjo offers a good example of just how convoluted Trump’s conflict issues could become. Tanoesoedibjo, who has previously run for office in Indonesia, has formed his own political party and, in the wake of Trump’s victory, is contemplating his own presidential run.

Both Tanoesoedibjo and his wife, Liliana, documented their trip to the inauguration on Instagram, starting with a pre-inauguration visit to New York, where the couple met with Donald and Eric Trump at Trump Tower and then lunched with Donald Jr.

In Washington, the couple posted photos of themselves at their room at the Trump hotel, at a reception where they mingled with a Trump resort executive, and on the steps of the US Capitol at the inaugural ceremony, where Tanoesoedibjo gave an interview to Voice of America. In the interview, Tanoesoedibjo dismissed conflict-of-interest concerns over Trump’s business dealings with foreign partners.

Trump’s inaugural committee offered major perks to donors who contributed at least $100,000 toward the event, including a complimentary shuttle service to ferry them and their guests to and from events. But as foreign nationals, the Tanoesoedibjos—and the Sajwanis—are prohibited by law from contributing to this or other political committees. Neither the White House nor the Trump Organization responded to requests for comment about the Tanoesoedibjos’ and Sajwanis’ attendance at the inauguration.

After the swearing-in ceremony, the Tanoesoedibjos posted more photos of the festivities, including some showing them posing with the families of Eric and Donald Trump Jr.

The Tanoesoedibjos’ social-media posts also show that Hussain Sajwani attended Trump’s inauguration. Sajwani is a wealthy Middle Eastern businessman, based in Dubai, where he is the chairman of DAMAC Properties, a real estate development firm that has partnered with Trump to open Trump-branded golf courses and luxury villas in Dubai. The newest course is set to open early next month. At Trump’s New Year’s Eve celebration at Mar-a-Lago, he praised Sajwani, who he said was in attendance.

At his January 11 press conference, Trump said he was so committed to eliminating possible conflicts of interest that he had recently turned down a new deal with Sajwani.

But he didn’t address his ongoing deals with Sajwani. According to Trump’s last personal financial disclosure, filed in May, the president earns between $2 million and $10 million a year from his licensing deals with DAMAC.

In an interview earlier this month, Sajwani reportedly said he thought Trump’s election would be good for his business. “Naturally, I think we will benefit from the strength of the brand going forward,” he told CNBC.

In an Instagram post just hours after the inauguration, Ali Sajwani, Hussain Sajwani’s son, was more effusive, writing that “the world is looking forward to a lucrative eight years ahead!” Ali Sajwani took down his post after this story was published. Here’s a screenshot: 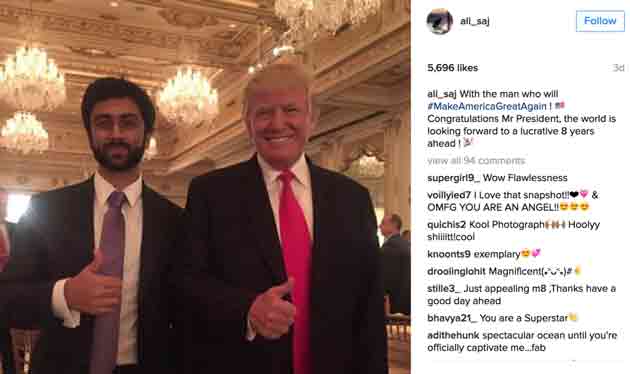 It’s not clear whether the younger Sajwani (who describes himself as an owner of DAMAC on his LinkedIn page and public bio) attended the inauguration or if the photo is from an earlier encounter. A spokesman for DAMAC did not return a request for comment.

Update: A third foreign business associate attended Trump’s inauguration and posted photographs of the festivities on Instagram. Joo Kim Tiah, the son of one of Malaysia’s wealthiest men, is Trump’s partner on his new Vancouver hotel tower, slated to open in early February.