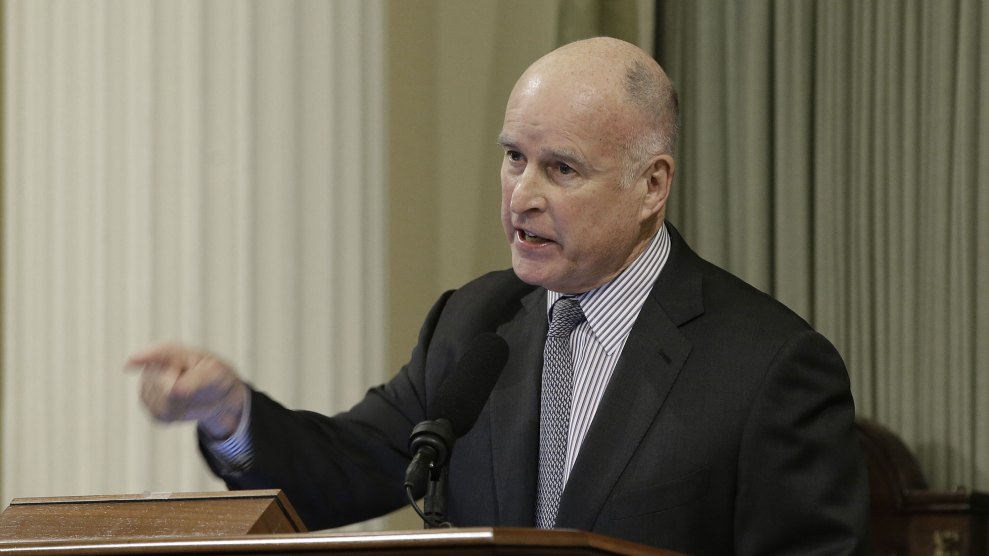 It’s almost as if the man who once ran for the White House himself were taking a stand as a kind of alternative president. In his annual State of the State address on Tuesday, California Gov. Jerry Brown reiterated a vision for the nation’s most populous state that was thoroughly at odds with the Trump administration. He pledged to continue inking California’s own climate agreements with other states and countries, to fight for the Affordable Care Act, and to “defend everybody—every man, woman, and child—who has come here for a better life and has contributed to the well-being of our state.”

Expanding upon recent vows to counter Trump’s agenda, Brown took aim at the administration’s “bald assertion of ‘alternative facts'” and “blatant attacks on science.” He lamented that the “familiar signposts of our democracy—truth, civility, working together—have been swept aside.” But he maintained that California could serve as a powerful bulwark: “We must prepare for uncertain times and reaffirm the basic principles that have made California the Great Exception that it is.”

“When we defend California,” Brown said, “we defend America.”

Here’s the full text of the speech:

Thank you. Thank you for all that energy and enthusiasm. It is just what we need for the battle ahead. So keep it up and don’t ever falter.

This is California, the sixth most powerful economy in the world. One out of every eight Americans lives right here and 27 percent – almost eleven million – were born in a foreign land.

As the English poet, John Donne, said almost 400 years ago:

“No man is an island entire of itself; every man is a piece of the continent, a part of the main…And therefore never send to know for whom the bell tolls; it tolls for thee.”

A few moments ago, I swore into office our new attorney general. Like so many others, he is the son of immigrants who saw California as a place where, through grit and determination, they could realize their dreams. And they are not alone, millions of Californians have come here from Mexico and a hundred other countries, making our state what it is today: vibrant, even turbulent, and a beacon of hope to the rest of the world.

We don’t have a Statue of Liberty with its inscription: “Give me your tired, your poor, your huddled masses yearning to breathe free…” But we do have the Golden Gate and a spirit of adventure and openness that has welcomed – since the Gold Rush of 1848 – one wave of immigration after another.

For myself, I feel privileged to stand before you as your governor, as did my father almost sixty years ago. His mother, Ida, the youngest of eight children, was born in very modest circumstances, not very far from where we are gathered today. Her father arrived in California in 1852, having left from the Port of Hamburg, aboard a ship named “Perseverance.”

It is that spirit of perseverance and courage which built our state from the beginning. And it is that spirit which will get us through the great uncertainty and the difficulties ahead.

It is customary on an occasion like this to lay out a specific agenda for the year ahead. Six times before from this rostrum, I have done that, and in some detail. And, as I reread those proposals set forth in previous State of the State speeches, I was amazed to see how much we have accomplished together.

Increased – by tens of billions – support for our public schools and universities.
Provided health insurance to over five million more Californians.
Raised the minimum wage.
Reduced prison overcrowding and reformed our system of crime and punishment.
Made California a world leader in the fight against climate change.
Passed a water bond.
Built up a rainy day fund.
And closed a huge $27 billion deficit.

And during the last seven years, California has reduced the unemployment rate from 12.1 percent to 5.2 percent and created almost 2.5 million jobs. And that’s not all.

But this morning it is hard for me to keep my thoughts just on California. The recent election and inauguration of a new President have shown deep divisions across America.

While no one knows what the new leaders will actually do, there are signs that are disturbing. We have seen the bald assertion of “alternative facts.” We have heard the blatant attacks on science. Familiar signposts of our democracy –truth, civility, working together – have been obscured or swept aside.

But on Saturday, in cities across the country, we also witnessed a vast and inspiring fervor that is stirring in the land. Democracy doesn’t come from the top; it starts and spreads in the hearts of the people. And in the hearts of Americans, our core principles are as strong as ever.

So as we reflect on the state of our state, we should do so in the broader context of our country and its challenges. We must prepare for uncertain times and reaffirm the basic principles that have made California the Great Exception that it is.

First, in California, immigrants are an integral part of who we are and what we’ve become. They have helped create the wealth and dynamism of this state from the very beginning.

I recognize that under the Constitution, federal law is supreme and that Washington determines immigration policy. But as a state we can and have had a role to play. California has enacted several protective measures for the undocumented: the Trust Act, lawful driver’s licenses, basic employment rights and non-discriminatory access to higher education.

We may be called upon to defend those laws and defend them we will. And let me be clear: we will defend everybody – every man, woman and child – who has come here for a better life and has contributed to the well-being of our state.

My second point relates to health care. More than any other state, California embraced the Affordable Care Act and over five million people now enjoy its benefits. But that coverage has come with tens of billions of federal dollars. Were any of that to be taken away, our state budget would be directly affected, possibly devastated. That is why I intend to join with other governors – and with you – to do everything we can to protect the health care of our people.

Third, our state is known the world over for the actions we have taken to encourage renewable energy and combat climate change.

Whatever they do in Washington, they can’t change the facts. And these are the facts: the climate is changing, the temperatures are rising and so are the oceans. Natural habitats everywhere are under increasing stress. The world knows this.

One hundred and ninety-four countries signed the Paris Agreement to control greenhouse gases. Our own voluntary agreement to accomplish the same goal – the “Under Two M.O.U.” – has 165 signatories, representing a billion people.

We cannot fall back and give in to the climate deniers. The science is clear. The danger is real.

We can do much on our own and we can join with others – other states and provinces and even countries, to stop the dangerous rise in climate pollution. And we will.

Fourth is infrastructure. This is a topic where the President has stated his firm intention to build and build big.

In his inaugural address, he said: “We will build new roads, and highways, and bridges, and airports, and tunnels, and railways all across our wonderful nation.”

And in this, we can all work together – here in Sacramento and in Washington as well. We have roads and tunnels and railroads and even a dam that the President could help us with. And that will create good-paying American jobs.

As we face the hard journey ahead, we will have to summon, as Abraham Lincoln said, “the better angels of our nature.” Above all else, we have to live in the truth.

We all have our opinions but for democracy to work, we have to trust each other. We have to strive to understand the facts and state them clearly as we argue our points of view. As Hugo Grotius, the famous Dutch jurist, said long ago, “even God cannot cause two times two not to make four.”

When the science is clear or when our own eyes tell us that the seats in this chamber are filled or that the sun is shining, we must say so, not construct some alternate universe of non-facts that we find more pleasing.

Along with truth, we must practice civility. Although we have disagreed – often along party lines – we have generally been civil to one another and avoided the rancor of Washington. I urge you to go even further and look for new ways to work beyond party and act as Californians first.

Democrats are in the majority, but Republicans represent real Californians too. We went beyond party when we reformed workers’ compensation, when we created a rainy day fund and when we passed the water bond.

Let’s do that again and set an example for the rest of the country. And, in the process, we will earn the trust of the people of California.

And then there is perseverance. It is not an accident that the sailing ship that brought my great-grandfather to America was named “Perseverance.” That is exactly what it took to endure the dangerous and uncertain months at sea, sailing from Germany to America.

While we now face different challenges, make no mistake: the future is uncertain and dangers abound. Whether it’s the threat to our budget, or to undocumented Californians, or to our efforts to combat climate change – or even more global threats such as a financial meltdown or a nuclear incident or terrorist attack – this is a time which calls out for courage and for perseverance. I promise you both.

But let’s remember as well that after the perilous voyage, those who made it to America found boundless opportunity. And so will we.

Let me end in the immortal words of Woody Guthrie:

“This land is your land, this land is my land
From California to the New York Island
From the Redwood Forest, to the Gulf Stream waters
This land was made for you and me…

California is not turning back. Not now, not ever.