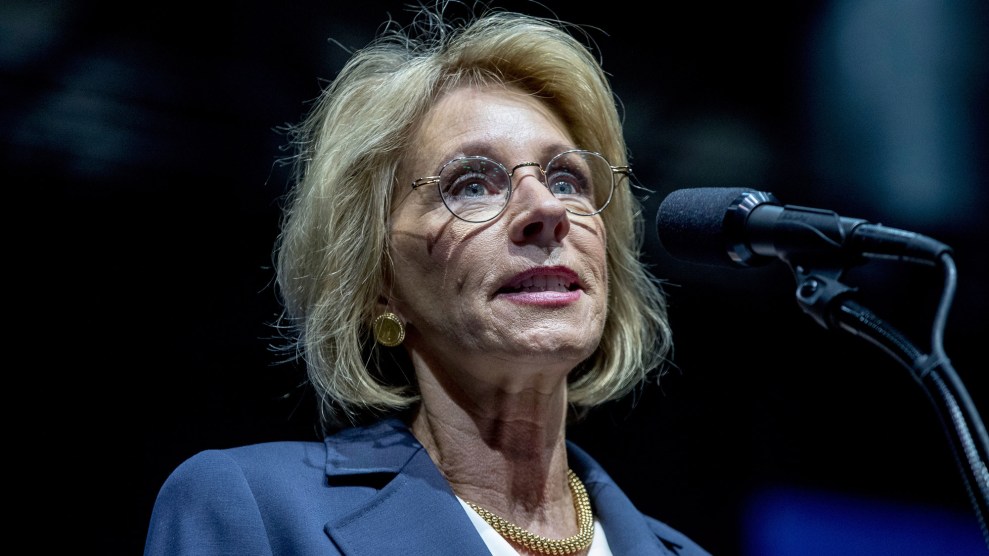 Educators have worried that DeVos, a prominent Republican fundraiser, and her support for “school choice” and the use of vouchers would endanger public education. With the billionaire’s confirmation hearing slated for Wednesday, the nation’s two biggest teachers’ unions have gone on the offensive with grassroots campaigns to challenge DeVos’ nomination.

“We did everything in our power to get Hillary Clinton elected. We didn’t have a plan B.”

Neither group anticipated Donald Trump to win the election. “We did everything in our power to get Hillary Clinton elected. We didn’t have a plan B,” Weingarten says. “We always thought Donald Trump would be as dangerous as he’s showing he is.” But both unions say they were unsurprised by Trump’s selection of DeVos, whose past work in Michigan align with the president-elect’s proposals to direct federal dollars toward private and charter schools. “We have many, many years of experience with her and her undermining of the public education system in Michigan. We have frontline stories about what her agenda and the Trump agenda has meant to communities and to students,” says Mary Kusler, senior director of the NEA Center for Advocacy. “She was not somebody who was plucked out of thin air for us.”

Education historian Diane Ravitch, who founded the advocacy group Network for Public Education in 2013, described unions as “shocked and worried” by the DeVos selection in an email to Mother Jones. “The previous Republican administrations did not threaten the very existence of public education and teachers unions,” she added. “This coming four years is an existential threat to a basic Democratic institution: public schools. Trump has picked a Secretary who is hostile to public schools. This is unprecedented.”

In the weeks following the election, the unions at the national and local levels turned their attention to trying to disqualify DeVos by emphasizing her lack of experience in public education and her work in Michigan. Last month, the AFT, which has 1.6 million members, went on an education campaign, unveiling fact sheets on DeVos and other Cabinet picks like Labor Secretary-designee and fast-food executive Andrew Puzder and Health and Human Services Secretary-designee Rep. Tom Price (R-Ga.). At these agencies, Weingarten says, are “people who have been appointed whose ideology seems antithetical to the mission of these agencies.”

On December 6, the AFT and NEA released a joint open letter condemning Trump’s pick, stating that her “sole ‘qualification’ for the job is the two decades she has spent attempting to dismantle the American public school system.” The letter has amassed more than 130,000 signatures from parents, teachers, and other supporters. Representatives from both unions say that members have been arranging meetings with senators. Meanwhile, local affiliates for both unions have encouraged members to flood senators with calls, emails, and letters in opposition.

Though activity settled down leading up to the holidays, the NEA—the nation’s largest union with 3 million members—expects to ramp up calls from members to speak on behalf of students in the next week to senators on the Senate Committee on Health, Education, Labor, and Pensions, which will oversee DeVos’ hearing. When asked if current efforts to organize around the confirmation hearing was enough to oppose DeVos, Kusler said the union’s members were doing what they could. “At the end of the day, you’ve got to remember: Our members are teaching kids during the day,” she added, likening the current grassroots efforts to that of 2015, when both unions engaged in separate campaigns during the reauthorization of the Elementary and Secondary Education Act, now known as the Every Student Succeeds Act. “We’ve never been in this situation around the confirmation for a secretary of education that has looked like this,” Kusler says. “So engaging our members using the tactics we use anyway for a legislative fight around a confirmation of a secretary is unprecedented.”

Katharine Strunk, an associate professor of education at the University of Southern California who studies teachers’ unions, noted that unions would be able to activate their base of support, but that they may have less sway in lobbying efforts, given Republicans’ firm control of the Senate. “If you don’t have the majority,” the AFT’s Weingarten says, “it’s a pretty uphill battle.” Voters who sided with Trump may have wanted to shake up the system, Weingarten adds, but she doesn’t believe that they “voted to end public education as we know it.”

“They see teachers’ unions not as partners in providing a good education for kids, but as adversaries.”

Carol Burris, executive director of Ravitch’s Network for Public Education, says she anticipates a difficult four years for teachers’ unions. The organization engaged in its own campaign, urging its supporters to send letters to senators over the holidays and to call and visit their offices. This week, the network called on members to make phone calls to senators in each state, particularly those on the committee overseeing DeVos’ hearing. “Betsy DeVos and the people who believe what she believes have no patience for unions in any form and certainly not teachers’ unions,” she says. “They see teachers’ unions not as partners in providing a good education for kids, but as adversaries.”

Future challenges from the unions will largely depend on the policies the Trump administration chooses to pursue. In a speech at the National Press Club on Monday, Weingarten warned that DeVos’ nomination threatened the bipartisan agreement around the federal government’s role in shaping education and could undermine the public education system DeVos would be charged with overseeing.

“Betsy DeVos lacks the qualifications and experience to serve as secretary of education,” Weingarten told the audience. “Her drive to privatize education is demonstrably destructive to public schools and to the educational success of all of our children.”