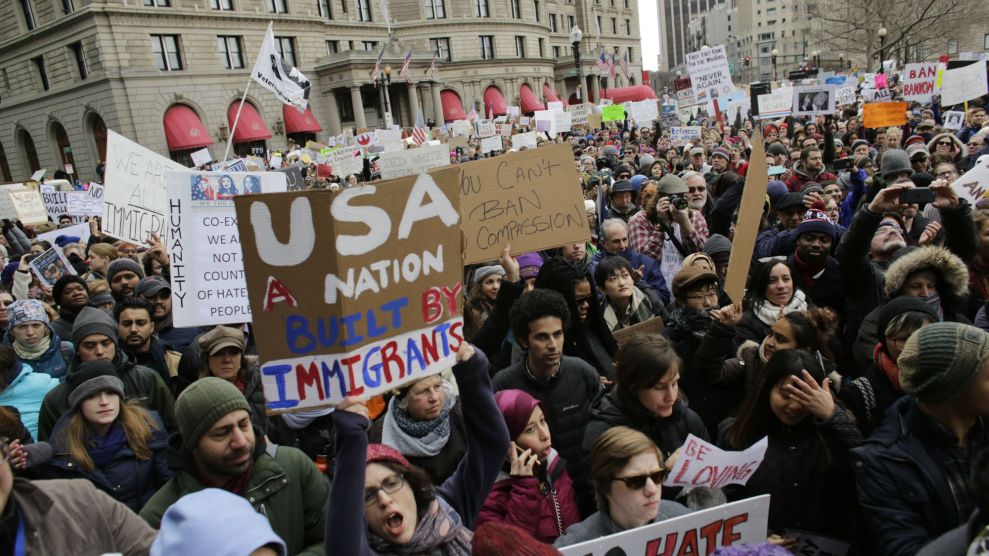 On Saturday morning, Niki Mossafer Rahmati got off her flight from Tehran in Doha, Qatar, to board a connecting flight to Boston, when she got caught up in the chaos set off by President Trump’s immigration order.

Rahmati, an MIT junior studying mechanical engineering, had been home with her family for winter break when she received word Wednesday morning of the pending executive order. She changed her flight to return to Boston right away, only to find that order had gone into effect in the middle of her connecting flight to Doha. She and some 30 other Iranians with legal visas were blocked from boarding the plane and sent back to Tehran. Among them, Rahmati says, were two women traveling to their pregnant daughters to help them through their last trimester.

“Do any of the people sound like illegal immigrants?”

“Do any of the people sound like illegal immigrants?” Rahmati asked in a public Facebook post after arriving back home in Tehran. “This will not secure the borders from terrorism and illegal immigrants. It will only increase racism in the American society. The president is trying to make Islamophobia a norm and policy by which he wants to lead the country.”

“My inbox is flooded with messages and emails of love and support,” she also wrote. “But I cannot believe all this love is coming from the same country that banned me from entering its borders just a couple of hours ago.”

Rahmati is just one among many students from Iran, Iraq, Libya, Somalia, Sudan, Syria, and Yemen who have been barred from returning to school. MIT alone has 38 students from Iran, 1 from Iraq, 5 from Syria, 2 from Sudan, and 1 from Somalia; two students, including Rahmati, were reportedly unable to board flights back to Boston. According to the New York Times, students from Stanford, Harvard, and Yale, among other universities, have also been affected.

Yesterday, after thousands of protesters stormed US airports to fight for the release of people detained upon arrival, a federal judge in New York blocked part of Trump’s order by temporarily allowing valid visa holders who had landed in the United States to stay. Federal judges in Massachusetts, Virginia, and Washington quickly followed suit, with the Massachusetts order additionally restraining enforcement of the order for visa holders traveling back to the United States in the next seven days.

In response, MIT issued a statement urging students and staff to “fly back to Boston—directly to Logan Airport—as soon as possible, and before February 4.” Whether or not the court order will be respected by Custom and Border Protection officials abroad is unknown.

Rahmati is a member of the sorority Sigma Kappa and a counselor for the MIT chapter of Camp Kesem, a national nonprofit that operates free summer camps for children whose parents have had cancer. For weeks before heading home for break, Rahmati had been fundraising for this summer’s camp. After the election, Rahmati encouraged her friends to keep an open mind to Trump supporters, according to her roommate.

As news of her situation has spread, the MIT community has sprung into action, calling elected officials and circulating a White House petition. At this writing, her ability to return to MIT to finish her undergraduate degree remains uncertain.