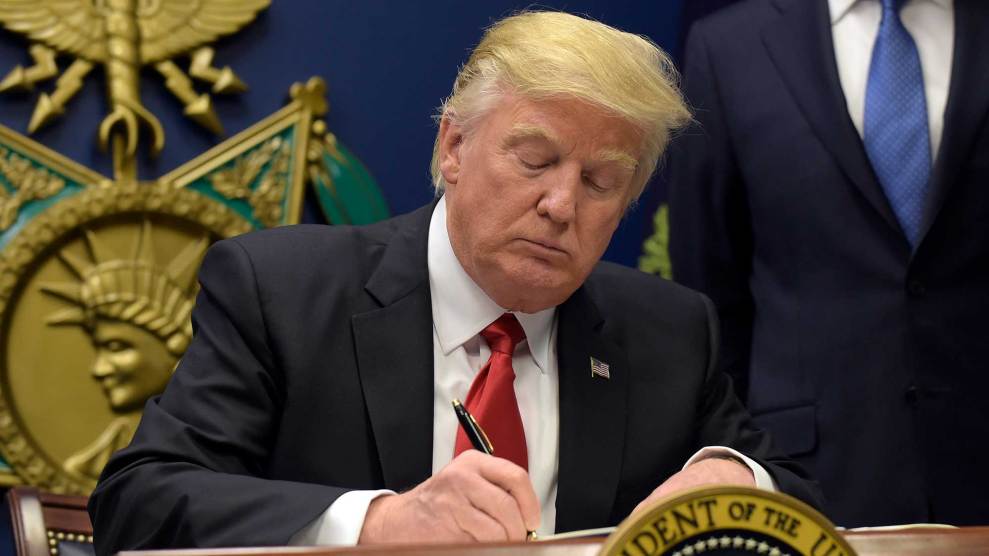 Despite a decade of working to help America in Iraq, Hameed Khalid Darweesh was welcomed to the United States with handcuffs. Darweesh had received a special immigrant visa on January 20 for his work as a contractor, engineer, and interpreter for the Army’s 101st Airborne Division in Baghdad and Mosul. But when he arrived at New York City’s John F. Kennedy International Airport on Friday night, he was among the refugees detained upon arrival in the wake of President Donald Trump’s latest executive order.

On Friday afternoon, Trump banned refugees from Syria indefinitely, suspended all refugee resettlement to the United States for 120 days, denied entry to citizens of seven predominantly Muslim nations (Iran, Iraq, Sudan, Syria, Libya, Somalia, and Yemen), and reduced the number of refugees to be resettled this year by more than half. After nearly 19 hours of detention and a lawsuit filed on his behalf, Darweesh was released on Saturday. Countless others remain stuck in limbo.

While Trump’s executive order claims to be in the interest of “protecting the nation,” experts in national security and counterterrorism who spoke with Mother Jones argue that it poses potentially disastrous immediate and long-term security threats to the nation and US personnel overseas.

“At the exact moment we need them most, we’re telling these people, ‘Get screwed.'”

“Not only is it immoral and stupid, it’s also counterproductive,” says Patrick Skinner, a former CIA counterterrorism case officer who now works at the Soufan Group, a security consulting firm. “We’ve got military, intelligence, and diplomatic personnel on the ground right now in Syria, Libya, and Iraq who are working side by side with the people, embedded in combat, and training and advising. At no time in the US’s history have we depended more on local—and I mean local—partnerships for counterterrorism. We need people in Al Bab, Syria; we depend on people in a certain part of eastern Mosul, Iraq; in Cert, Libya. At the exact moment we need them most, we’re telling these people, ‘Get screwed.'”

Kirk W. Johnson, who spent a year on the reconstruction in Fallujah in Iraq with the US Agency for International Development (USAID), echoes Skinner’s fears: “This will have immediate national security implications, in that we are not going to be able to recruit people to help us right now, and people are not going to step forward to help us in any future wars if this is our stance.”

The US-led war on ISIS is but one front in a constellation of fights against extremist groups that could be hampered by Trump’s decision. “The US is officially banning people in these countries at the same time we’re trying to build up local support to fight ISIS,” Skinner says. “It takes a long time to build trust with these people. This is like the Abu Ghraib thing. You have to start over, say, ‘Okay, starting now, trust me.’ How many times can you get away with that?” It also sends a message that groups like the so-called Islamic State can exploit. Elizabeth Goitein, the codirector of the Brennan Center’s Liberty & National Security Program, says, “The message this projects is that America sees Muslims as a threat—not specific actors who are intent on committing terrorist acts. The message that America really is at war with Islam will be ISIS’s best friend.”

BuzzFeed reporters Mike Giglio and Munzer Al-Awad spoke with five current or former ISIS fighters who cited Trump’s divisiveness as a factor that will weaken America. They added that his rhetoric against Muslims will help them reinforce their narrative that America and the West are fighting not just terrorism, but Islam itself. “Trump will shorten the time it takes for us to achieve our goals,” said one.

Meanwhile, the very allies who have operated alongside US personnel in war zones for years—contractors and translators like Darweesh—are once again being abandoned. For the past decade, Johnson has been leading an effort to resettle Iraqi allies, many of whom, he says, face torture, kidnapping, and death after collaborating with American soldiers. It all started in 2006 when he heard from an Iraqi USAID colleague who’d been identified by a militia. The militia left a severed pig’s head on his door step, along with a message saying that it would be his head next. Despite his years of helping the United States, the US government offered no help, and he had to flee the country with his wife.

Johnson discovered that there was no mechanism in place to help US allies like his colleague, and he began a personal crusade to change that. Since then, through legislation and a special immigrant visa platform, Johnson’s efforts have helped thousands reach the United States, but the process is cumbersome, long, and often too late for the people who need it most. Johnson speaks of interpreters “who were having legs shot off, cut off, their wives raped, their children abducted.” Some of his colleagues were even killed. And though Johnson has been critical of the process for years, now he’s in the “awkward position” of defending it, because it was at least better than shutting those allies out as a matter of policy.

Skinner, Johnson, and Goitein all point out that the executive order reads as if whoever wrote it had no understanding of, or done any work with, US refugee admissions programs. Indeed, a senior Department of Homeland Security official reportedly told NBC News that career State Department and DHS officials had no input in the order, saying, “Nobody has any idea what is going on.” Johnson says, “It reads as though 9/11 happened yesterday, and that 9/11 was carried out by refugees, which it wasn’t, and it creates a series of policy prescriptions to solve a problem that doesn’t exist, as if the stringent measures that have been put in place over the past 15 years to screen refugees don’t exist.”

Johnson, exasperated at the thought of US allies being turned away by the very country they spent years helping, adds, “These people who are directly and immediately impacted by this have done more to help our country than just about every breathing American has—especially the president. Shame is not a strong enough word for today. This is a disgraceful moment.”