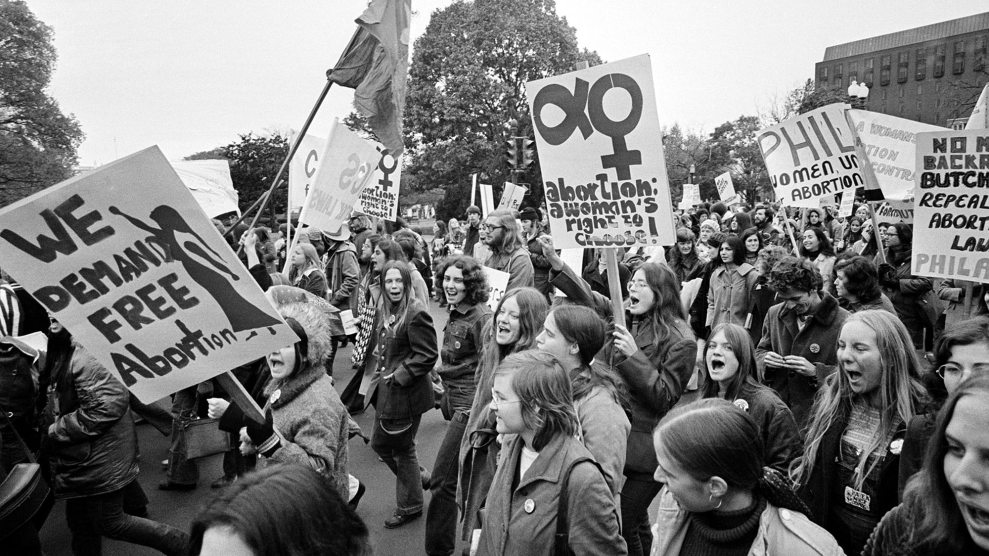 Pro-choice demonstrators march to the US Capitol in 1971.Associated Press

Like many Democrats, State Rep. Sara Feigenholtz, who is now in her 12th term representing Illinois’ 12th district, didn’t expect Donald Trump to win the presidency. But on November 9, Feigenholtz, a longtime champion of women’s health measures in the General Assembly, realized that Trump’s campaign trail talk about appointing conservative Supreme Court justices who would overturn Roe v. Wade could become a reality.

“We thought we wouldn’t have to worry about this stuff,” Feigenholtz says, “but the new administration has been a wake-up call. I had to stop and say, ‘Okay, now what? How do we protect women?'”

She was especially concerned about an obscure 40-year-old provision in Illinois’ criminal code, one of a number of measures in 10 states across the country, that anticipate a time when the Supreme Court reverses itself on abortion. They are often referred to as “trigger laws,” because even though each state’s provision works a bit differently, the measures are “triggered” by the reversal of Roe v. Wade. Should that occur, these states commit to making abortion illegal in all cases, except to protect a mother’s life, just as it was before the Supreme Court’s 1973 ruling. (In four states, the trigger law makes the switch back to illegal abortion automatic.)

Feigenholtz was familiar with Illinois’ trigger clause from her previous work on women’s health measures in the General Assembly. After the election, she contacted local pro-choice advocates, including chapters of the ACLU and Planned Parenthood, to float the idea of proposing a measure to void Illinois’ trigger law, as part of a bigger bill that seeks to expand abortion access by including abortion care in Medicaid and state employee health coverage. The bill she introduced in January, HB 40, proposes cutting Illinois’ trigger language and affirming the state’s commitment to uphold abortion rights, no matter what happens in Washington.

Many such laws, including the one in Illinois, go even further, saying that if Roe is overturned, the state intends to renew their so-called “policy” that life begins at conception. This approach could not only affect the legality of abortion but also common forms of birth control, such as Plan B or IUDs, which some anti-abortion advocates consider to be abortifacients despite medical consensus to the contrary.

“After the passage of Roe, a handful of states said, ‘If we can ever go back, we want to go back,'” says Daniela Kraiem, the associate director of the women and the law program at the Washington College of Law at American University. “The point of those laws, up until now, has been largely symbolic,” she says, a way for states to “allow women to exercise their constitutional rights, but under protest.”

With the commitment of Trump and Pence to overturning Roe, these laws may no longer be only symbolic. Feigenholtz was motivated to try to undo Illinois’ trigger law before any Supreme Court decision, but Texas state Sen. Bob Hall had the opposite idea: He introduced a new trigger law earlier this month. “I think there might be a real possibility that a Supreme Court in the near future just might overturn Roe v. Wade,” Hall told the Houston Chronicle. “If they were to do that, then this would put in place in Texas that abortions would be illegal.” (Hall’s office did not respond to requests for comment from Mother Jones.)

The process of overturning Roe and removing the constitutional guarantee of the right to an abortion is not a given and would take some time. With the need for another opening on the Supreme Court, a confirmation process for a new justice, and a strong case that would move through the lower courts, Feigenholtz acknowledges that the Illinois trigger law would likely not be activated in the immediate future. But with the Senate confirmation process for Judge Neil Gorsuch set to begin sometime in March—Trump’s first step toward building a conservative majority on the high court—she is concerned about a return to “frightening times.”

“There will be an immediate harm to women.”

“I just turned 60. I remember a lot. I remember pooling money for friends and putting them on buses and sending them to New York. Women were having abortions unsafely and dying in sepsis units in hospitals,” she says. “If it’s in the statute, women are at risk.”

If the Supreme Court did overturn Roe, the enforceability of these trigger clauses is complicated and difficult to predict, Kraiem explains. For instance, six states—Arkansas, Illinois, Kansas, Kentucky, Missouri, and Ohio—enshrine only their intention to revert back to pre-Roe policies, without requiring an automatic switch. Since a number of those legislatures tend to skew conservative, that intention could very quickly become law.

“If you look at this list of states, there are a bunch where it would be easy to pass an abortion ban very, very quickly,” says Elizabeth Nash of the Guttmacher Institute, a nonprofit that tracks abortion legislation.

All this legal uncertainty virtually guarantees that, in practice, the effect of trigger laws would be “immediate” Kraiem says. “When all of a sudden, it may be illegal, there are going to be very few doctors willing to perform the procedure at that point,” she says. “It creates a chilling effect.” Litigation would likely attempt to resolve what exactly each trigger law does and doesn’t require, Kraiem says. But women who need to terminate pregnancies will not have the luxury of waiting for legal resolution. “There will be an immediate harm to women,” she says.

Feigenholtz’ proposed bill to protect abortion access in Illinois in the event of Roe‘s demise also has implications for women across the Midwest. In recent years, women from neighboring states have increasingly sought abortion care in Illinois, because their home states have enacted some of the country’s toughest restrictions on abortion. Missouri, for instance, has only one remaining abortion clinic, while Ohio and Wisconsin both have mandatory pre-abortion waiting periods and ultrasound requirements, prohibitions on public funding for most abortions, 20-week abortion bans, and more. In 2016, Planned Parenthood of Illinois saw a spike in visits from residents of neighboring states, especially from Indiana, where as governor, Vice President Pence enacted a slew of abortion restrictions, including a prohibition on women choosing abortion because of fetal disability and a requirement that aborted fetuses be buried or cremated. More than half of all Illinois Planned Parenthood visits from Pence’s home state in 2016 were for abortions.

Personal PAC, which works to advance reproductive rights in Illinois, helped gather more than 8,000 statements in support of Feigenholtz’s bill, which passed out of committee last week and will now go to the Illinois House for a vote. Personal PAC’s president and CEO, Terry Cosgrove, says that in the event that Roe is overturned, he believes the courts would ultimately find trigger clauses enforceable. “In the age of Donald Trump,” he says, “I don’t think we can count on the judiciary.”