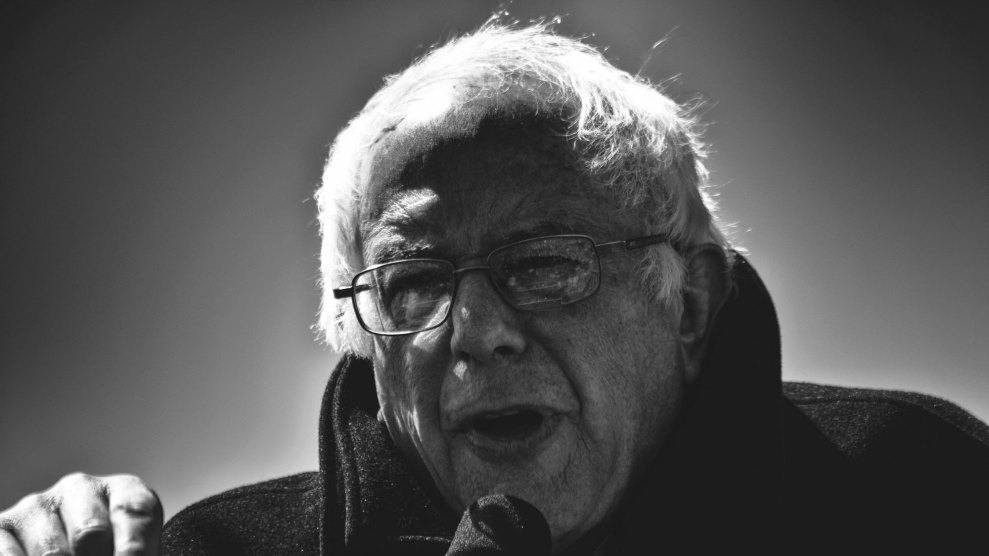 As the Democratic Party struggles to regain its footing following its disastrous November election, one vestige of the 2016 campaign has taken on much importance: Vermont Sen. Bernie Sanders’ email list. Sanders, who raised $218 million online from a record 2.8 million donors, rewrote the rules of email fundraising during his campaign by relentlessly courting small-dollar contributors. For many of those donors, Sanders was the first Democratic presidential candidate they had supported—or the first politician they had ever helped.

In an interview with the Huffington Post in December, former Labor Secretary Tom Perez, a front-runner in the election for Democratic National Committee chair, said he wants “to learn from Senator Sanders about how he did it.” At a DNC chair debate in January, another candidate, Rep. Keith Ellison (D-Minn.), whom Sanders has endorsed for the DNC job and who is widely seen as someone who can heal the party’s Sanders-Clinton divisions, pledged to try to obtain the email list for the party if he wins. “We’re gonna call on everybody to give all the resources they have,” Ellison said. “We’re in an emergency situation.”

Democrats have made no secret they covet Sanders’ list, which Sanders controls through his Senate campaign and the political nonprofit he founded, Our Revolution. The decision on what to do with it rests with Sanders. “Our Revolution won’t be giving over the list,” says the group’s president, Jeff Weaver, who was Sanders’ presidential campaign manager. Sanders, for his part, has mostly stayed quiet about the future of the list, which one Democratic consultant referred to as his “precious.” He told the Washington Post in January that he would “cross that bridge” when he comes to it. “There has been no discussion with the DNC about use of the list,” says Sanders spokesman Michael Briggs.

Campaigns and political action committees regularly purchase supporter lists from other organizations, as a shortcut to raise money and recruit volunteers. Large, lucrative lists can become valuable commodities in the campaign marketplace. (President Barack Obama’s presidential campaign rented his list to Organizing for Action for $1.2 million in 2015.) But former Sanders staffers and consultants scoff at the demand for the list. The way they see it, clamoring for access misses the point. The list wasn’t the campaign’s secret weapon; Sanders was.

“They keep thinking it’s the list,” says Becky Bond, who as a senior adviser to Sanders helped build the candidate’s national organizing operation. “It’s so crazy. It’s like someone who buys a $12,000 bicycle and thinks they can win the Tour de France.”

“At the end of the day, it’s not like there’s something magical about Bernie’s email list—anyone can build an email list with the right investments, and you can also get millions of people on an email list,” says Michael Whitney, who was an architect of Sanders’ digital fundraising operation while working for the progressive consulting firm Revolution Messaging. “The thing that differentiates Bernie’s from any other email list has been that there is a message of people being in this together, and there was a message of empowerment.”

“They keep thinking it’s the list. It’s so crazy. It’s like someone who buys a $12,000 bicycle and thinks they can win the Tour de France.”

That may sound like campaign-strategist bluster, but in Sanders’ case there’s some truth to it. Sanders needed small-dollar donors because he was campaigning against the politics of big money, and supporters opened up their wallets in response to his assault on the well-heeled corporate and political establishment. His fundraising pitch and policy platform were in sync in a way that most campaigns can’t match.

The Democratic National Committee, which can accept up to $33,400 in donations from individuals annually—roughly 12 times the limit for a specific presidential or congressional campaign—doesn’t work like that. It has traditionally banked its funds via the high-dollar fundraisers Sanders so despised. (Sanders supporters also came to loathe the DNC itself, which they accused of tipping the scales in favor of Hillary Clinton during the primary.) Detaching Sanders’ list from his message, Sanders backers argue, would diminish what made it so valuable. “Bernie Sanders’ list isn’t an ATM machine and just handing it over to the DNC might raise a little bit of money, but it won’t produce a fraction of what it’s capable of,” says Tim Tagaris, who was Sanders’ digital fundraising director for the campaign. “They still need to figure out the PIN.”

The fear among Sanders alums isn’t just that the DNC can’t recreate the magic. It’s that the party will sap his supporters’ energy with the kinds of gimmicky pitches the Sanders campaign swore off. Democrats often “treat their email lists as Chicken Little, ‘sky is falling,’ trying to con money out of people, whereas Bernie took steps to actually bring people together and have messaging that they were a part of it and treat people with respect,” Whitney says. As an example of what he and other Sanders supporters are afraid of, he points to the Democratic Congressional Campaign Committee, which peppers its email list at the end of each month with passive-aggressive “final notice” emails, warning them that their “membership” in the party will expire if they don’t donate immediately.

“They’re straight up lying to people to get money,” says Melissa Byrne, the digital director for Sanders’ New Hampshire primary campaign, who is now running for vice chair of the DNC. She opposes renting the Sanders list to the party because she fears doing so will deepen the cynicism with which many Sanders supporters view the party establishment. The list is “not something you just say, ‘hey, hit export,’ and then upload. People would feel like they were being disrespected. They would feel like they weren’t being valued.”

Still, these Sanders staffers don’t think the DNC is a lost cause. They just think the solution is for the party to build its own Bernie list. It would require whoever takes over the DNC to be transparent with supporters about where the party was getting its money and what its goals were. And it would require some concrete structural changes within the organization—for instance, by prohibiting donations from lobbyists, as Ellison has proposed. But if it plays its cards right, the cracks just might open. The recent fundraising success of the ACLU, which raised more than $25 million over three days after President Donald Trump announced his travel ban, speaks to the success an established organization can have in the Trump era.

So far, the leading candidates for DNC chair have both hinted at a more Sanderseque approach to fundraising. Ellison’s platform promises to set a goal “that low-dollar contributions from everyday Americans account for 33% of revenue.” (That’s about half as much as Sanders’ campaign.) Perez promises to “encourage and prioritize small-dollar fundraising,” but he has not set a target percentage.

Or maybe there’s a compromise waiting to be struck. As one former Sanders digital staffer joked in an email, noting that Sanders, via email appeals, had raised more money directly for Democratic candidates than any other politician in 2016, “Maybe the DNC should turn their list over to Bernie?”