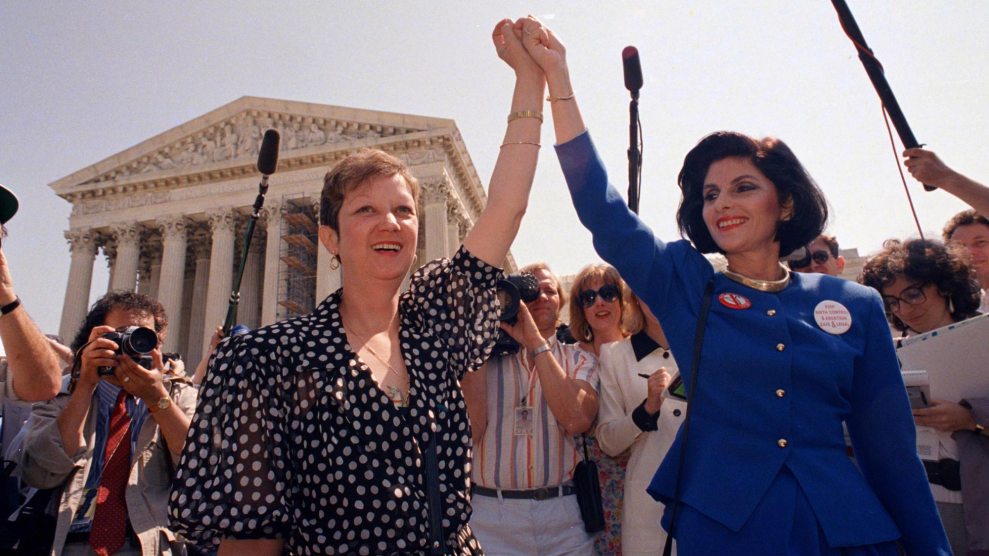 Norma McCorvey (left) with attorney Gloria Allred in 1989 on the steps of the Supreme Court following oral arguments in Webster v. Reproductive Health Services, a case about a Missouri abortion law.J. Scott Applewhite/AP

Norma McCorvey, the “Jane Roe” plaintiff in the Roe v. Wade Supreme Court case that legalized abortion in the United States, died Saturday at at an assisted-living facility in Katy, Texas. She was 69.

McCorvey was a complicated symbol for the political fight over abortion rights. Following the high court’s 1973 decision, she became the face of the pro-choice movement. At the time, she represented the struggles faced by ordinary women confronted with unwanted pregnancies. Abortion was illegal in Texas in almost all cases when she learned she was pregnant in 1969. Poor and with a ninth grade education, she didn’t have the means to seek abortion across state lines. The legal battle dragged on for three years; by the time she won, she had long since carried the pregnancy to term. She gave the baby up for adoption.

After years as the face of the pro-choice movement, McCorvey reversed her views and became a spokeswoman for the anti-abortion cause.

But in 1995, McCorvey reversed her stance on abortion after discussing the Bible with Pastor Flip Benham, the director of Operation Rescue, an aggressive pro-life group that had moved in next door to the women’s health clinic where McCorvey worked. She soon quit her job at the clinic and was baptized by Benham. She became a spokeswoman for the anti-abortion movement, penning a book about her ideological transformation and traveling the country giving speeches to religious groups.

Like McCorvey’s own views on abortion, popular opinion about a woman’s right to choose has been the subject of much conflict and debate since the landmark 1973 case. And while a strong majority of Americans still agrees with the Roe decision, dismantling the right to an abortion is now an explicit objective for both the new administration and the Republican-led congress.

In the month since President Donald Trump’s inauguration, GOP lawmakers have put forward measures aimed at pulling federal family planning funds from Planned Parenthood and repealing the Affordable Care Act, including its requirement that insurance plans cover contraceptives. They have also introduced bills that would make abortion illegal after 20 weeks of pregnancy and would ban the standard abortion method used by doctors in the second trimester.

A Supreme Court majority that would be open to overturning Roe is becoming increasingly likely, as well. This is something Trump promised repeatedly during the campaign as part of his largely successful effort to win over skeptical evangelical voters. As a candidate, he made four promises to the anti-abortion community: He pledged to nominate anti-abortion justices; defund Planned Parenthood; sign the 20-week abortion ban; and permanently enshrine into law the Hyde Amendment—a 40-year old budget rider that Congress has repeatedly used to bar federal tax dollars from funding most abortions. Assuming that Judge Neil Gorsuch is confirmed this spring, it may only take the departure of one pro-abortion-rights justice to tip the balance on the court against Roe.

During the campaign, the formerly pro-choice Trump brought on Mike Pence to shore up his anti-abortion bonafides. As governor of Indiana, Pence signed some of the country’s strictest abortion restrictions into law, including a measure requiring burial or cremation of aborted fetus remains and a ban on abortions due to fetal anomaly. In a September 2016 speech, Pence told an evangelical conference in Washington, DC, “I want to live to see the day that we put the sanctity of life back at the center of American law, and we send Roe v. Wade to the ash heap of history, where it belongs.”

Last month, Pence became the highest-ranking government official to ever address the annual March for Life in person. “Life is winning again in America,” Pence said at the anti-abortion gathering, pointing to the “historic election of a president who stands for a stronger America, a more prosperous America, and a president who, I proudly say, stands for the right to life.”

Roe has been seen by many as an imperfect decision. Justice Ruth Bader Ginsburg, one of the foremost legal warriors for gender equality, has criticized the decision for changing too much, too quickly. After founding the ACLU’s women’s rights project in the 1970s, Ginsburg focused on fighting sex discrimination with an incremental strategy. She brought several cases to the Supreme Court, building up a body of court victories that together established a sweeping legal and moral understanding of sex discrimination as something that is both illegal and wrong. Roe, she said at a conference in 2014, “established a target” for abortion opponents because it ditched this incremental approach, instead imposing a drastic change on states across the country. She suggested that if the high court had moved a little more slowly, today the idea of reproductive choice wouldn’t be so controversial. “A movement against access to abortion for women grew up, flourished, around a single target,” Ginsburg said.

After her victory as Roe’s main plaintiff, McCorvey joined the movement that sprung up to oppose Roe. Her death comes at a time when that movement, with help from the Trump White House, could achieve many of its long-held goals.