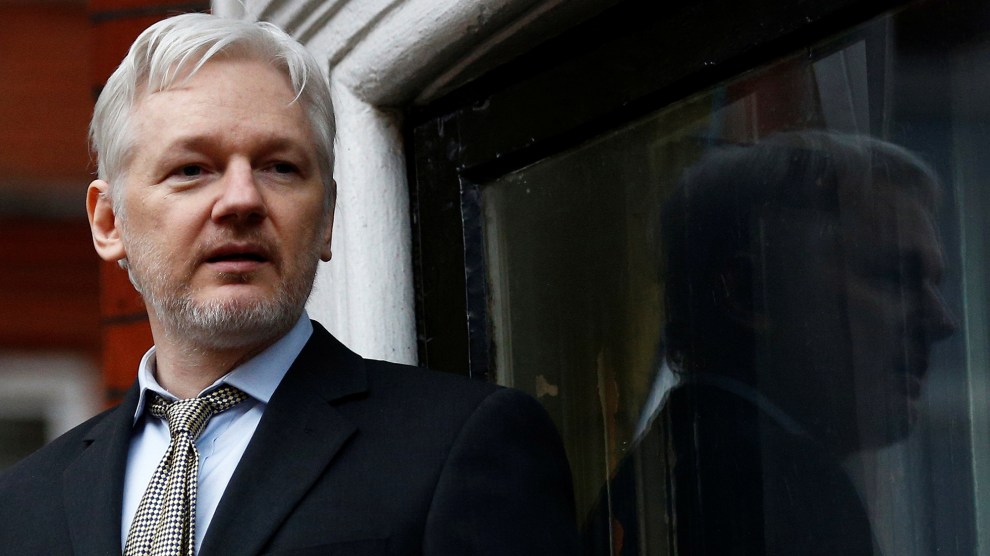 On January 12, WikiLeaks tweeted that founder Julian Assange, holed up in the Ecuadorian embassy in London, would “agree to US extradition” if President Barack Obama granted clemency to convicted Army leaker Chelsea Manning. Five days later, Obama commuted Manning’s sentence, and the spotlight turned to Assange. The embattled Australian said that although he’d hoped for a full pardon for Manning, he would stand by his pledge and discuss a return to the United States with the Department of Justice.

But the situation isn’t that simple, says Barry Pollack, Assange’s Washington, DC-based lawyer. Assange, Pollack says, is stuck in limbo because the Justice Department won’t make clear what it’s intentions are—whether it will charge him, whether he’s already been indicted, or whether there’s room to talk about a resolution.

“I have, for quite some period of time, been trying to get the Department of Justice to engage in some sort of a dialogue about what it is they are looking for,” Pollack tells Mother Jones. “Where does Julian fit into whatever investigation they’re doing? Have they charged him? Will they charge him? Are they seeking to extradite him? And the Department of Justice has just repeatedly refused to engage or provide any information whatsoever.”

Assange has been a thorn in the side of the US government for years, but his decision last year to publish tens of thousands of hacked Democratic Party emails and documents, allegedly stolen at the behest of the Russian government and passed to WikiLeaks, further inflamed tensions. On January 6, intelligence officials released an assessment accusing Russian intelligence of directing the hacks in order to hinder Hillary Clinton’s chances of becoming president and boost those of Donald Trump.

Assange has denied that the Russian government was his source and said the January 6 report was “embarrassing” to the agencies that gathered the intelligence and a “political attack cannon against Donald Trump.” Assange denies that he supports Trump: Last July, he likened the choice between Clinton and Trump to one between “cholera or gonorrhea.” But he has drawn praise from Trump and conservatives, with some arguing that Trump should pardon Assange on any potential charges.

So when Assange offered to give himself up to US authorities in exchange for Manning’s release and Obama commuted Manning’s sentence, eyes turned to Assange to see what he’d do next. Two weeks later, that hasn’t become any clearer.

“We look forward to having a conversation with the DOJ about what the correct way forward is,” Assange said during a January 19 press conference. “We say, of course, that they should immediately drop their case, or they should unseal their extradition request if they have one, unseal their charges…But what is occurring in the United States is an attempt to prevent us and our lawyers getting our teeth stuck in to this case and getting standing by keeping it secret.”

Pollack, who represents Assange in his US legal matters and has nothing to do with WikiLeaks, says there is no basis for anyone to make predictions about how Trump might handle the Assange and WikiLeaks investigation. But he points to Obama’s commutation of Manning’s sentence and his pardon of General James Cartwright, who pleaded guilty to lying to FBI investigators in 2016 about providing information about the Stuxnet computer virus to reporters, as evidence that the crackdown on whistleblowers might be ebbing.

“My hope,” he says, “would have been and is that the commutation of Manning’s sentence—and, for that matter, the pardon of Cartwright—signals that we’re moving into a new phase…that maybe there’s some thought somewhere in the US government that our war on whistleblowers has gone a little bit too far.”

The Justice Department has been investigating potential crimes committed by WikiLeaks and Assange since 2010, after the site that year published a video shot in 2007 from a US military helicopter as it gunned down a dozen people in a Baghdad neighborhood. (A Justice Department spokesman declined to comment on the department’s investigation, and the White House didn’t respond to several requests for comment.) A month later, Manning, then an Army information analyst stationed in Baghdad, was detained by the military after being turned in by a former hacker she’d confided in about stealing the material published by WikiLeaks.

In November 2010, the website began publishing information from more than 250,000 US diplomatic cables in conjunction with several major newspapers. In September 2011, the site released the full unredacted batch of State Department cables after the material became available online through other means. Manning was formally charged with crimes related to stealing the documents in February 2012, convicted in July 2013, and sentenced to 35 years in prison in August 2013.

After the commutation was announced, Obama said that justice had been served. “First of all, let’s be clear,” Obama said at his last press conference as president. “Chelsea Manning has served a tough prison sentence.” He noted that Manning’s sentence was “very disproportionate relative to what other leakers had received” and that “it made some sense to commute a part of her sentence.”

Assange was accused of rape in Sweden in August 2010, a charge he denies. At the time, he implied that the accusations were “dirty tricks” by US intelligence to discredit WikiLeaks. “Reminder: US intelligence planned to destroy WikiLeaks as far back as 2008,” Assange tweeted after the accusations became public. Fearing that the Swedish government would send him to the United States, Assange sought asylum in Ecuador. The country granted it in August 2012, citing the possibility that he could be the victim of “cruel and degrading” treatment in the United States.

Assange has been in the Ecuadorian embassy in London ever since, and the British government says it will not allow him to leave the embassy and plans to hand him over to Sweden as part of its obligation to respect a European arrest warrant. The United Nations Human Rights Council Working Group on Arbitrary Detention has called the situation “a state of arbitrary deprivation of liberty” and noted that under current British law—which was changed to raise the bar for extraditions after Sweden issued its warrant—Assange’s extradition to Sweden would not be approved by the British government.

Assange asserts that WikiLeaks is merely publishing information it obtains, much as news organizations do every day. But the government might make the case that Assange went beyond merely accepting material from Manning, perhaps alleging some sort of collusion or coercion to steal the material. Pollack says allegations along those lines wouldn’t be out of the realm of possibility given the Obama administration’s naming of journalists as “unindicted co-conspirators” in cases involving leaks of classified information.

“I think that the problem they have is they really can’t distinguish [Assange] from the New York Times or the Washington Post or Mother Jones,” Pollack says, and “they may recognize that legally they would have real problem doing so.”

It’s unclear how far along the government’s investigation is. Pollack says he has no idea and noted in an August 2016 letter to then-Attorney General Loretta Lynch that the limited information he gets about the investigation comes through filings in other cases. Assange said during the January 19 press conference, based on responses to Freedom of Information Act lawsuits against the government by other parties, that the FBI investigation alone has produced at least 45,135 pages of documents. Hacked emails from the private intelligence firm Stratfor, published by WikiLeaks in 2012, suggested the US government had a sealed indictment in early 2011, but in 2013, unnamed officials told the Washington Post that there was no sealed indictment.

“It really is unique in my experience,” says Pollack, who has worked in federal criminal defense for 25 years. “I’ve never had a matter where the Department of Justice would not discuss my client’s situation with me, much less one where simultaneously they’re providing the public with at least some information.”

But Bradley Moss, a national security lawyer in Washington, says it doesn’t seem unusual to him.

“In a situation where there is a sealed indictment, the DOJ is not obligated to reveal details of pending charges to the subject or his lawyer until the subject is actually arrested,” Moss says. “To hold otherwise would nullify the purpose of the seal.”

Both Pollack and Assange seem to want the case to move forward. Pollack says the Justice Department could resolve the situation by declaring that there’s no indictment or by telling him what exactly investigators are seeking from Assange.

“Maybe it’s that they’re perfectly happy to leave him in limbo in the embassy,” Pollack says. “But that, to me, is not justice…What they should do is they should engage and say either we’re not pursuing him or we are. And if they’re not, great. And if they are, let’s discuss what that means.”