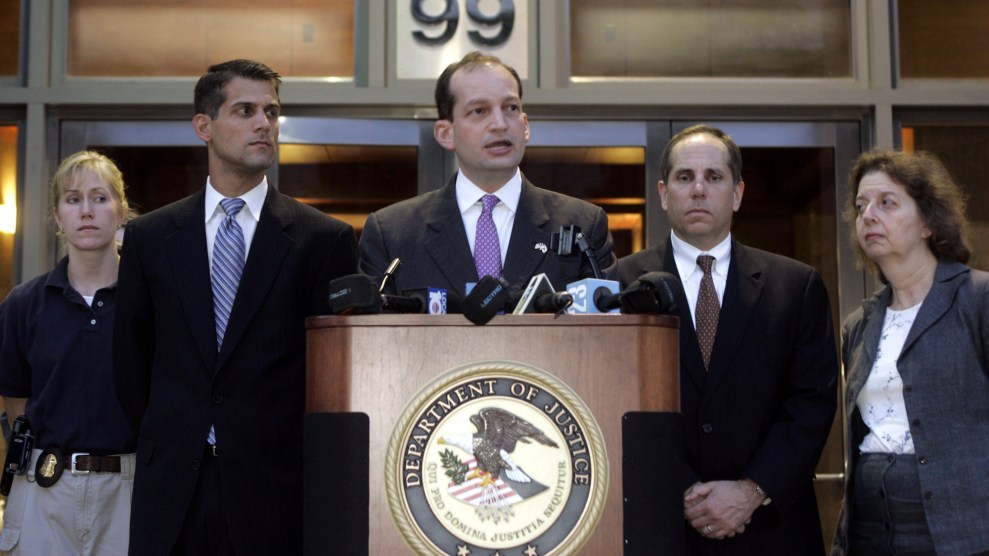 At a press conference Thursday afternoon, President Donald Trump announced Florida International University College of Law Dean R. Alexander Acosta as his next nominee to oversee the US Department of Labor. The decision comes after a slew of scandals and mounting pressure from Republicans derailed Trump’s previous pick, fast-food executive Andrew Puzder, who withdrew his name from contention on Wednesday, a day before his confirmation hearing was scheduled.

Trump lauded Acosta’s credentials as a Harvard Law School graduate, a former clerk for Supreme Court Justice Samuel Alito, and a member of the National Labor Relations Board, emphasizing that Acosta had previously been confirmed by the Senate three times. “I’ve wished him the best,” Trump told reporters. “I think he’ll be a tremendous secretary of labor.” If confirmed, Acosta would be the only Latino in Trump’s Cabinet.

But Trump didn’t mention one of Acosta’s less admirable roles. Acosta served as assistant attorney general of the Justice Department’s Civil Rights Division from 2003 to 2005 under President George W. Bush—the first Latino in that role—and was at the center of a scandal over hiring practices. During Acosta’s tenure, Brad Schlozman, a deputy assistant attorney general, “improperly considered political and ideological affiliations” when he hired attorneys to work at the Civil Rights Division, according to a Justice Department inspector general report written in 2008. “Attorneys hired by Schlozman were more than twice as likely to be Republican or conservative than those attorneys Scholzman was not involved in hiring,” the report found. That consideration, the report concluded, violated the Civil Service Reform Act and department policy that bars discrimination in hiring based on political and ideological affiliations.

The agency concluded that Acosta and other Civil Rights Division managers failed to “exercise sufficient oversight to ensure that Schlozman did not engage in inappropriate hiring and personnel practices.” Specifically, Acosta and Deputy Attorney General Wan Kim “failed to ensure that Schlozman’s hiring and personnel decisions were based on proper considerations,” the report noted.

When Acosta first took over as law school dean in 2009, H. T. Smith, director of FIU’s trial advocacy program, told the Miami New Times that Acosta’s stint at the Civil Rights Division “caused a rift with the black community,” adding that the former Miami prosecutor needed to meet with faculty members to heal that divide. The NAACP’s Miami-Dade branch expressed concern, telling the Miami Herald at the time of Acosta’s hire that his “lack of diversity in hiring and promotion while serving as U.S. attorney gives cause for concern for his consideration as dean of FIU’s College of Law.”

Kristen Clarke, executive director of the Lawyers’ Committee for Civil Rights Under Law, condemned the “egregious conduct” that played out during Acosta’s time at the Justice Department. “It is hard to believe that Mr. Acosta would now be nominated to lead a federal agency tasked with promoting lawful hiring practices and safe workplaces,” Clarke said in a statement released after Trump’s announcement.