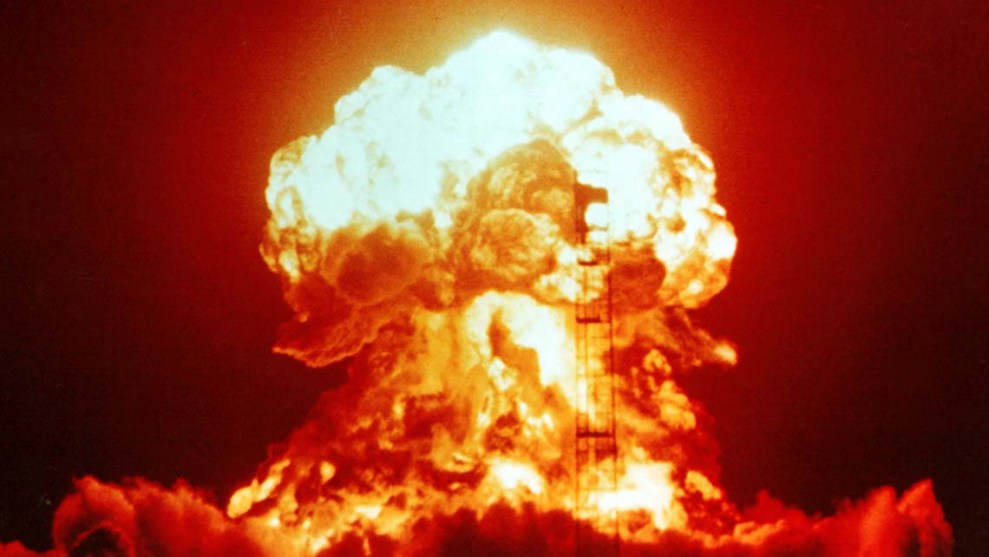 Update, 4/3/17: Senate Democrats now have enough votes to filibuster Neil Gorsuch’s nomination for the Supreme Court. Sen. Chris Coons (D-Del.) announced Monday afternoon that he would vote against proceeding to an up-or-down vote on Gorsuch, bringing the total number of Democrats who support a filibuster to 41. That sets the stage for a high-stakes showdown in the Senate. On NBC’s Meet the Press Sunday, Senate Majority Leader Mitch McConnell (R-Ky.) indicated that he would trigger the so-called “nuclear option” if the Democrats decided to filibuster Gorsuch. Read our explainer on the nuclear option below:

Neil Gorsuch’s confirmation hearings are still weeks away, but Democrats and Republicans are gearing up for what could be an epic showdown over the Supreme Court nominee. Mere hours after Justice Antonin Scalia died last February, Senate Majority Leader Mitch McConnell insisted that the vacant seat should be filled by the next president, rather than the sitting one. Republicans refused even to hold a hearing for Barack Obama’s nominee, Judge Merrick Garland, effectively stealing the seat in the view of many Democrats. Last week, President Donald Trump announced Gorsuch, a conservative appellate court judge, as his choice to fill the vacancy. Some Democrats—pushed by constituents and liberal groups—are calling for a filibuster to block the appointment. Trump responded on Wednesday, urging McConnell to “go nuclear” if Democrats attempt to filibuster Gorsuch.

As the Senate and the president careen toward a major political fight, here’s what you need to know about the Supreme Court, the filibuster, and the so-called “nuclear option.”

What is a filibuster, and how is it used?

You’re probably aware that there are 100 members of the US Senate and that it (theoretically) takes a majority—generally 51 votes, unless someone isn’t voting—to pass legislation and approve presidential appointments. Simple, right? Not exactly. The Senate’s rules also make it possible for a minority of senators to prevent a vote from occurring, effectively killing a bill or a Supreme Court nomination. This is called a filibuster.

There are a couple ways to use the filibuster. In the classic Mr. Smith Goes to Washington version, a senator will stand on the floor and “debate” for as long as possible to prevent a vote from taking place. The late Sen. Strom Thurmond (R-S.C.) holds the record for the longest filibuster; he spoke for 24 hours and 18 minutes against the Civil Rights Act of 1957. Modern filibusters tend to be less dramatic. In order to end debate on a matter and proceed to a final vote, Senate rules generally require a supermajority—that is, 60 members—to first agree to what is known as a cloture motion. By voting against cloture, a minority of senators can prevent the body from taking action. There are currently 52 GOP senators, which means that even if every Republican voted for cloture, they would still need the support of eight Democrats to break a filibuster.

What is the nuclear option?

The ability to filibuster legislation and Supreme Court appointments has persisted for so long in part because the Senate’s rules are difficult to change. It takes a two-thirds vote to amend the rules, and it’s been half a century since either party controlled two-thirds of the Senate. But the majority party has another—much more controversial—option at its disposal: the nuclear option. Rather than change the Senate’s rules, Republicans could simply decide to reinterpret existing rules, an action that would require just 51 votes. In essence, a bare majority of senators could declare that 60 votes are not in fact needed to end debate and proceed to a vote on Gorsuch’s nomination. What’s more, this wouldn’t be a one-time exception: It would set a new precedent that kills the filibuster for Supreme Court nominations.

Why is it called the “nuclear option”?

The term was originally a reference to the expected impact on the Senate’s ability to function if the majority party overrides the rules and ends the filibuster. In short, the relationship between the parties might break down, and the body could (figuratively) blow up. During George W. Bush’s presidency, Republicans threatened to get rid of the filibuster if Democrats continued to block Bush’s appellate court nominees. Democrats responded by issuing their own threat: If Republicans banned the filibuster, Democrats would essentially shut down Senate operations. (Former GOP Sen. Trent Lott of Mississippi was apparently the first to refer to the proposal as the “nuclear option.” Republicans later decided it would be more popular if they called it the “constitutional option,” but the original name stuck.)

Ultimately, a bipartisan group of senators, known as the Gang of 14, reached a compromise. The 2005 deal allowed for three of Bush’s nominees to come to an up-or-down vote while letting the Democrats block two others. As part of the bargain, the Republicans agreed not to support the nuclear option, and the Democrats agreed not to filibuster judicial nominees except under “extraordinary circumstances”—a term that was left undefined.

Has the nuclear option ever actually been used?

Yes, very recently. In 2013, Democrats eliminated the filibuster for most presidential nominations so that Obama’s executive and lower-court appointments could be confirmed with a simple majority of votes. Democrats finally went nuclear after Republicans filibustered a number of Obama’s nominees—even some of his picks for obscure federal agencies. The new precedent contained one big exception: It didn’t eliminate the ability to filibuster Supreme Court nominees.

Despite warnings from Republicans that the move would blow up the Senate, the GOP didn’t retaliate in a major way. Republicans won back control of the Senate in the 2014 election, taking the issue temporarily off the table.

So what happens now?

Republicans know they’ll face a tough battle if the filibuster remains intact and Democrats attempt to use it to block Gorsuch. Even if all 52 Republicans support Gorsuch, they would still need to persuade eight Democrats to vote for cloture. In a recent interview with CNN, McConnell wouldn’t say whether he’ll “go nuclear,” as Trump has suggested, but he hasn’t taken the option off the table. If he does opt to trigger the nuclear option, it would be an extension of what Democrats did in 2013, except now Supreme Court nominees would be included in the precedent. This would allow Gorsuch to be confirmed with a simple majority vote, leaving Democrats essentially powerless to block him.

What would be the repercussions for the Senate if Republicans use the nuclear option?

The Senate’s ability to compromise and work across the aisle has been declining for years, leading to more gridlock—which is the No. 1 reason the American public is critical of Congress. Using the nuclear option to push through Gorsuch’s nomination probably wouldn’t do much to rebuild trust between the parties, but it might make the Senate look more productive.

More significantly, if the judicial filibuster is killed, Trump would be able to make future Supreme Court appointments without worrying about pushback from Democrats. And since Democrats have little hope of regaining control of the Senate in 2018, Trump would essentially have a free hand to fill any vacancies for the next four years. That could be a big deal: Three justices (two liberals and one swing vote) are currently 78 or older, so the nuclear option could potentially give Trump the ability to reshape the court for decades to come.

What will the Democrats actually do?

That’s still unclear. Democrats remain divided on whether or not they’ll actually attempt to filibuster Gorsuch. Like Gorsuch, Scalia was extremely conservative, so Gorsuch’s appointment wouldn’t alter the previous balance of the court. Some Senate Democrats want to let Gorsuch go through the normal nomination process. That way, they argue, Republicans won’t immediately kill the filibuster, and Democrats will still have the option of attempting to block a future Supreme Court nomination if one of the liberal justices steps down or dies during Trump’s presidency. As CNN explains, “Preserving the filibuster now could give Democrats more leverage in the future, proponents of this strategy say.”

Other Democrats, however, are ready to filibuster. They point to the GOP’s treatment of Garland, and they would likely have the support of liberal activists, who are urging Democratic lawmakers to fight Trump at every opportunity. “This is a stolen seat being filled by an illegitimate and extreme nominee,” Sen. Jeff Merkley (D-Ore.) said in a statement last week. “And I will do everything in my power to stand up against this assault on the Court.”