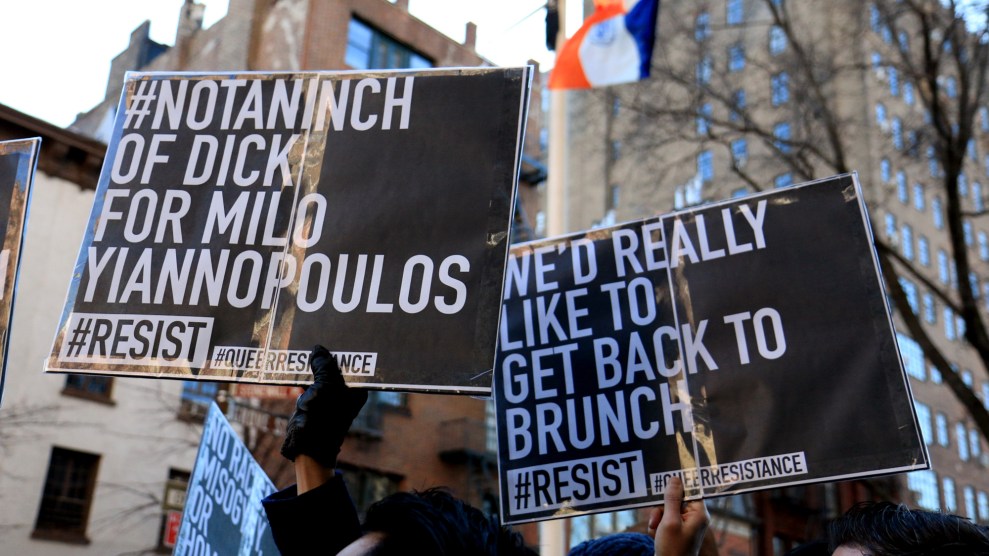 Emptying out from brunch spots wielding wickedly pointed signs, and chanting, “We want a leader, not a creepy tweeter!” thousands of anti-Trump demonstrators from the LGBT community met for a rally on hallowed turf on Saturday afternoon: the plaza outside the Stonewall nightclub in New York City’s West Village—recently designated by the Obama administration as a National Monument for its historic role in the long fight for gay rights. 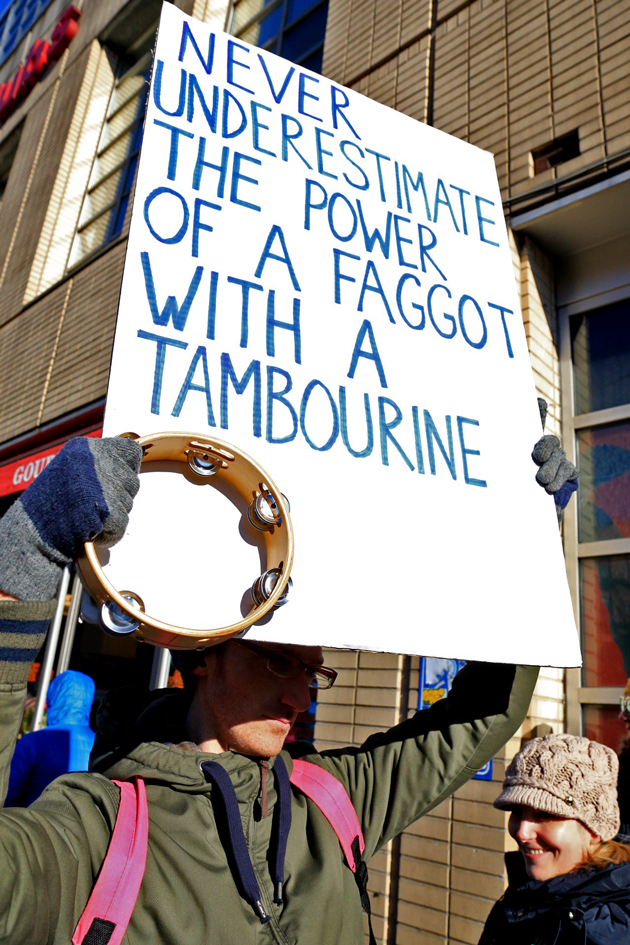 Schumer’s pledge to block Betsy DeVos, Trump’s pick for education secretary—”She can take her conversion therapy back to Michigan!”—was, on the other hand, met with cheers and applause. 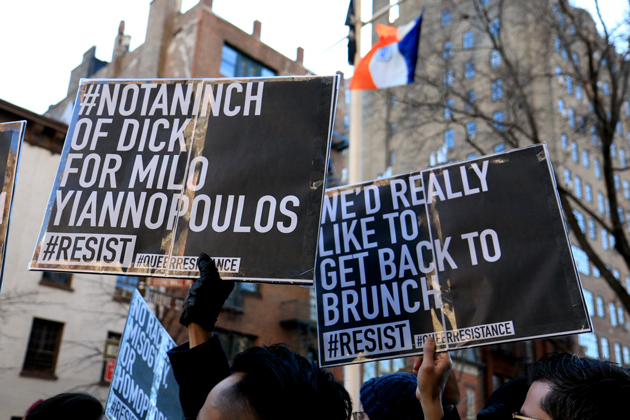 But it was clear from talking to multiple people in the LGBT community and their allies on this chilly but sunny Saturday that battle-lines have been drawn: many felt there could be no compromise with the Trump administration.

“It’s time to stop giving in,” said Alan Brodherson, a 52-year-old attorney. “Over the years, that’s what the Democrats have consistently done.”

“I don’t believe in complacency,” he said. “Be vigilant.”

Taylor James, a 29-year-old Canadian dancer and photographer who now lives in Los Angeles, was also impressed by the renewed sense of purpose amongst protesters. “It’s inspiring. In 50 years, in 40 years, I’ll look back to see how I stood up,” he said. “It feels very personal.” 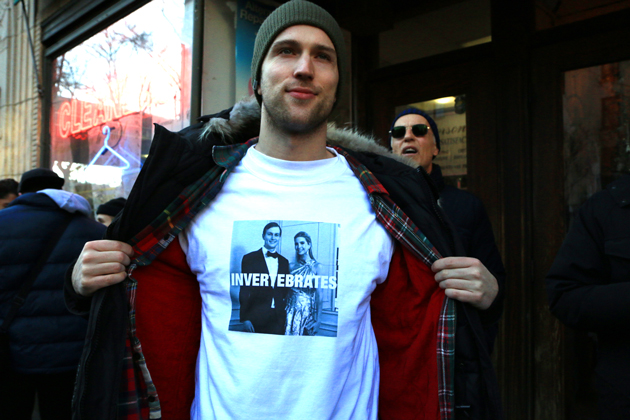 Taylor James, 29: “When you’re a liberal, you’re fighting to get to ground zero.”

Most people I spoke to said they turned up to show solidarity with the immigrants and refugees targeted by President Donald Trump’s executive order temporarily barring travel from seven predominantly Muslim countries, along with suspending America’s refugee program. (The Trump administration suffered a set-back on Friday night when Judge James Robart of Federal District Court in Seattle issued an order temporarily blocking Trump’s executive action.)

Jaimie McGovern, 29, showed up simply because “the LGBT community is across every spectrum. We’re Muslim, we’re Hispanic.” She surveyed the turnout: “This is fantastic.” 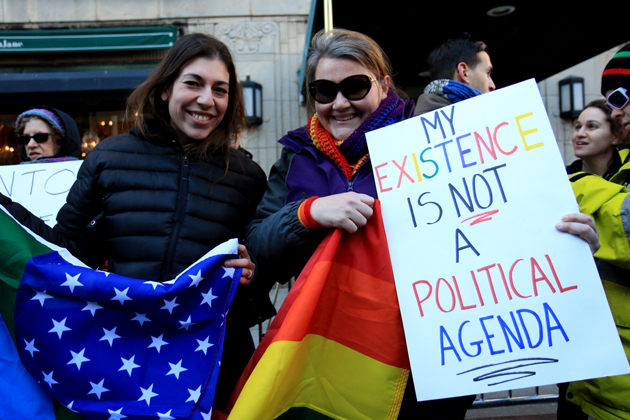 Marissa Nargi, left, and Jaimie McGovern, both students, turned out to show their support for immigrants and refugees. James West

“We’re not going to stand by while Trump takes away rights one by one,” said IT worker David Vazquez, 31. “It seems like every day he comes out with something new. We need to keep from being discouraged.”

Mike Hisey, dressed as Kellyanne Conway with a blond wig and an outfit that evoked her now-famous inauguration getup, stood outside Stonewall itself, attracting a constant stream of requests for photographs with a deadpan face. “Protesting and march works,” he said. 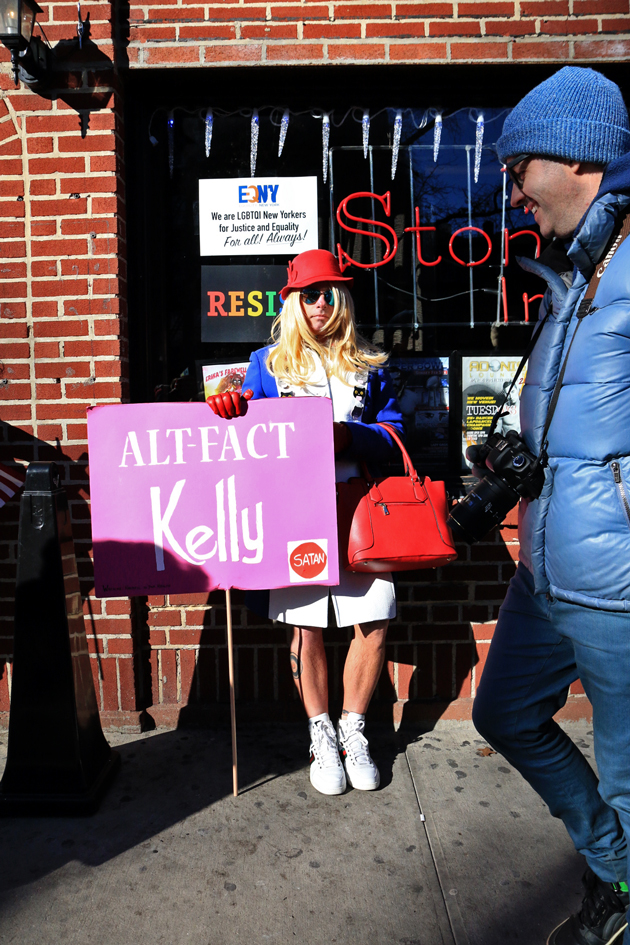