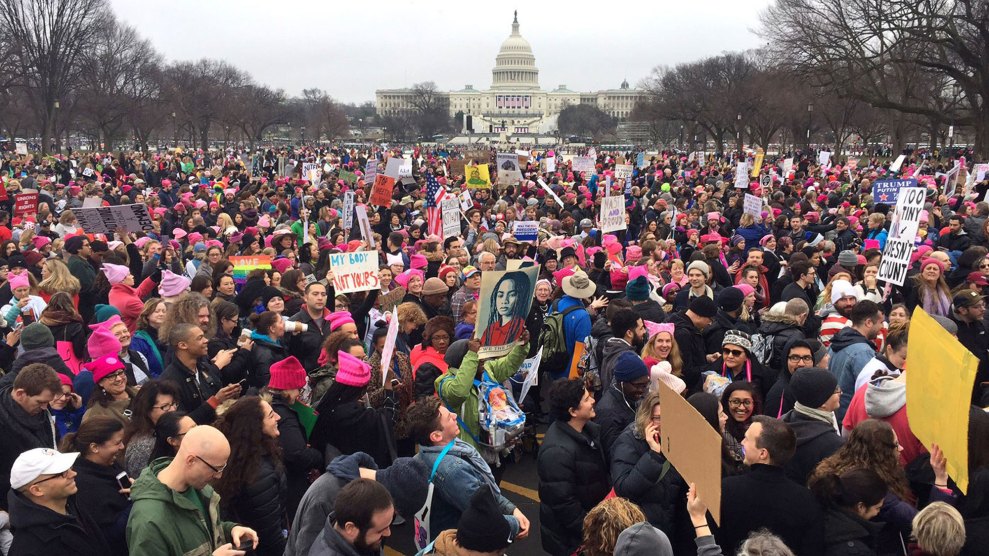 Protesters pass at the Capitol at the Women's March on Washington in January. Organizers have used Trump protests to recruit members for new groups such as Sister District. <a href="https://www.flickr.com/photos/resistfromday1/32550362725/in/photolist-RAn7Nr-Q9UVib-RfKfAn-QCTKW9-GbXzjM-GbXz5i-GbXzBv-GhNLED-FSGn91-GhNMnv-G9DCms-GhNLAv-Fnx84H-G9DBq9-Fnx6Hr-GbXyVk-RpvXzR-QSqvBd-GfvSSL-RsWgfo-RKvP1s-RkP4iU-RZ3TY7-RkP4Fs-RkP4p5-RrqPJc-QrVFFs-Qd7Lwv-RrQBfX-Rd5oZY-QSqtiA-Qd7KWx-QSquH9-QCTKZW-QajseJ-QSqv3C-RrqW3K-RtUWwD-Rg9fv6-RrQD2c-Qajpv7-Rg9hAD-RMjsTs-RrQFZX-Qd7K1e-RrQEqp-Rg9gSz-QajtWb-Qajt5m-Rrr6f2">ResistFromDay1</a>/Flickr

Last fall, Rita Bosworth, a public defender in San Francisco, had an epiphany. “I was thinking about how we were choosing between two Democrats for this open Senate seat,” she said. Because California’s open primary system leaves the possibility that two members of the same party will advance to the general election, state Attorney General Kamala Harris faced off against Rep. Loretta Sanchez in the race to succeed retiring Democrat Barbara Boxer. They combined to spend nearly $20 million on the contest, which Harris won, and “all of it was being directed toward a race where it was liberal vs. more liberal,” Bosworth says. “It just struck me that this was silly.” There had to be a better use of progressive manpower.

So in late November, Bosworth launched Sister District, a website that helps activists in safe blue areas support candidates in red states and swing districts who could use the help. Sister District, which boasts about 5,000 members and has been recruiting at anti-Donald Trump protests and on social media, is in the process of filing for tax-exempt status as a 527, allowing it to raise money and donate directly to candidates for state office. It recently joined forces with another organization with a similar agenda, Flippable, on a race they hope will demonstrate the power of the suddenly energized grassroots left: a special election for a Delaware state Senate seat that will determine the balance of power in the state Capitol.

The two groups have already raised more than $87,000 for the Democratic candidate, Stephanie Hansen—a remarkable sum for a state Senate special election in a small market. Sister District members have held five fundraisers, and they have another one planned later this month at a bar in San Francisco’s Mission neighborhood.

In the age of Trump, coastal progressives such as Bosworth have increasingly come to believe that Democrats are fighting not just nativism, but also geography. In an op-ed for the New York Times three weeks before the election, reporter Alec MacGillis neatly summed up the Democrats’ struggles. “Democrats,” he wrote, “just don’t want to live where they’d need to live to turn more of the map blue.” The headline for the story offered a prescription: “If you really want Democrats to win in Iowa, move there.” The geographic clustering of liberals in major metropolitan areas and isolated college towns poses a logistical hurdle. How do you convert excess activist energy in one place into organizing power someplace else?

In addition to Sister District and Flippable—a group focused on state-level races that promises to tell Democrats “which races are most important, who’s running, and how you can support them”—other groups have taken similar approaches to the ever-reddening political map. Resurgent Left, a political action committee led by San Francisco lawyer Kipp Mueller, promises to “use advanced analytics to find Democratic candidates with the best chances to flip their state legislatures blue anywhere in the U.S.” Code Blue, created by a Los Angeles-based executive producer of the Food Network series Cake Masters, has already raised money and made phone calls for state delegate candidates in Virginia, Minnesota, and Connecticut. Adopt-a-State, founded by a Maryland IT professional, invites members to host “adoption parties” to raise money for red-state Democratic parties. (In Brooklyn, supporters are donating to the North Carolina Democrats with proceeds from a monthly Park Slope happy hour.)

These fledgling outfits are more collaborative than competitive. They link to each other’s websites on their home pages, share resources, and talk regularly to coordinate their activities. “There are kind of these subtle variations between the groups,” Bosworth says. “For now, we’re all happy and moving along.” Flippable co-founder Catherine Vaughan, who worked for Hillary Clinton’s presidential campaign in Ohio, calls her like-minded colleagues “the Rebuilds” and keeps in contact with fellow organizers through a Slack group. “I’m in conversations with everyone—it takes up most of my day,” she says. “Among the Rebuilds there’s a really strong sense of ‘We’re all in this together.’ There’s a lot of collaboration.”

Sister District and co. are focused on down-ballot races, both because modest resources in these contests can make a big difference and because state legislatures control decennial redistricting—one of the factors that make the Democrats’ regionalism more pronounced. In Virginia, for instance, Republicans control 66 of 100 seats in the House of Delegates even though they have not won a statewide race since 2009. But there’s also a project for adopting congressional districts: SwingLeft, a site launched by Ethan Todras-Whitehill, a freelance writer and GMAT tutor in Amherst, Massachusetts.

Prior to this year, Todras-Whitehill’s political experience consisted of a few phone calls on behalf of John Kerry in 2004 and a brief stint running get-out-the-vote operations for Barack Obama in 2008 in Warren County, Ohio—one of the white Midwestern communities that swung hardest to Trump in November. A political junkie by habit, he had expected after the election to spend more time working on his fiction. Instead, he found himself at a coffee shop on November 9, playing around with a CNN.com map of every House district in the country.

Western Massachusetts is safe Democratic territory, so Todras-Whitehill searched for the closest district that wasn’t. He settled on New York’s 19th Congressional District, a Hudson Valley seat where Democrat Zephyr Teachout lost by 6 points to Republican John Faso. “I went on Facebook and said I’m gonna focus on 2018 in NY-19,” he says. “And I started thinking, why did I have to do all this work? In this day and age, why isn’t there a tool that will do this for me?”

With two friends from Silicon Valley, he launched SwingLeft one day before Trump’s inauguration and has collected more than 250,000 sign-ups. All you have to do is enter your zip code—then it matches you with the closest competitive district. Users receive regular updates on what’s happening in the district and eventually get further instructions from a volunteer district leader. Although the founders have little political experience themselves, they have been talking to Democratic campaign professionals about how to proceed. (Todras-Whitehill recently finished reading Rules for Revolutionaries, the organizing handbook written by Bernie Sanders campaign veterans Becky Bond and Zack Exley.)

Todras-Whitehill is aware that the perception that a candidate is being propped up by money and manpower from outside the district can be a damaging one—he calls it the “Hollywood effect.” But SwingLeft isn’t matching regions arbitrarily. The point of finding volunteers in neighboring districts is that they’ll already be starting on a shared foundation. Someone who lives in a safe-blue suburban Denver district still has a lot in common with someone who lives in a 50-50 district next door. The goal is for “people to know their swing district better than they know their own representative.”

The need to reconcile the Democratic Party’s uneven distribution of resources has not been lost on the candidates vying for leadership roles in the national party. In addition to full-time organizing hubs in the Rust Belt states Clinton lost, “we should have satellite hubs in Alabama that connect with Philadelphia donors and Baltimore donors,” says Elizabeth Jaff, a candidate for Democratic National Committee vice chair who is also the head of business development and campaigns at the digital fundraising platform Crowdpac. “We should do sister districts, where California picks up different states that they’re funding.”

Rep. Keith Ellison (D-Minn.), a front-runner in the race for DNC chair and a former community organizer, has made cross-pollination part of his campaign message. “What if we took a nice, solid district where there’s a lot of Democrats, and we went out to a red state, and we said, ‘We’re gonna partner you guys together’?” he told an audience of Detroit Democrats in December. “So that we are taking the benefits of what the blue state knows and put it with the red state and we’re sharing. And they’re doing phone banks, helping do some door knocks, help do some fundraising. It would help people understand each other a little better.”

As the institutions of the Democratic Party slowly jolt into motion, the Rebuilds will have to adapt as well. Attrition is inevitable. But for now, with the DNC in a holding pattern as it awaits its leader, the influx of new groups into the same space is chaos by design. “Who knows if Code Blue’s gonna be around in six months,” says its founder, MJ Loheed. “I hope it is, but it’s good to have redundancies. I think it’s a breeding ground for innovation.” Vaughan recalled the message David Plouffe, Obama’s former campaign manager, delivered on a post-election conference call with a small army of Democratic organizers and campaign professionals. Plouffe’s message, as paraphrased by Vaughan: “Let a thousand flowers bloom.”