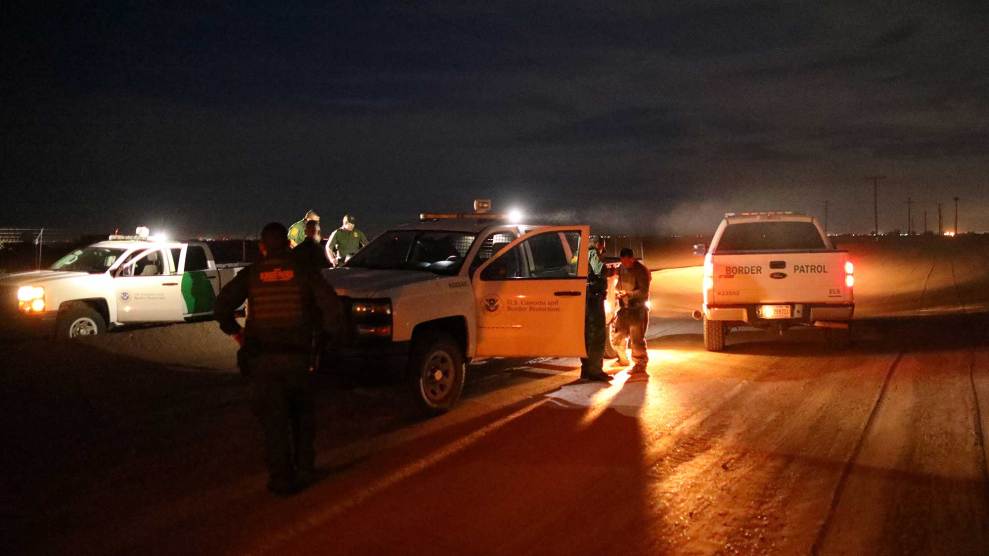 In March 2016, for the first time ever, the Border Patrol union broke free of its “long-standing practice” of not endorsing presidential candidates in the primaries and announced its support for Donald Trump. “We will not…shy away from voicing our opinions,” the union’s statement read. “The lives and security of the American people are at stake.” Trump responded with a promise: “I will never let them down.” A year later, the love affair continues.

As part of his sweeping immigration crackdown, Trump has proposed a massive hiring spree: 5,000 Border Patrol agents and 10,000 Immigration and Customs Enforcement (ICE) agents. It’s the biggest ramp-up since the mid-2000s, when the number of Customs and Border Protection agents quickly doubled as part of the huge post-9/11 security push. But hiring so many new employees so fast—some 17,000 agents over six years—meant CBP couldn’t properly vet its new employees, and it led to a flood of corruption cases and allegations of excessive use of force. And now, in the face of a similar situation, former CBP employees and policy experts are sounding the alarms about Trump’s new plans—and the government’s ability to vet the thousands of new hires.

CBP has requested approval to ease its stringent hiring standards, which include background investigations and polygraph exams mandated by Congress in 2010.

According to leaked internal memos from Acting Commissioner Kevin McAleenan, first reported by Foreign Policy, CBP has requested approval to ease its stringent hiring standards, which include background investigations and polygraph exams mandated by Congress in 2010 after the misconduct allegations came to light. The polygraphs are particularly unpopular; according to a former DHS official, they were “insanely cumbersome” and a reason why the agency has trouble recruiting.

James Tomsheck, who headed CBP internal affairs during the last hiring surge, thinks that’s nonsense. Calling out the polygraph exams is “nothing more than a thinly veiled effort to discredit the polygraph program to achieve hiring mandates that are unrealistic and certain to compromise the future integrity of CBP,” he says. While the tests haven’t eliminated corruption within the agency, Tomsheck says they have dealt it a blow.

He points to 2012, when he began requesting a scientific review of 1,000 randomly selected polygraph exams given to people after they had cleared a background investigation. More than half of them failed it, and the majority gave detailed admissions about why: Some were involved in smuggling, and others had committed felony crimes. But “the most hair-raising of it,” says Tomsheck, is that some were “infiltrators”—people who worked for criminal organizations and were told to seek employment at CBP. For Tomsheck, it confirmed what he long suspected: that background investigations weren’t enough on their own. (In 2014, the agency removed Tomsheck from internal affairs. He claims, as have his supporters inside the agency, that he was pushed out for being too aggressive in going after corruption and calling for meaningful reforms.)

“If you’re lowering standards, you’ll have people with less education, less discipline, less sensitivity in dealing with people who are not criminals, and also some cases of human rights abuses.”

Adam Isacson, the senior associate for defense oversight at the Washington Office on Latin America, says CBP is “going in the wrong direction.” “If you’re lowering standards, you’ll have people with less education, less discipline, less sensitivity in dealing with people who are not criminals, and also some cases of human rights abuses,” he says. “You may have people with, if not criminal records, then misdemeanors.”

As part of last year’s National Defense Authorization Act, Congress gave CBP the right to waive the polygraph test for any military veteran with a Top Secret clearance. In the internal memo leaked on Tuesday, CBP asked to expand who can skip the polygraph exams to include state, local, and federal law enforcement officers and other military veterans who have received or are eligible to receive honorable discharges.

Tomsheck thinks this is a dangerous proposal. Former military and law enforcement personnel were just as likely to fail the polygraph exams as civilians, he says, adding, “Some of the most significant corruption cases and excessive use-of-force problems were CBP officers or Border Patrol agents who had been in the military and had served in combat.”

In recent years, despite what the memo calls “aggressive recruitment efforts,” CBP has struggled to maintain its staffing levels. Just to avoid shrinking, it needs to hire 1,000 agents each year. According to the memo, to meet Trump’s mandate, it will have to hire more than 2,700 Border Patrol agents each year for the next five years. (Last year it only managed to hire 485.) At the same time, it will be competing with ICE, which will be hiring even more new agents and offers better pay and more desirable locations than Border Patrol—on top of also not requiring polygraph exams.

Some observers say one reason CBP has struggled with maintaining its staffing levels, however, is that the agency doesn’t have enough certified polygraph examiners to conduct the tests. While the 2010 Anti-Border Corruption Act mandated polygraph exams, it was never properly funded. Tomsheck argues that Border Patrol has long been opposed to the exams, and not just because they’re cumbersome: He claims that the Border Patrol union leader Brandon Judd “opposed every integrity proposal” he made during his eight years at CBP. (The National Border Patrol Council did not respond to requests for comment.)

In 2012, a Government Accountability Office (GAO) report echoed Tomsheck’s complaints, stating that CBP “does not have an integrity strategy.” It uncovered a culture of resisting the Office of Internal Affairs and found that the agency failed to consistently conduct monthly quality assurance reviews, hampering its ability to curb future corruption.

In an emailed statement, a CBP spokesperson said, “U.S. Customs and Border Protection will maintain our current high standards of recruiting the best America has to offer. To meet our critical hiring needs we are exploring ways to recruit individuals that the Federal government has already vetted to work in sensitive positions, such as military and federal law enforcement officers while also working to omit redundancies in the hiring process. The Anti-Border Corruption Act of 2010 mandates CBP administer polygraph examinations to all applicants for law enforcement positions with CBP. CBP will continue to abide by all statutory requirements for hiring.”

Isacson argues that CBP doesn’t need more agents—it just needs to place them in areas where there are too few. But, he allows, it takes incentives to do so: “One unattractive thing with Border Patrol compared to other agencies is you might end up in like Deming, New Mexico, in the middle of nowhere. The quality of life issues for the kind of pay you’re getting aren’t great.” Or, as Tomsheck puts it, “If you’re posted in Presidio, Texas, the closest thing to culture is a Walmart about an hour and a half away.”

Joshua Breisblatt, a policy analyst at the American Immigration Council (AIC), sees another potential problem. In past hiring surges, “you saw a huge increase in the budget for Border Patrol and CBP, but you did not see a corresponding increase in the oversight—in the DHS civil rights and civil liberties budget, nor in the DHS inspector general’s budget.”

Now, several years later, morale among Border Patrol agents is higher than it’s been since perhaps the Bush administration. Appearing on The O’Reilly Factor in January, Border Patrol union president Brandon Judd said, “We feel we now have a president that we can trust and that has the political will to finally secure the border. We expect to see an awful lot of policies that have undermined border security changed in the near future.”