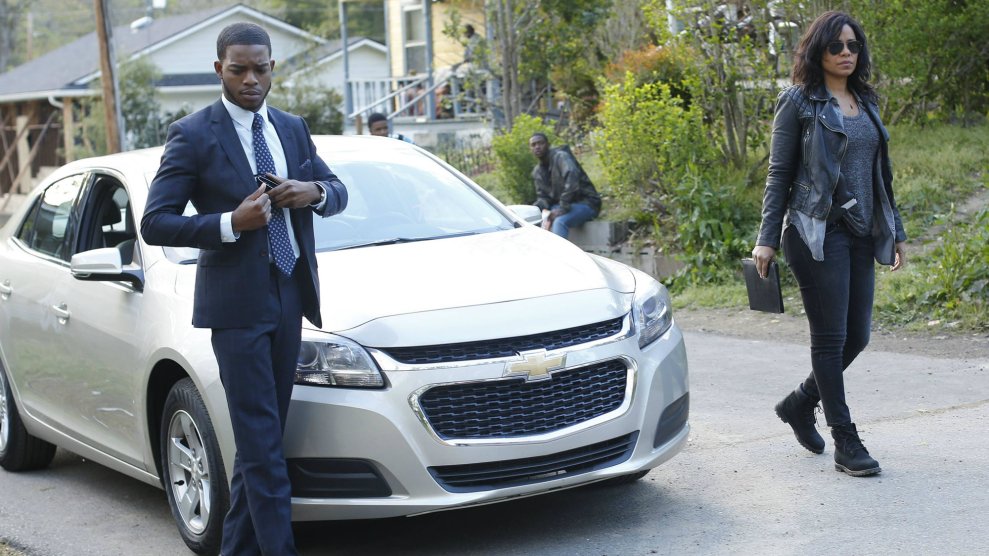 Shots Fired—a 10-part drama series that premieres on Fox on March 22—is a gripping examination of police violence and racial injustice in America. The show stars Stephen James (Race, Selma) and Sanaa Lathan (Love and Basketball, Alien vs. Predator) as Department of Justice officials called by the governor into a fictional North Carolina town to look into the fatal shooting of a young white man by a black sheriff’s deputy. (Richard Dreyfuss, whose son works for Mother Jones, appears as a powerful real-estate mogul.) The conflict escalates when the investigators learn of another killing—of a black teen whose mother had been warned by sheriff’s deputies to keep quiet—that has gone all but unnoticed by the town’s white residents. As the storylines unfold, the show offers sharp commentary on the human toll of violence and the role of race in the criminal justice system.

The series was created, written, and directed by husband-and-wife duo Reggie Bythewood (who most recently directed the TV series Gun Hill) and Gina Prince-Bythewood (director of Love and Basketball and The Secret Life of Bees). I caught up with Reggie earlier this week to talk about who inspired the show and what will happen to police accountability under the Trump administration. Watch the trailer, and then we’ll talk.

Mother Jones: Okay, this seems obvious, but I’ll ask anyway. What made you want to do a show about police shootings?

Reggie Bythewood: We have two boys. In July 2013, as the George Zimmerman verdict was being announced on TV, I sat down with my oldest son, then 12 years old. He got emotional when the verdict came back not guilty. Instead of hugging and consoling him, I pulled up an Emmett Till documentary on YouTube and made him watch it. Then I talked to him about the criminal justice system and how in many cases it doesn’t work.

It was the first real man-to-man talk we had. It was also the first time Gina and I felt like we wanted to be a part of the conversation. Not just as parents and black people, but as artists. We had been thinking about making a movie since then. But after Ferguson, Fox approached us about doing a series. We jumped at the idea, because a movie would have been a 90-minute version of the story instead of the 10-hour series we created.

MJ: One of the two shootings investigated on the show involves a white victim and a black cop. Usually we see the opposite. Why did you flip it?

“Part of our goal was to make the victims—all the characters, really—human.”

RB: I want to stress that Shots Fired is not about a black cop who kills a white kid. It’s about the shooting of an unarmed white guy and an unarmed black guy. We wanted to create a narrative where we could look at both cases. But to answer your question, there were a lot of people who never saw Trayvon Martin as a kid. He was painted as the victimizer. And Zimmerman got donations from all over the country. So in doing a show that deals with police violence, the question was how do we make those people who sent in the donations see this kid as a human being? One of the things we came up with was to just make one victim white.

MJ: In Jesse’s case—he’s the white kid who is killed—you have these themes of grief and injustice projected onto a white family that are more familiar to a black audience. Then you have a black cop whose life is thrown into disarray—a notion that might resonate more with people who empathize with the police—and that idea is projected onto a black family. That seems instructive for people on both sides of the fence. 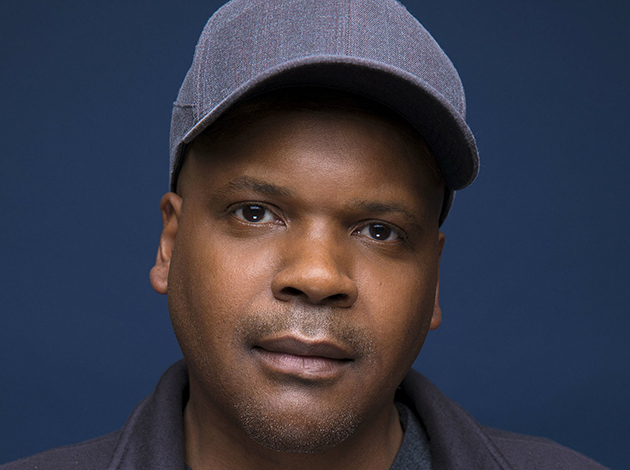 RB: We wanted to let people understand what a mother feels when her son is killed and is painted as the victimizer. We also wanted every character to be three-dimensional and human. Some people are coming into it seeing things from the cop’s point of view who would not ordinarily think that way, but that’s an unintended consequence of the way we approached our primary goal.

MJ: Your research process has been grueling. Tell me about it.

RB: Our writers read articles. We watched the Jordan Davis documentary and several others. We had a two-hour Skype meeting with former Attorney General Eric Holder. We spoke with Ray Kelly, the former police commissioner of New York. He’s a proponent of stop-and-frisk—I’m not. But if you really want to do a good job, you can’t just talk to people who share your point of view. We spoke with Michelle Alexander [author of The New Jim Crow], and we read Between the World and Me [by Ta-Nehisi Coates]. We talked to people who have been victims of police misconduct. We talked to black cops and white cops. One of our staff writers, J. David Shanks, a black guy, was a police officer in Chicago for six years. One of the people whose words really resonated with us was Wanda Johnson, the mother of Oscar Grant.

Oscar Grant’s mom came in “and talked to us about what it’s like to watch people lose sight of the fact that [her son was] a human being.”

MJ: What did she say?

RB: She came to the writers’ room and talked to us about what it’s like as a mother to see your child become a symbol—of civil rights for some, and of anti-law-enforcement, of hate, for others—and watch people lose sight of the fact that this is a human being. So part of our goal was to make the victims—all the characters, really—human, and to make people empathize.

MJ: The DOJ launched investigations into two police shootings while you were filming last summer—Alton Sterling and Philando Castile. Did that affect production at all?

RB: It was emotional on set when these incidents happened. There was a day when we had a prayer circle because it was hard to continue with the subject matter. It was amazing to see the extras crying on set. But those shootings reminded us that we had a cause. Yes, we’re artists. Yes, we’re doing a TV show to entertain. But this is all for real.

MJ: Now we have an attorney general—Jeff Sessions—who indicates that the Department of Justice will pull back on investigating police abuses. Yet your main characters are DOJ people doing exactly that.

RB: We assumed Hillary Clinton would be the next president and that there wouldn’t be a drastic shift at the Department of Justice. But I think the show is more relevant now in a way that we didn’t expect, because it highlights the importance of having a DOJ that listens to the people it serves, the urgency of these cases, and the need to have a responsive DOJ. I hope we expand that conversation.