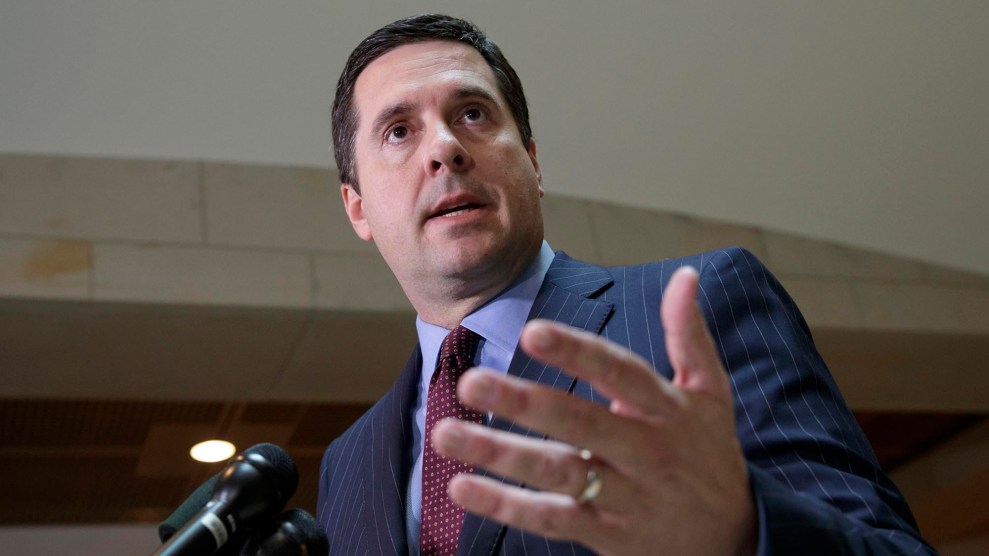 Rep. Devin Nunes (R-Calif.), the lawmaker overseeing one of the main investigations of the Trump-Russia scandal, went rogue on Wednesday when he told reporters that a source had provided him information that indicates that the US intelligence community collected intelligence on Trump associates—possibly Donald Trump himself—in the course of authorized surveillance aimed at other targets. Nunes, who chairs the House intelligence committee, said this happened during the transition period and was unrelated Russia’s meddling in the 2016 campaign or to Trump associates’ connections to Russia. Without revealing any real evidence of wrongdoing, Nunes suggested that something amiss had occurred when the identity of these Trump-related people were noted in reports disseminated in intelligence channels.

Nunes’ theatrical press conferences—not one but two!—indicated he was perhaps more concerned about politics than national security and the protection of civil liberties. At his first presser, held in the Capitol, Nunes described the materials he had been given as “normal incidental collection” and “all legally collected foreign intelligence.” Nonetheless, he said, he was “alarmed” by the fact that some of the Trump associates had been “unmasked” in the reports. (“Incidental collection” refers to Americans whose communications are monitored not because they are the target of the surveillance, but because the person they are communicating with is the target. The identities of these non-targeted Americans generally are supposed to remain hidden in intelligence reports, but there are rules that allow their identities to be unmasked in such reports when that provides needed context.)

“The job of the committee is to do oversight of the executive branch, not to bring them into their investigation or tip them off to things they may be looking at. I’ve got to believe that other members of the committee are horrified at what they just witnessed.”

Still, Nunes said he was rushing to the White House—without even having spoken to the Democratic members of his committee about this—to brief Trump immediately. “They need to see it,” Nunes told reporters before he dashed off to 1600 Pennsylvania Ave.

But when asked whether Trump was specifically and intentionally targeted—a sensational claim that would bolster Trump’s widely debunked March 4 tweets accusing former President Barack Obama of “wire tapping”—Nunes said he wasn’t sure. In fact, nothing Nunes said would back up Trump’s tweets. He was referring to legally authorized surveillance conducted under a court order that targeted a foreign intelligence source but that happened to also pick up Americans—not an uncommon occurrence.

At his White House press conference—following his meeting with Trump—a reporter asked, “But just to clarify, this is not intentional spying on Donald Trump?”

“I have no idea,” Nunes replied. “We won’t know that until we get to the bottom of: Did people ask for the unmasking of additional names within the president-elect’s transition team?”

This was a disingenuous response. Nunes had earlier acknowledged he was only referring to officially authorized surveillance, which could not be ordered by a president. (There’s a whole process through which the FBI and other intelligence agencies go to a special court to receive permission to conduct surveillance.) Yet here was Nunes slyly hinting that well, just maybe, this would back up Trump’s fact-free charge. This was the tell. If he were only concerned with the unmasking of Americans caught up in incidental collection, Nunes could have instructed his committee staff to examine the matter and worked with Democrats on the committee on how best to handle the matter. Instead, he ran to the White House to share his information with the fellow who is the subject of an investigation Nunes is overseeing. Nunes was pulling a political stunt to provide Trump some cover.

And Trump took the cover. After Nunes’ briefing, the president told reporters that he felt “somewhat” vindicated by what Nunes reported to the public on Wednesday. “I very much appreciated the fact that they found what they found.” The revelations, though, don’t vindicate Trump at all; he accused President Obama of directing the phones in Trump Tower to be tapped in October. Nunes’ new information refers to incidental collection after the election. Trump compared the situation to “Nixon/Watergate,” and called Obama a “Bad (or sick) guy!” Nunes made clear the surveillance was legal. Trump suggested Obama had somehow broken the law.

Adding to the political nature of what Nunes did is the fact that he didn’t consult with Rep. Adam Schiff (D-Calif.), the ranking Democrat on the House committee, before he briefed Republican House Speaker Paul Ryan, reporters (twice), and the White House.

“I’m going to be meeting with Mr. Schiff at some point to talk about where we go with this investigation,” Nunes told reporters when the issue came up after he briefed the president. “I had to brief the speaker first, then I had to talk to the CIA director, the NSA director, and I’m waiting to talk to the FBI director…Then I went and talked to all of you…and then I voted, and then I said I was coming here to brief the president, and then I’ll be glad to talk to others later.”

“This information should have been shared with members of the committee, but it has not been,” Schiff said. “Indeed it appears that committee members only learned about this when [Nunes] discussed the matter this afternoon with the press. [Nunes] also shared this information with the White House before providing it to the committee, another profound irregularity, given that the matter is currently under investigation. I have expressed my grave concerns with [Nunes] that a credible investigation cannot be conducted this way.”

Schiff added that Nunes told him that most of the names within the intelligence reports were, in fact, masked, “but that he could still figure out the probable identity of the parties.” This means that the intelligence agencies followed the law, Schiff said, and “moreover, the unmasking of a US Person’s name is fully appropriate when it is necessary to understand the context of collected foreign intelligence information.”

Jeremy Bash, who formerly served as chief counsel for the Democrats on the committee, said Wednesday that what Nunes did was unprecedented and very concerning.

“I don’t think in the 40 years of the committee’s existence, since the post-Watergate-era reforms, with the Church and Pike committees that emerged from those scandals, I have never heard of a chairman of an oversight committee going to brief the president of the United States about concerns he has about things he’s read in intelligence reports,” Bash told MSNBC Wednesday afternoon. “The job of the committee is to do oversight of the executive branch, not to bring them into their investigation or tip them off to things they may be looking at. I’ve got to believe that other members of the committee are horrified at what they just witnessed.”