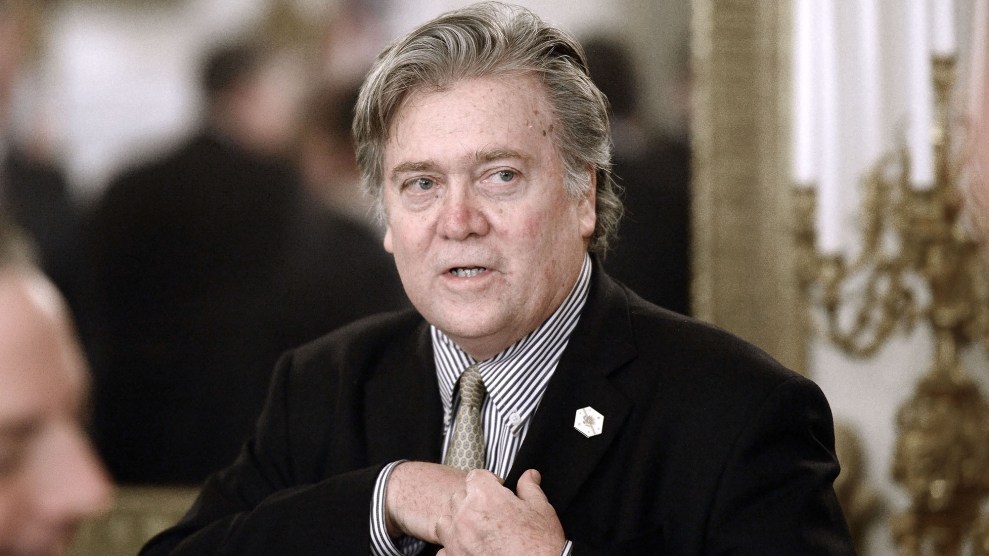 Stephen Bannon, President Donald Trump’s chief strategist, recently spoke approvingly of the ideas of an anti-Semitic French intellectual who was sentenced to life in prison for cooperating with the Nazis during World War II.

In an article on Bannon’s interactions with European right-wing nationalists who want to break apart the European Union, Politico reported last week that Bannon has “expressed admiration for the reactionary French philosopher Charles Maurras, according to French media reports confirmed by Politico.” Recent articles in French media claim Bannon favorably cited Maurras to a French diplomat. Politico describes Maurras as a Catholic nationalist—like Bannon—and notes that Bannon has parroted several of Maurras’ ideas. A hero to members of Europe’s far right, Maurras is a natural fit for Bannon, who has expressed support for Brexit and France’s National Front movement and is known to hate the European Union.

But Maurras was more than a nationalist. He was an infamous anti-Semite, whose anti-Jewish views were central to his outlook. From 1908 to 1944, Maurras edited the anti-Semitic paper L’Action Francaise, the organ of an eponymous movement that was anti-democratic and pro-monarchy. The movement was born out of the Dreyfus Affair, an international controversy in which an innocent Jewish soldier was convicted in 1894 of passing secrets to the Germans, a crime for which he was later exonerated. The movement’s “founding prejudice” was that Dreyfus was in fact guilty and that those who supported him were undermining France, according to Frederick Brown’s The Embrace of Unreason: France, 1914-1940. Maurras spent years writing anti-Semitic articles. He referred to the French government, known as the Third Republic, as “the Jew State, the Masonic State, the immigrant State.”

In 1936, Maurras served eight months in prison for inciting the attempted assassination of Jewish politician Léon Blum and other French officials. According to Carmen Callil’s Bad Faith: A Forgotten History of Family, Fatherland and Vichy France, Maurras penned numerous articles calling for Blum to be lynched and shot in the back and have his throat slit.

Maurras blamed World War II on the Jews, faulting them for the German occupation of France. “The barbarous occupation of 1940 would not have taken place without the Jews of 1939, without their filthy war, the war they undertook and they declared: our occupiers were introduced by them, it was the Jews who launched us into catastrophe,” he wrote, according to 2001 article by Callil in the New Statesman. Callil also noted that Maurras’ newspaper supported the Nazis and “named names, hunted down enemies, and called for hostages, resistants, Jews and Gaullists to be shot.” In his political column during the war, Maurras wrote that “if the death penalty is not sufficient to put a stop to the Gaullists, members of their families should be seized as hostages and executed.”

At the end of the war, Maurras was sentenced to life in prison for complicity with the Nazis. He reportedly called his conviction “Dreyfus’ revenge.” Due to his failing health, he was released from prison shortly before his death in 1952.

According to Politico, Bannon approvingly cited Maurras’ distinction between what the French philosopher called the “real country” of the people and the “legal country” led by government officials. Maurras put Jews in the latter category, according to Brown, and referred to all Jews as foreigners.

Maurras is not the only racist or anti-democratic intellectual Bannon has gravitated toward. According to Politico, he has been in contact with Curtis Yarvin, a blogger who believes democracy is a failed form of government and whose ideas are influential to the white nationalist “alt-right” movement. The Huffington Post recently reported that Bannon is a big fan of a racist French novel, The Camp of the Saints, about immigrants invading Europe. The White House did not respond to a request for comment.

Bannon is one of Trump’s most influential advisers, and political observers see his hand behind some of the administration’s most controversial moves, including Trump’s ban on immigration from a handful of Muslim-majority countries and the White House’s inexplicable decision to not mention Jewish victims in a statement on International Holocaust Memorial Day. Maurras tried to bring down democracy and international institutions; today European leaders fear Bannon is aiming for the same.