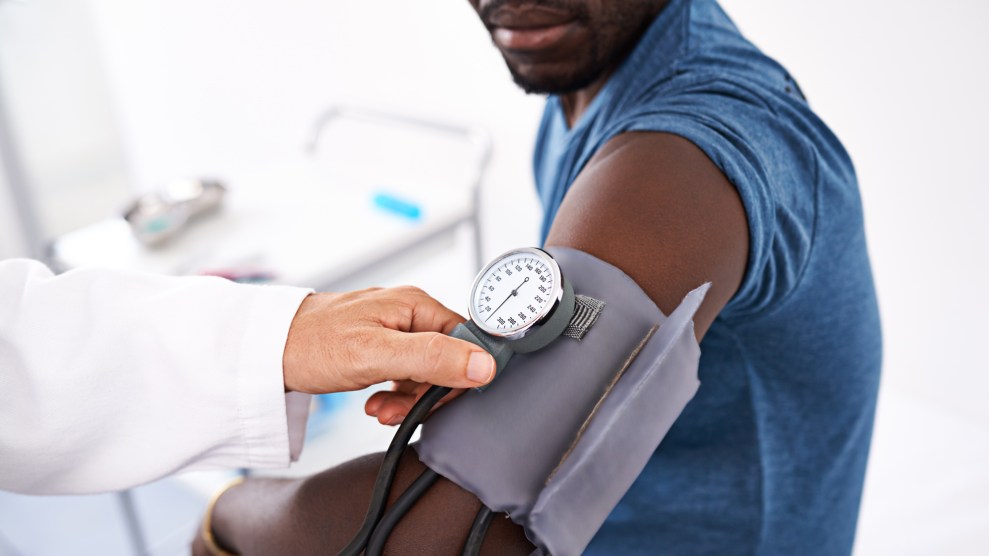 Terrance Moore couldn’t breathe—just a few steps left the 23-year-old struggling for air. His doctor in Washington, DC, had previously diagnosed him with bronchitis, but the problem persisted. When he returned for a follow-up appointment to ask about his shortness of breath, he was told to just keep taking penicillin. Something didn’t seem right, so Moore left the doctor’s office and headed straight to the ER.

There, a full two months after he started showing symptoms, he learned he was HIV positive—and that the virus had damaged his immune system so much that he had AIDS and pneumonia, an opportunistic infection. A new doctor put him on medication, but it made him sick. And when he complained, he was essentially told to suck it up. Nobody explained there were other drugs on the market that he might be able to tolerate, he says.

Internal bias isn’t just a problem with the police—it’s also an issue at hospitals.

That was in 2001. Moore, a black gay man, now understands the odds were stacked against him. According to estimates from the Centers for Disease Control and Prevention, about half of all black men who have sex with men will be diagnosed with HIV during their lifetime, compared with 1 in 11 white men who have sex with men. But black gay men are less likely to be aware of their HIV status: According to one study, they’re six times more likely to have an undiagnosed HIV infection and 60 percent less likely to receive treatment, which means their condition is more likely to deteriorate and they’re more likely to pass on the virus to other black men they date.

The problem isn’t riskier behavior, says Greg Millett, an epidemiologist who has worked on HIV policy for the White House and the Centers for Disease Control and Prevention. In fact, studies have shown that black gay men are more likely to use condoms than white gay men, and they tend to have fewer sexual partners. But they face certain barriers to health care. They’re less likely than their white counterparts to have a decent-paying job, health insurance, or stable housing, and they’re much more likely to experience discrimination at the doctor’s office.

Because internal bias isn’t just a problem with the police—it’s also an issue at hospitals. Several studies have shown that physicians don’t treat pain in black patients as aggressively as they do in white patients. A study last year at the University of Virginia found bias may be to blame, noting that many medical students and residents hold false beliefs about physical differences between blacks and whites—thinking, for instance, that black people literally have thicker skin. A 2016 study in China showed that doctors’ brains actually respond differently to patients in pain depending on the patient’s race.

Now 38 years old, Moore is pushing back against these prejudices. The Chicago native—who as a post-grad worked for the ACLU’s prison project and as a legislative aide to Sens. Chuck Schumer and Christopher Dodd—turned his professional sights to HIV policy a couple of years after his diagnosis, while he was still battling a triple cocktail of meds that left him weak. “It wasn’t until I was working at the National Alliance of State and Territorial AIDS Directors * that I realized having HIV didn’t mean I actually had to be sick—that the virus was controllable and that there is a whole world of better medications and care for me out there,” he explains.

Today, Moore serves as deputy executive director of NASTAD, a DC-based organization that represents health officials from every state who work on HIV and hepatitis. With about $2.4 million in funding from the Department of Health and Human Services, NASTAD last year launched an online training program called His Health that helps doctors “become more culturally humble and aware of black gay men,” Moore explains. The program includes free accredited courses that let health care providers brush up on their knowledge of HIV—a stunning 1 in 3 docs don’t know about preexposure prophylaxis, a drug that prevents HIV-negative people from acquiring the virus from their sexual partners.

And it also dives into the unique challenges that black gay patients face, including the racism and homophobia that might make them wary of heading to the doctor in the first place. In a survey of 544 black men who have sex with men, nearly half said they don’t trust medical establishments, while almost a third had experienced stigma from their health care providers over their race or sexual orientation. A related program, called Well Versed, teaches black men and providers how to push forward with uncomfortable conversations about sex and health. Sixty percent of black men who have sex with men have never discussed their sexuality with their doctor, according to one survey in New York, compared with 19 percent of white respondents.

In a survey of 544 black men who have sex with men, nearly half said they don’t trust medical establishments.

Though these programs are new, Moore hopes they’ll catch on. His organization is reaching out to medical schools and to groups like the HIV Medicine Association and the Association of Nurses in AIDS Care, which have about 4,500 health care practitioners in their networks. Meanwhile, he’s taking every chance he can to talk with young black men about their health. “I almost wish there had been someone to talk to my 20-year-old self,” he says, thinking back to his own HIV diagnosis. We’ve advanced since then—with better, simpler drugs, and preexposure prophylaxis. But while the number of new infections each year has dropped among white gay and bisexual men—the CDC noted an estimated 18 percent decrease from 2008 to 2014—it was pretty stable for black gay men during that period, after years of troubling increases.

While former President Barack Obama expressed sympathy for these problems—”We need to do more to show them that their lives matter,” he said of black gay men in 2011 on World AIDS Day—it’s not clear how much help they’ll get from the Trump administration. In his proposed budget, President Donald Trump suggested cutting a whopping $1.2 billion from the National Institutes of Health and $50 million from CDC HIV research programs, along with hundreds of millions in funding for global HIV and AIDS treatment.

“Unfortunately, progress remains uneven across communities and populations,” Dr. Eugene McCray, director of the CDC’s division of HIV prevention, stated in a recent press release. While black gay men are far more likely to acquire the virus, they’re still much less likely to receive therapy for it. “There’s still a lot of stigma,” Moore says. “We still have a lot of work to do.”

This sentence has been revised to accurately state NASTAD’s full name.