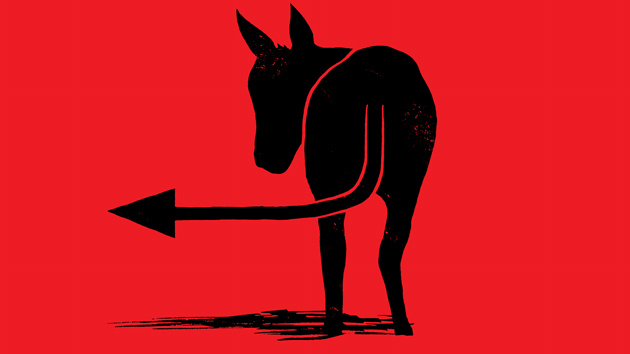 A month after President Donald Trump took office, khalid kamau was eating lunch in the cluttered kitchen of the Mayday Space, a leftist community center in Brooklyn. A year earlier, the 39-year-old (who prefers to spell his name without capital letters) had been driving a bus in Atlanta. Then his life took a hard left turn. When the city slashed public pensions, he became a union organizer. He then launched a Black Lives Matter chapter, became a delegate for Sen. Bernie Sanders, and led a walkout at the Democratic National Convention when Hillary Clinton clinched the nomination. In December, kamau announced his candidacy for City Council in South Fulton, Georgia. Not long after that, he joined the Democratic Socialists of America.

kamau, who was wearing a black T-shirt that said, “Don’t let your new president get your ass whooped,” had been a DSA member for all of a few weeks, but he already had big plans. Leaning forward on his wooden stool, he said, “I want to be the Obama of democratic socialism.”

First, kamau needed to win an election. Which is why, on an unseasonably warm weekend in February, he had come to Brooklyn for the Revolution at the Crossroads conference, a gathering of about 300 teen and twentysomething leftists that was sponsored by the Young Democratic Socialists, a subgroup of the DSA. After speaking on the kickoff panel the night before, kamau had taught the attendees how to use the free canvassing app MiniVAN and signed up dozens of volunteers for his campaign. (His organizing paid off; last Tuesday, kamau won his runoff election with 67 percent of the vote.)

You could fit just about every DSA member inside Madison Square Garden, but being a socialist hasn’t been this cool in years.

Founded in 1982, the DSA claims to be the largest socialist organization in the country. It’s not a political party along the lines of the Communist Party USA or the Green Party. Many of its members are Democrats or the kind of left-­leaning independents who usually vote for Democrats. But just as the Obama era ushered in a boomlet of libertarianism on the right, the DSA is banking on Trump to make socialism great again. Its goal is not just to stop Trump’s worst policies, but to push the political conversation on the left even further to the left through a mix of political action and cultural engagement. There are signs it’s already working.

Fueled by disenchantment with the traditional institutions of the Democratic Party, the promise of Sanders’ candidacy, and the specter of Trumpism, DSA membership has more than doubled since the election. The DSA now boasts more than 20,000 members and more than 120 local chapters. Sure, you could fit just about everyone comfortably inside Madison Square Garden, but being a socialist hasn’t been this cool in years.

“The Bernie campaign really opened that Overton Window,” said Winnie Wong, a 41-year-old activist who co-founded the group People for Bernie and coined the phrase “Feel the Bern.” “We funneled thousands of people, hundreds of thousands—15 million people!—through to the other side. Are those people democratic socialists? No. Do they feel comfortable with the idea of socialism? Well, yeah! Because they voted for it.” Normalizing socialism, she said, is “the most important thing we can do.”

MAD LIBS: A quick guide to channeling your anti-Trump fervor 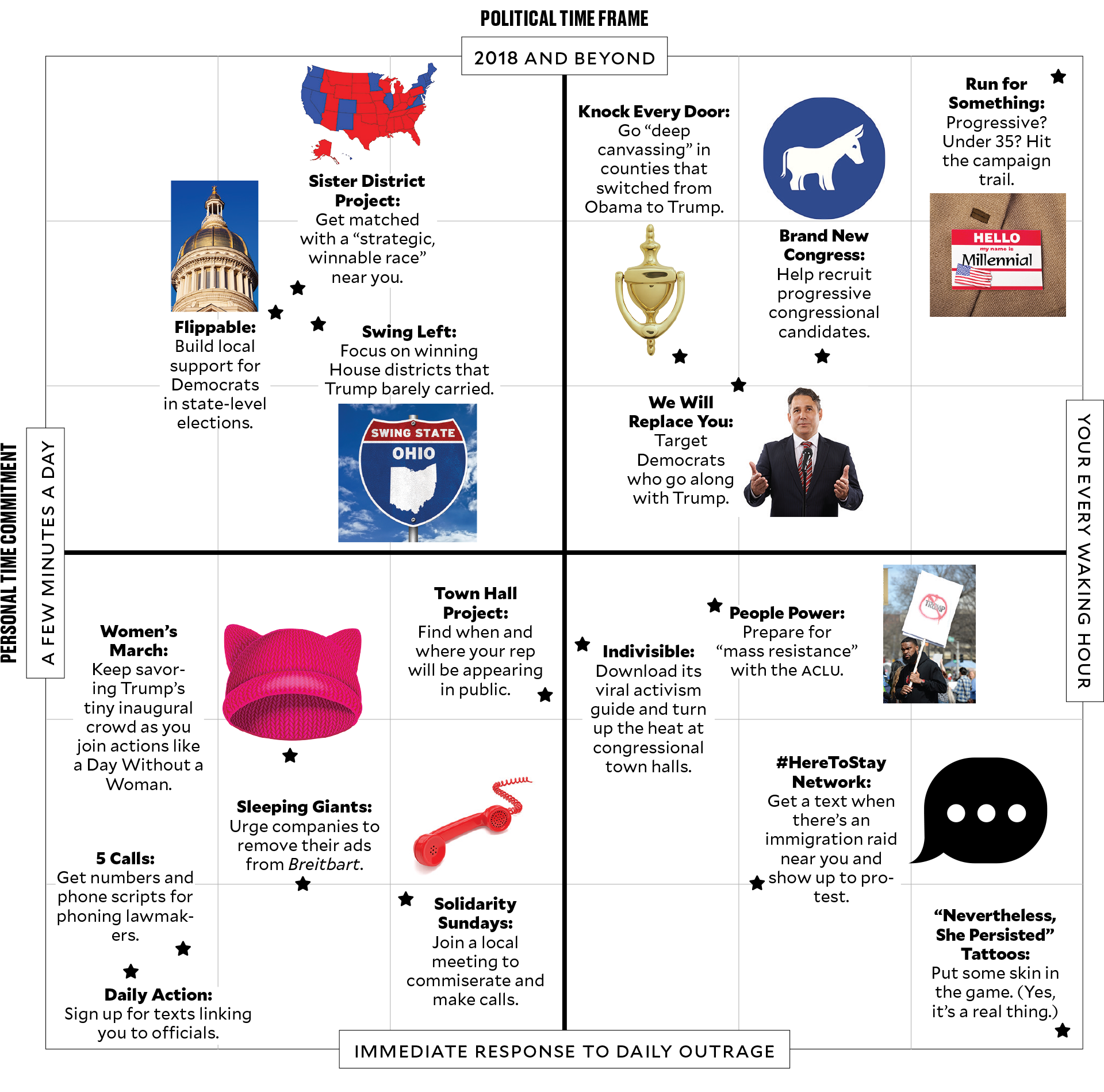 Revolution at the Crossroads existed in a parallel universe to other political confabs, such as the Conservative Political Action Conference, known for its corporate sponsors, bad suits, and ritzy Beltway hotels. The opening panel was delayed because the speaker system was picking up an AM radio station. An attendee joked that “neoliberal capitalism”—”neoliberal” being the epithet of choice among the DSA set—was to blame. Sleeping bags littered the side walls. The dress code was plaid.

Socialism’s hipster makeover has been accelerated by a flowering of leftist media and culture. The DSA’s unofficial hype man is not Sanders—who is not a member—but the comedian Rob Delaney, who joined up after the election, inspired by his positive experiences with the British National Health Service as an expat living in England. Delaney has tweeted about the DSA more than 100 times since November and describes himself as a “fucking cockroach” for socialism, because of his persistence. “A lot of people have written me and said that they’ve joined because I won’t shut up about Democratic Socialists on Twitter,” he told me. He even raised money to defray expenses for some of the students who traveled to Brooklyn.

A popular gateway drug for democratic socialists is Chapo Trap House, a podcast hosted by a small clique of millennial Sandernistas that takes its deliberately head-scratching name from the jailed Mexican cartel king. It is incisive and irreverent but often scathing toward politicians, journalists, or anyone else insufficiently in line with its politics. (For instance: Clinton is an “entitled fucking slob,” and Democratic leaders should have “fucking killed themselves” after losing the election.)

Outside the conference, activists hawked Workers Vanguard, the ubiquitous Trotskyist newspaper. But inside, students chatted with writers from the two-year-old journal Current Affairs (“the world’s first readable political publication”) and Jacobin, a quarterly launched in 2010 by Bhaskar Sunkara, then an undergrad at George Washington University. Jacobin aims to do for socialism what National Review did for conservatism half a century ago. It’s polemical but not stodgy; its writers are as likely to discourse on the NBA as they are to inveigh against Uber. The magazine’s audience doubled, to 30,000 subscribers, in the four months after the election.

“There’s a feeling that with the center kind of defeated, or at the very least temporarily discredited, we are the new center-left.”

At the conference, where he was selling the most recent issue from a folding table along the wall, Sunkara, also a vice chair of the DSA, was a minor celebrity. “I think there’s a feeling that with the center kind of defeated, or at the very least temporarily discredited, we are the new center-left,” he told me. That newfound popularity has caused him to rethink the limitations of leftist politics. “Compared to where the goalposts were five years ago, we’re already basically there,” he said. Socialists won’t run Washington by 2020—but maybe they will in his lifetime.

But the DSA’s continued growth is hardly guaranteed. One challenge as it seeks to broaden its appeal is messaging. Members of the new socialist vanguard pride themselves on a certain degree of unfiltered vulgarity, and they target mainline liberals as often as they do Trump-backing conservatives. Amber A’Lee Frost, a Chapo co-host and YDS panelist, has referred to her cohort’s style as the “Dirtbag Left.” Frost contends that rudeness is essential to disrupting the political status quo. It is, however, a weird way to make new friends. Coalition politics are hard when everyone else is a sellout.

More pressing than its inability to play nice is the movement’s inescapable whiteness. If the audience at the conference was any indication, the DSA’s future is doomed to demographic failure—a point kamau emphasized on the event’s opening night. “I want you to look around the room,” he said, “and then I want you to realize that we’re in Flatbush, Brooklyn, right?” It was Bushwick, but the point stood. “I love Bernie, but I also think that the leaders of the Democratic Party and the leaders of the left are going to have to come to terms with the fact that the American left is a movement of black and brown people,” he told me. “And the leadership of the Democratic Party doesn’t look like that—the leadership of the DSA doesn’t look like that.”

In South Fulton, a mostly working-class, African American community of 100,000 people, kamau sees an opportunity to broaden the appeal of democratic socialism. He believed his race, which was nonpartisan, was a chance to act on a DSA manifesto that calls for running “openly democratic socialist candidates for local office, in and outside the Democratic Party,” and “taking out pro-corporate, neoliberal Democrats.” YDS had given each conferencegoer a three-page reading list with titles by writers such as Karl Marx, Antonio Gramsci, and Barbara Ehrenreich. Wong suggested that young socialists study up on the hard lessons of electoral politics instead. “Learn about the mechanics it takes to win these elections,” she said. “You’re not gonna learn those by reading all three volumes of Capital, I promise you.”