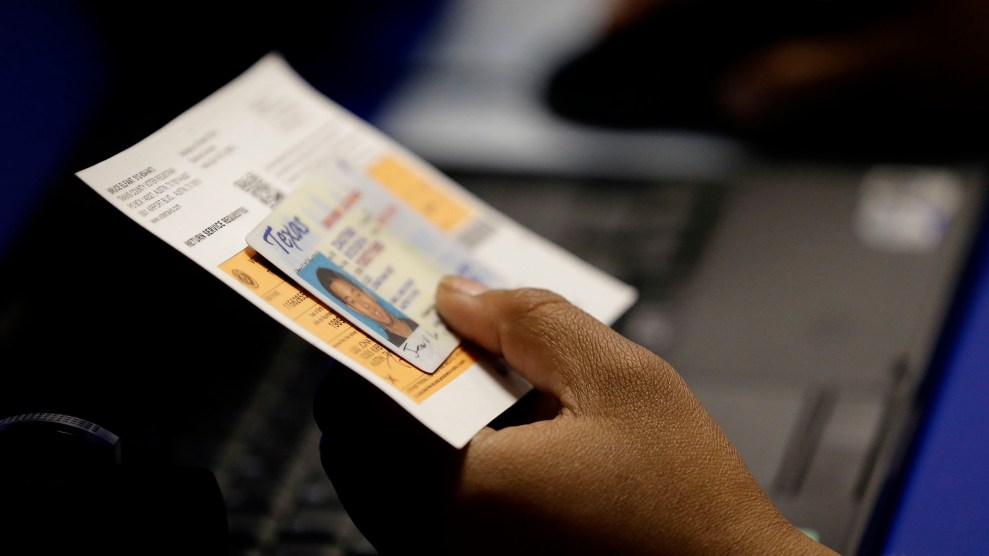 A federal judge Monday ruled that the state of Texas intentionally discriminated against African American and Hispanic voters when it enacted a draconian voter ID law in 2011. The ruling could pave the way for courts to require Texas to get approval from federal authorities before making future changes to its voting laws.

Critics of the photo ID law pointed to the fact that Texas lawmakers allowed voters to use concealed gun permits, which are more likely to be held by white voters. But the law disallowed identification cards issued to state employees and public university students, which are more likely to be used by minorities. In her opinion, Ramos pointed out that Republican lawmakers refused to include more forms of acceptable ID, reduce the cost of acquiring an ID, adopt a more lenient policy toward expired documents, or approve voter education about the new requirements. “[T]hese efforts revealed a pattern of conduct unexplainable on nonracial grounds, to suppress minority voting,” Ramos wrote in her opinion.

In 2013, the Department of Justice joined civil rights groups, Democratic lawmakers, and voters in challenging the law. On the day President Donald Trump was inaugurated, the department signaled that it might change its position. In February, the department’s lawyers asked the court to allow the US government to withdraw from the case and urged. The DOJ also urged Ramos not to rule on the intent question until the Texas legislature had taken steps this spring to amend the law, which the Fifth Circuit had ordered it to do. Ramos allowed the federal government to withdraw from this part of the case but rejected its request to hold off on the intent ruling. However, Ramos did indicate that she would wait until the legislature recessed to issue any remedy in conjunction with her findings.

The intent finding is a major victory for voting rights advocates because the courts have wide latitude to remedy intentional racial discrimination. Most importantly, a finding of intent allows the courts, if they choose, to put jurisdictions under federal oversight so that future changes to election procedures must be approved by the DOJ. Civil rights groups are requesting such a remedy and feel their argument for putting Texas back under federal supervision—which ended when the Supreme Court gutted a central provision of the Voting Rights Act in 2013—is strong. Last month, a three-judge panel in a federal district court in San Antonio found, in a separate case, that Republicans had racially gerrymandered congressional districts in order to weaken the growing power of minority voters. Taken together, voting rights attorneys believe the two findings of racially discriminatory intent make a convincing case that Texas should be placed under federal supervision.

“This is a great win for Texas voters, but it shouldn’t surprise anyone who looked seriously at the evidence,” Myrna Pérez, deputy director of the Democracy Program at the Brennan Center said in a statement after Ramos’ ruling. “Texas legislators crafted a law they knew would hurt minority voters, without any good justification or attempt to ameliorate the harms, and they mangled the legislative process to get it through.”