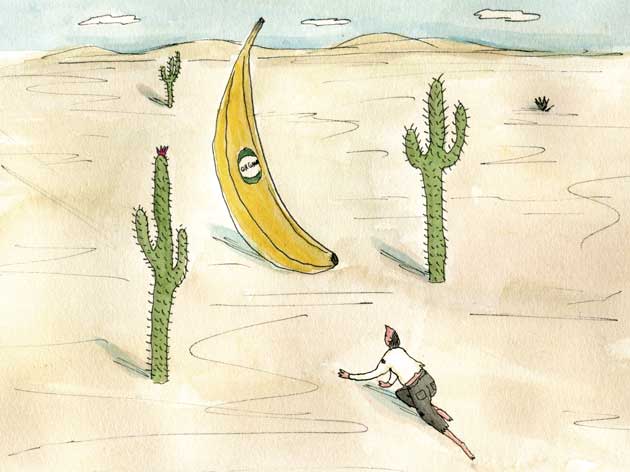 Deborah Gilfillan lives between Brooklyn’s first Trader Joe’s and its flagship Whole Foods. She’s also walking distance from Union Market, a local grocery chain where flank steak sells for $15.99 per pound. But these stores are too expensive and don’t have the right ingredients for the 62-year-old contract administrator, a native Brooklynite who lives in a brownstone she bought for a song back in the 1960s. Nowadays, she usually walks or takes the bus almost a mile to shop.

In the past, if a city dweller had to journey a mile to a grocery store, it probably meant she lived in a “food desert.” The term was coined by social scientists in the 1990s to describe places bereft of ingredients needed to make a healthy meal.

In cities across America, specialty stores flock to newly hip districts while cheap supermarkets are pushed out.

In recent years, the US government has spent at least $169 million in grants and helped raise $1 billion more to try to end food deserts, by funding things like new stores and farmers markets. But as urban neighborhoods gentrify, a new kind of disparity has emerged. Many experts, including some federal researchers, stress that high local grocery prices—not simply distance—prevent lower-income households from eating well. Gilfillan finds herself not in a food desert, but rather in what some soci­ologists are now calling a food mirage. Her home is surrounded by fancy markets and restaurants, yet cheap staples are hard to come by. “You can go in there and buy 10 different lettuces,” she says. But “we grew up on pork. A lot of them don’t have it.”

In cities across America, specialty stores flock to newly hip districts while cheap supermarkets are pushed out. Since 2000, the median sale price for a home in Gilfillan’s neighborhood of Boerum Hill has increased nearly fivefold, from $250,000 in January 2000 to $1.15 million in the fall of 2016, pulling up commercial real estate with it. Met Foods, the grocery store she used to frequent, was sold in 2014 as the land under it became valuable.

The conventional approach to addressing food access is blind to these mirages. In 2010, the White House announced the Healthy Food Financing Initiative, which provides loans, grants, and tax breaks to food sellers mostly in neighborhoods that qualify as food deserts. To help identify needy areas, the government looks at whether the median income of a census tract is less than 81 percent of the median income of the greater area. But this metric doesn’t work well in gentrifying neighborhoods, where rich and poor people live crammed together.

Take Boise, an up-and-coming district in Portland, Oregon. In 2014, 15 percent of its residents lived below the federal poverty line of $11,670 for individuals or $23,850 for a family of four. But thanks to upscale stores like New Seasons (a West Coast chain similar to Whole Foods) and the district’s high median family income, it’s hard to call Boise a true food desert, even though people there have few options besides pricey retailers and corner stores stuffed with junk food. While “conventionally defined food deserts are rare in Portland,” a pair of researchers concluded in a 2013 paper, “food mirages, by contrast, cover much of the city.”

While “conventionally defined food deserts are rare in Portland, food mirages, by contrast, cover much of the city.”

The Department of Agriculture doesn’t seem sure what to tell people living in food mirages. Even benefits through the Supplemental Nutrition Assistance Program (formerly called food stamps) aren’t a great solution: They’re based on nationwide average costs, so they don’t go as far in places where specialty and niche food stores dominate the market and charge upward of $4 a gallon for milk. When I asked a SNAP spokeswoman about the problem of ignoring local food prices, she referred me to a webpage called “Healthy Eating on a Budget.” “Create a grocery game plan,” it suggests. “Rethink your food choices and pick healthier options.”

Gilfillan has a grocery game plan. She treks to Stop & Shop, a chain supermarket where she finds plenty of bargains. On her way home, she passes modern condos and farm-to-table restaurants. Although she can’t bring herself to move out of her house, her advice for her son, Dashawn, is different. “Sell it for whatever you can get,” she recalls telling him. “So long as you got the memories, you don’t need this damn house.”