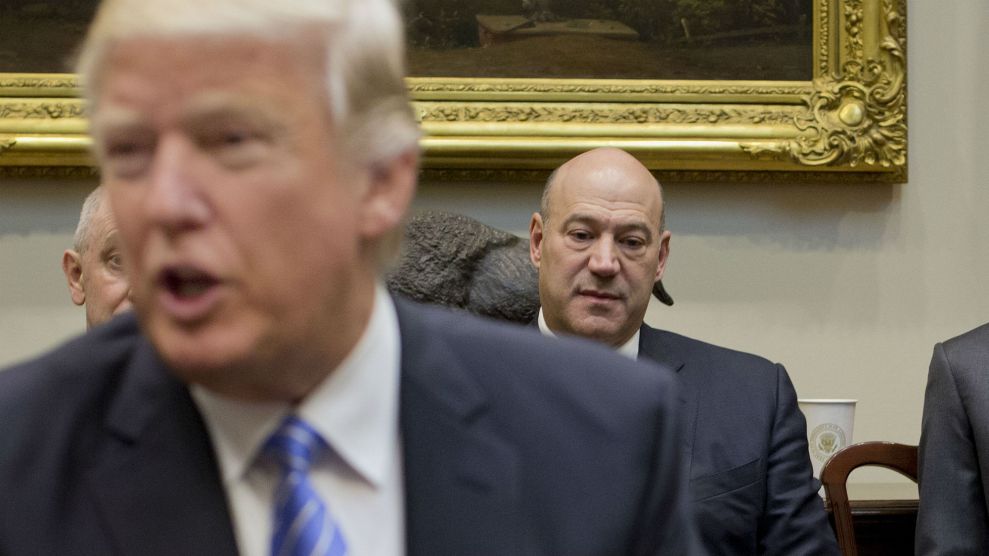 During the presidential campaign, Donald Trump the tycoon railed against big banks, claimed he cared passionately about the little guy, and vowed to make the economy work for struggling middle-class Americans. But after winning, he placed the American economy in the hands of Gary Cohn, the chief operating officer and president of Goldman Sachs. In January, Trump named Cohn chairman of the National Economic Council, the president’s top financial and economic whizzes. Cohn would be the highest authority on the economy within the White House. He quit his Goldman Sachs gig, but he left with an estimated $285 million severance package and agreed to sell a $16 million-stake in the Industrial and Commercial Bank of China.

Cohn certainly lives in a different economic reality than most Americans, and thanks to financial disclosure forms released on Friday night by the White House—which cover 180 of its officials and staffers and detail their finances when they arrived at the White House—the public can see just how different.

In 2015 and 2016, according to the form for Cohn, he earned between $39 million and $45 million from Goldman Sachs. This includes salary ($1.8 million last year), annual $5.4 million cash bonuses, and tens of millions of dollars in stock options, dividends, and interest. This doesn’t count what he brought in via various Goldman Sachs-operated retirement accounts. Nor does it take into account the money he pocketed from his sprawling brokerage accounts, which included Goldman Sachs investment funds. Cohn also had millions invested in hedge funds, real estate properties around the country, and numerous companies, including that Chinese bank, a high-end cosmetic retailer, and multiple medical technology firms. All told, it appears Cohn earned as much as $75 million last year.

Cohn is not the only Goldman alum to join the Trump administration. Steve Mnuchin, Trump’s Treasury secretary, worked at Goldman for years, and last month Trump hired another former Goldman Sachs top executive to be Mnuchin’s No. 2 at Treasury. The bank has been wildly successful over the last two decades, but it also has become a symbol of Wall Street’s excesses. It played a key role in the 2008 financial crash that led to a nationwide economic meltdown. During the campaign, Hillary Clinton was slammed repeatedly—by both her Democratic challenger Bernie Sanders and Trump—for giving paid speeches to Goldman executives. And before he wrapped up the GOP nomination, Trump attacked Republican rival Ted Cruz, pointing out that Cruz’s wife worked at Goldman Sachs and that he had received a loan from the firm.

Cruz says I supported TARP, which gave $25 million to Goldman Sachs, the bank which loaned him the money he didn’t disclose. Puppet!

Cohn’s full financial disclosure can be found below.