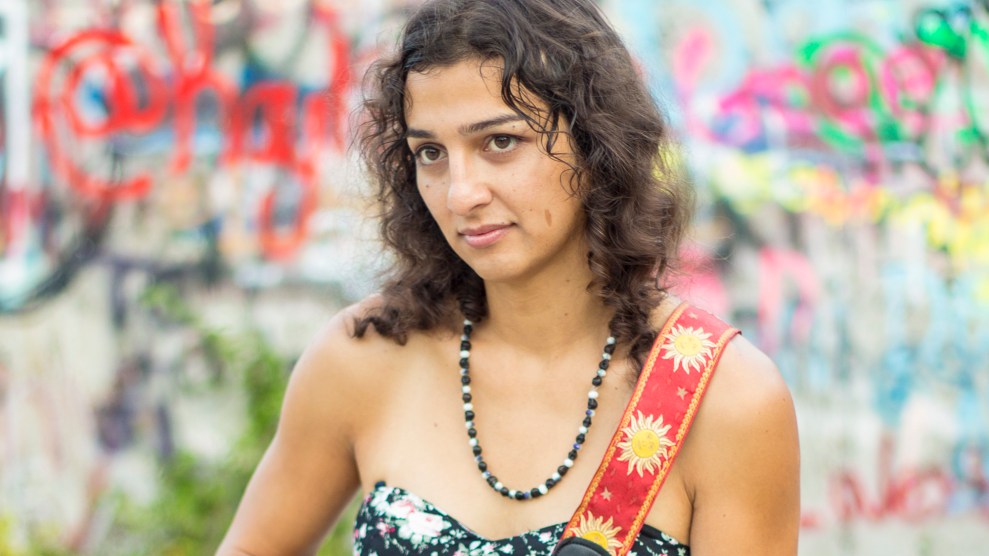 Lara Americo is a musician and activist in Charlotte, North Carolina.Courtesy of Lara Americo

Lara Americo has lived in North Carolina most of her life. The 32-year-old activist, artist, and musician was in Charlotte last year when state lawmakers passed one of the country’s most sweeping anti-LGBT laws, House Bill 2, which banned her from the women’s bathroom because she’s transgender. She was still there late last month, when they replaced that law with another one to appease critics who called it discriminatory. The new law was framed by the governor as a repeal, or a compromise, since it does not explicitly require trans women like Americo to use the men’s room. But LGBT activists have called it HB2.0 because it prevents cities like Charlotte from passing nondiscrimination ordinances that would guarantee her access to the women’s room. This week, Americo reached out to say that while the NCAA and others seem to believe the situation has improved for transgender people, she’s never been more scared to live in the Tar Heel State.

I used to tell everyone I wasn’t going to make it past 30 because I was convinced that I wasn’t. I was suicidal and pretty much a hermit—everything was wrong but I didn’t know why. Then I realized it was because I wasn’t living as a woman, so at 29 I decided to transition. I started to go out and meet people, and I learned that North Carolina isn’t really friendly toward transgender people. People just get quiet around you, they whisper. And my family was in shock. They tried to be supportive, but I don’t think they could cope with missing the son they had loved and raised—we haven’t really talked much since.

I was still sort of in the closet until last year, when Charlotte’s City Council started talking about a nondiscrimination ordinance that would allow trans people to use their preferred bathrooms. I testified in support of it—that was when I began to be public about being trans. When it passed, it felt like we were finally going in the right direction. But then North Carolina lawmakers started considering HB2 [which blocked Charlotte’s ordinance]. I testified at the Senate, begging them not to, but they did. I kept using the women’s bathroom anyway—it was a protest against the law every time. Also, if I were to go into the men’s bathroom, there was the potential of outing myself as a transgender woman. While I don’t really keep it a secret anymore, I don’t make it so obvious in public because it can be dangerous for me, especially in the climate we’re in now.

“All we have is a spotlight on us, so that people who don’t like us can target us.”

After HB2 passed, it got scarier. Anytime I have to drive in North Carolina, there are 50-mile stretches without a city, just back roads and small towns, and I can’t stop the car because if I do, I’ll have to worry about someone noticing me. Transgender people, especially people of color, face high rates of violence, so I’ve had to be mindful of my presentation, making sure my clothes are right and my mannerisms are perfect and my voice doesn’t drop too low. And I have to worry about the police pulling me over, discriminating against me. Because while there was always a risk, now they’re emboldened.

A majority of people who don’t really follow the issues that closely, they think there’s been a repeal. But I don’t think it was a repeal—I think transgender people are in even more danger now. When you don’t allow cities to give people protections, you put people in danger. Our state government made it clear that they put profit and sports ahead of our safety, and that mentality trickles down. We still don’t have the protections we need—all we have is a spotlight on us, so that people who don’t like us can target us. I feel less safe now than I did a few weeks ago, and so do a lot of people. I work with the Trans Lifeline, a suicide hotline, and after the new replacement law passed, there was a spike in callers.

“I love North Carolina and I don’t want to leave. And I would hate it if I gave in to fear tactics and discrimination.”

I don’t like to show that these laws have affected me, but they do: I don’t want to stop at a gas station when I’m running out of gas. I don’t want to join the YMCA or the swim team because I worry about someone seeing my body. My partner worries—when I leave the house, I can usually count on her texting me within an hour, and if I don’t respond she gets really upset. I’ve had instances where I’m in a bar and I try to use the bathroom, and someone will look at me funny, and I’ll have to leave the bar to avoid a confrontation. Recently they proposed a bill that would increase trespassing punishments for people in the bathroom, and that bill could be used to target transgender people. I try to be optimistic, but our state has a Republican super-majority with extreme beliefs, so I do worry it’s going to pass and that transgender people will be criminalized.

Every few weeks I hear about a person who is making plans to leave the state, and I’ve considered it myself, but I have to wrestle with the thought of being forced out of my home, because I love North Carolina and I don’t want to leave. It’s a beautiful state. And I would hate it if I gave in to fear tactics and discrimination. There are many people here who don’t care that I’m transgender and they don’t care who uses the bathroom with them. It’s those people who make me want to stay here and be a part of this and fight for the transgender kids who live here and are going to public schools and worry about all these things, and make sure they don’t have to deal with this when they’re 30.