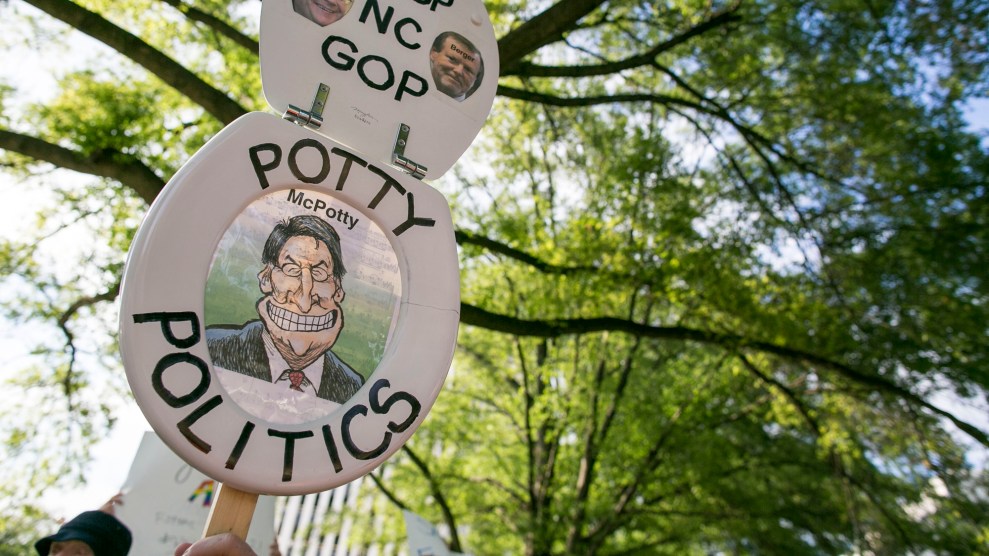 A protest sign at a demonstration against House Bill 2 in Raleigh, North Carolina, in May 2016Al Drago/AP

Republican lawmakers in North Carolina have filed a bill that could make it more difficult for transgender people to use the bathroom by imposing stiff penalties on anyone convicted of “trespassing” in a restroom.

House Bill 562, co-sponsored by state Rep. Brenden Jones, was filed on Tuesday, shortly after the NCAA announced that it was lifting its boycott of North Carolina because the state’s Legislature partially repealed a law that had required people to use bathrooms consistent with the sex they were assigned at birth.

The text of the new bill does not mention transgender people or even refer to a person’s sex. Instead, it states that entering or remaining in a bathroom “without authorization” after being asked to leave by the owner of the facility, a manager, or anyone else in the room will be considered trespassing. “My bill will do two things,” Jones wrote in a Facebook post last Thursday. “First, it will specifically state it is a second degree trespass for entering the restroom or changing room of the opposite sex; secondly, it would enhance the punishment from what is now, a class 3 misdemeanor punishable up to only 10 days, to a class 1 misdemeanor, punishable up to 120 days in jail.” Jones did not respond to a request for comment.

Requiring “authorization” to be in a bathroom could be particularly harmful for transgender people, says Cathryn Oakley of Human Rights Campaign, a gay and transgender rights advocacy group. By Oakley’s reading of the bill, a trans male college student could be prosecuted for trespass if he uses the men’s room on his campus after being asked to leave by another student in the room.

Last week, the state Legislature replaced House Bill 2, the so-called bathroom bill, with a new law that LGBT groups have described as “HB2.0” because it opens the door for these types of restrictive regulations. The replacement law prevents cities, schools, and localities from passing nondiscrimination ordinances for trans people in bathrooms, preventing any local guarantees that trans people can use facilities consistent with their gender identity. “There’s no backstop to prevent further anti-LGBTQ legislation from being introduced, debated, and potentially passed,” Oakley says. “The North Carolina General Assembly is not going to stop going after transgender people.”

The latest bill, says Democratic Rep. Deb Butler, appears to be a direct response to the recent replacement of the original bathroom bill. “A faction of the Republican Party here in North Carolina is angry that HB2 was repealed,” she says. “They wanted it, they liked it just the way it was. This is, I am sure, their attempt to thumb their nose at the compromise.” Butler says the new bill will likely be introduced to the Legislature on Wednesday and assigned to a committee. “The lunacy persists.” A companion bill has been filed in the state Senate.

Jones voted in favor of the HB2 replacement last week. Jones wrote on Facebook after the vote that “our children will not be forced to share bathrooms with those of the opposite sex…I will never waiver on this vital issue of privacy.” Police officers and other experts note that there is no evidence that sexual predators are taking advantage of legal protections for transgender people in public restrooms.

Update, 10:30 p.m.: Gov. Roy Cooper has come out against the trespassing bill. “The Governor is not supportive of efforts such as these as he believes we ought to be working to expand statewide protections for LGBT North Carolinians,” Ford Porter, a spokesman for Cooper, said in a statement.