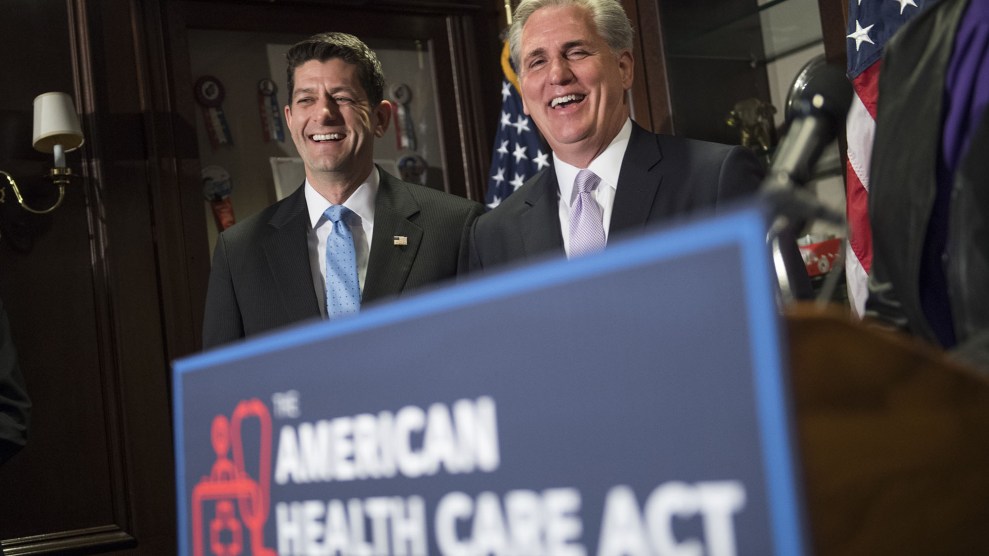 Republicans are still struggling to cobble together a plan to repeal Obamacare. Their latest proposals tacks hard to the right and would wipe away the core consumer protections in the Affordable Care Act—including a de facto end of the laws’ protections for people with preexisting medical conditions.

House conservatives, who helped sink last month’s GOP health care bill, are celebrating the new plan. The right-wing Freedom Caucus announced its support Wednesday. But it could quickly go down in flames if moderates in the House balk at ending some of the most popular elements of Obamacare. And even if it does clear the House, it could be a nonstarter for Republicans in the Senate.

The proposal, written by Rep. Tom MacArthur (R-N.J.) and obtained by Politico, would allow states to opt out of two central elements of Obamacare: the provisions know as essential benefits and community rating. The first part of that—essential benefits—is pretty simple. Before Obamacare’s passage, purchasing insurance on the individual market could be extremely difficult; someone might buy a health plan only to later realize it didn’t cover basics, such as in-patient care or emergency room visits. Obamacare fixed that problem by requiring insurers to cover a range of basic services.

70% say insurers shouldn’t be able to charge more for people with preexisting conditions.

Driving sick people out of their insurance policies isn’t an unintended consequence of MacArthur’s proposal; it’s the goal. That’s because it would likely lower the cost of premiums for everyone else. Insurance companies would be able to charge less since they wouldn’t actually be paying for as much care anymore. But it would almost certainly result in a spike in the number of uninsured people, too. When the Congressional Budget Office looked at the GOP’s plan last month—when the bill still offered essential benefits and protected preexisting conditions—it found that 24 million fewer people would have health insurance under the proposal. That number would probably be even higher under the new plan.

If House leadership adopts MacArthur’s amendment, it will directly contradict what Republicans have promised all year long as they’ve debated their plan to replace Obamacare. When the initial bill was introduced last month, Speaker Paul Ryan (R-Wisc.) said that it protected “patients with pre-existing conditions.” Rep. Greg Walden (R-Ore.), who chairs one of the committees in charge of health care and helped craft last month’s bill, told Politico recently that ending those consumer protections would be “a red line I will not cross.” And when Trump gave a speech before Congress in late-February, he said, “We should ensure that Americans with preexisting conditions have access to coverage.”

If all those Republicans abandon their promises, they won’t have the backing of the public. An ABC News/Washington Post poll released this week showed that 70 percent of Americans think insurers in all states should be required to offer coverage to people with preexisting conditions at the same price as everyone else. Just 26 percent said states should be able to opt out of those regulations.