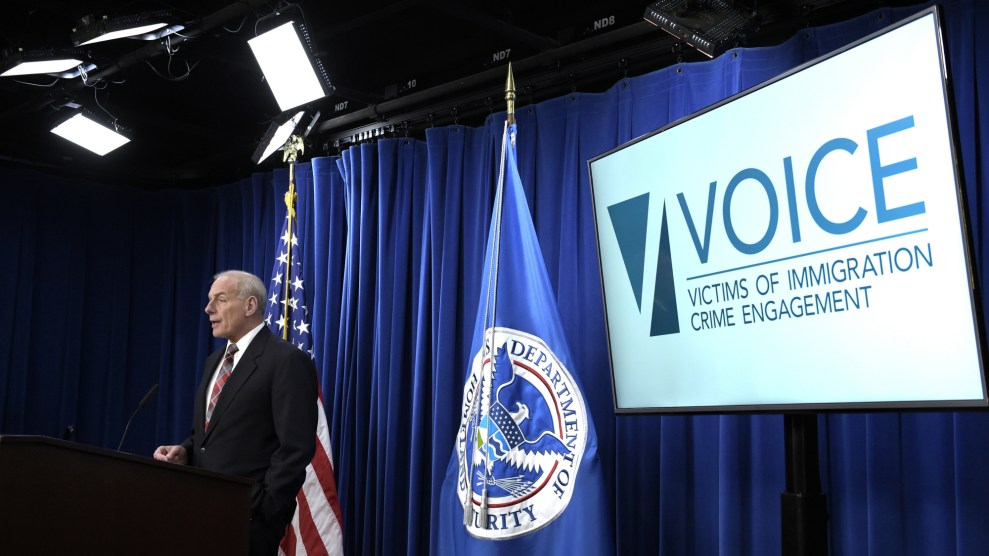 The Trump administration officially launched an office on Wednesday dedicated to the victims of crimes committed by undocumented immigrants—an effort that immigrant advocates say does not align with actual crime data and appears designed to demonize immigrants.

The Department of Homeland Security announced the creation of the Victims of Immigration Crime Engagement (VOICE) office, which will provide aid to people affected by crimes committed by undocumented immigrants. According to DHS and officials with US Immigration and Customs Enforcement—which will house the office—this assistance will include a hotline to answer questions about the immigration enforcement process and a notification system to provide updates to registered victims about the custody status of immigrant perpetrators.

The services provide by VOICE are not new: Most are already offered by ICE’s community engagement office, and the office draws upon personnel and resources that the agency already has. But administration officials have shifted the tone of the conversation by focusing on victims of crimes committed by immigrants.

“All crime is terrible, but these victims are unique—and too often ignored,” Homeland Security Secretary John Kelly said during the Wednesday launch event in Washington. “They are casualties of crimes that should never have taken place, because the people who victimized them oftentimes should not have been in the country in the first place.”

In reports and statements leading up to the launch, VOICE has been described as focusing exclusively on people affected by crimes committed by undocumented immigrants. But DHS officials on Wednesday said that the office would provide services to victims of “crimes with an immigration nexus,” suggesting that the scope of the agency could expand beyond the undocumented. DHS officials told reporters that VOICE will focus on crimes committed by anyone who could potentially face deportation, a grouping that could include immigrants with legal status.

“The goal of this program is to instill fear of non-white immigrants,” one group alleged.

The office has been in the works for several months and was developed with input from victims and their families, many of whom attended the launch event. It was first mentioned in the president’s January executive order addressing illegal immigration, and its purpose was further clarified in a memo published by Kelly in February. President Donald Trump first spoke publicly about it in his February address to Congress, when he said, “We are providing a voice to those who have been ignored by our media and silenced by special interests.”

The launch drew immediate criticism from immigration advocates. “The goal of this program is to instill fear of non-white immigrants,” the National Day Laborer Organizing Network said in a statement. “It is another deliberate step taken by the Trump administration towards creating institutions that legitimize racist propaganda. That’s what this is about, instilling fear in order to subject people to double suspicion, double punishment, and deprivation of due process.” Others have argued that while the administration focuses on crimes committed by immigrants, it has pulled back from assisting immigrant crime victims, leaving many immigrants fearful of reporting crimes to police.

“I think it is absurd to highlight the crimes committed by a small group of people without reporting on the crimes committed by everybody,” Alex Nowrasteh, an immigration policy analyst with the Cato Institute, a libertarian think tank, said in an interview before the Wednesday launch. With the establishment of VOICE, he added, the administration appears to be “trying to show how dangerous a group of people is when they have no statistical evidence towards that claim.” Crime data suggests that immigrants are less likely to commit crimes than native-born citizens.

At Wednesday’s event, DHS officials argued that VOICE is not about demonizing immigrants, but instead will focus on assisting victims and families who are confused about how immigration enforcement works. “The immigration system is so complicated, there wasn’t anyone there to tell [victims] what has been happening on the immigration side,” said DHS spokesman David Lapan. “This office can help victims’ families understand the immigration elements of the crimes committed.”

But that mission has been complicated by the president’s rhetoric on immigration and the undocumented. Trump has frequently highlighted the immigration records of violent offenders. One of his central campaign promises was to build a wall between Mexico and the United States, and he has pledged to ramp up deportations.

Launching just days before Trump’s 100th day in office, VOICE comes at a difficult moment for the administration. On Tuesday, a federal judge blocked part of the president’s order that would have withheld funding from so-called sanctuary cities, which refuse to comply with Trump’s call to detain and deport undocumented immigrants.