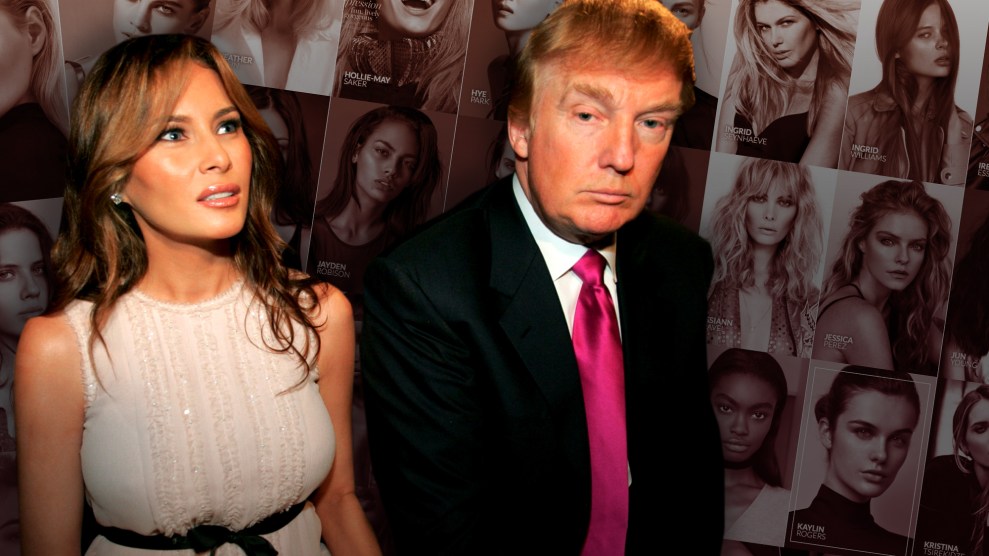 Donald Trump’s presidency hasn’t been good for one of his favorite businesses. The president’s modeling agency has been losing models and senior staff in recent months amid a growing backlash over his toxic politics. And the problems at Trump Model Management appear to be escalating. In interviews with Mother Jones, three industry insiders said they believe the agency could be forced to close.

The sources—two model bookers who have worked with Trump Models and another person with deep ties to the agency—attributed the firm’s sudden tailspin to the controversial president himself. The once glamorous Trump brand, they said, now appears to be tainted.

“Yeah, it’s closing,” said Virginie Deren, a model booker at the top Paris firm Premium, which co-represents a handful of models with Trump Model Management. Deren said she was given this information by a Trump booker. “It’s surprising that it’s come to that point,” she added. “It’s rough.”

Trump executives didn’t respond to multiple requests for comment for this story, but employees of the agency said this week that business is continuing as normal.

“We’ve met quite a few [Trump Models staff] who’ve expressed the dismay this is happening, and their only goal is to find a new place,” said one agent at another firm.

Deren said she didn’t know the precise timing of the potential closure or what might happen next for models at the agency. “For now, they haven’t really told us anything,” she said. “Of course, it’s going to take time.”

“That’s definitely happening,” said a second modeling agent who has also worked with Trump models, when asked about the potential closure. This source added that Trump staffers have approached the source’s own company looking for work. “They’re all pretty much sort of scrambling to get out,” said the source, who spoke anonymously to protect the firm where the source works. “We’ve met quite a few who’ve expressed the dismay this is happening, and their only goal is to find a new place.”

A third source—who has close ties to Trump Models—agreed that the situation at the agency is dire and that closing is a real possibility. This source requested anonymity to protect against the possibility of future legal action by the agency.

Corinne Nicolas, president of Trump Model Management, did not respond to questions from Mother Jones. Ronald Lieberman, a vice president at the Trump Organization who has previously responded to press queries about Trump Models, also did not respond to questions about the state of the modeling business. No one answered several calls to the company’s main phone line Wednesday.

Asked about the claims that the agency could soon close its doors, Michael Wildes—a New York attorney who has worked extensively with the agency, as well as with Melania Trump—told Mother Jones, “I’ve been privy to conversations, but I’m not permitted to share anything.”

Still, employees at Trump Models say their work is continuing as normal. Reached on her cellphone Tuesday, Helene Marengo, who works in the agency’s accounts department, said she was unaware of any plans to close her company. “I’m still working. I’m in my office right now, working like normal,” she said. “I have no knowledge of anything happening. As of right now, it’s business as usual.”

A woman who answered the door at the company’s Manhattan office Wednesday said that “of course” the agency remained open for new business.

Last summer, Mother Jones interviewed several foreign-born models who alleged they had worked illegally in the United States with Trump’s agency—a report that was particularly striking in light of Trump’s hawkish stance on illegal immigration. Four former Trump models told Mother Jones they worked for the agency without work visas; one said she worked for the agency for four years without a visa. Records in a lawsuit filed against Trump Model Management by a fifth former model, Alexia Palmer, indicated that she, too, worked for the company without work authorization. (The lawsuit was ultimately dismissed.) 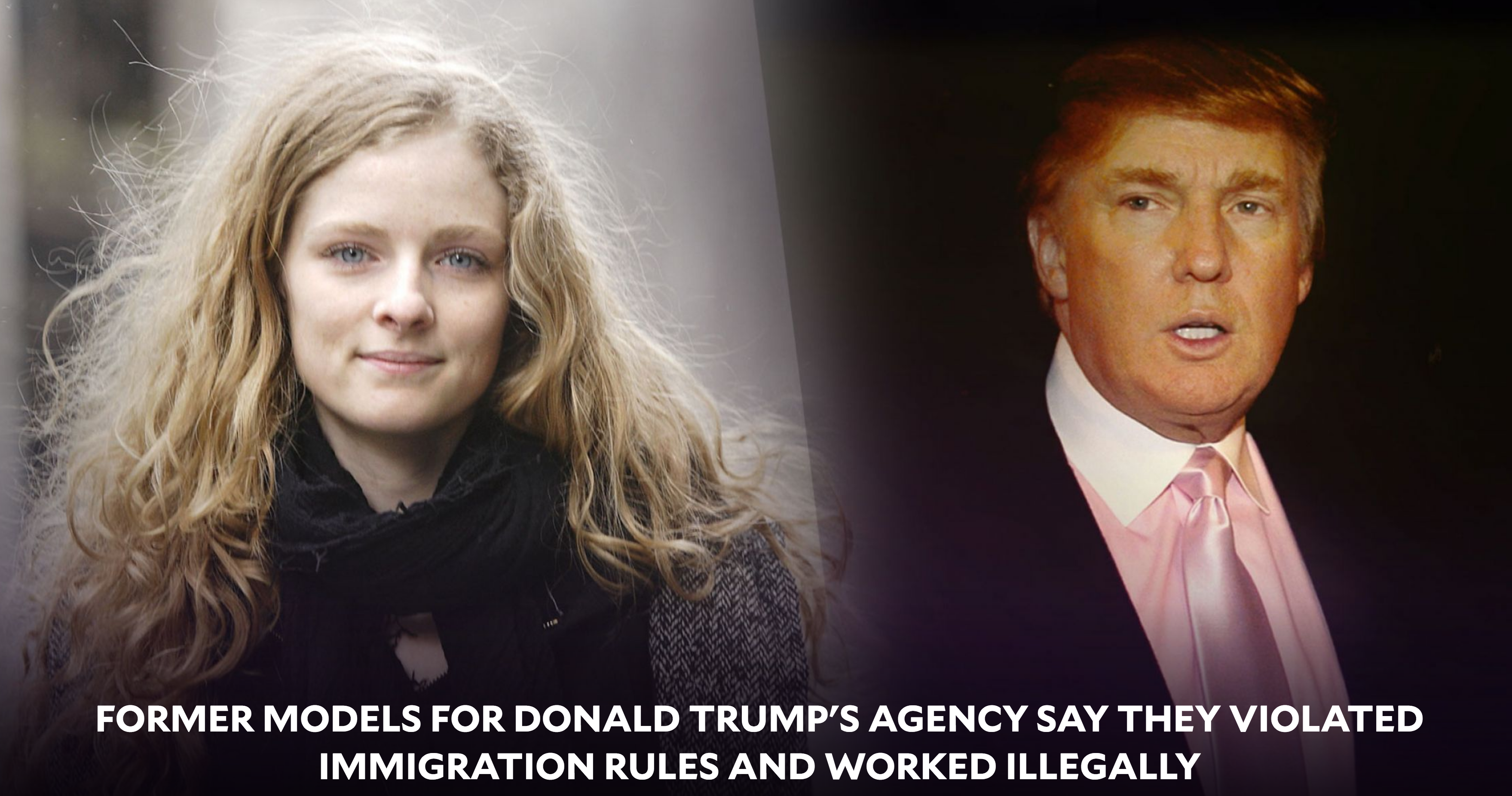 Deren, the Paris booker, said agencies have recently suffered from a general downturn in the modeling business in both Paris and New York. But, she added, the problems at Trump Model Management have more to do with “the political situation”—that is, with Trump.

Since Trump’s campaign, models and their bookers have become increasingly uneasy about working with the president’s agency, said Brandon Hall, the creative director of Sutherland Models, a Toronto agency. He has co-represented roughly 10 models with Trump’s agency over the years and said he currently has about four or five models in common with the company. (Successful fashion models typically have several agents representing them in different markets around the world to book local gigs.) “I would probably be a little reluctant” to work with Trump’s agency, Hall said—adding that models themselves might be even more reluctant to sign with Trump.

One model Hall represented recently didn’t want to meet with Trump’s agents in New York, he said. “It’s just sort of what has transpired because of the election and what has arisen from that,” he said, attempting to explain the apparent aversion to Trump’s agency in the modeling world. “I’m sure he’s gained in some ways and is suffering in others. And I think in the entertainment industry and the fashion industry, [among] actresses, models, he’s not well liked.”

“As a woman, a mother, an American and a human being, I cannot wake up Wednesday morning being the least bit related to the Trump brand,” wrote model Maggie Rizer.

According to his most recent financial disclosures, Trump owns an 85 percent stake in the agency. He earned nearly $2 million in commissions from it in 2015. But since the election, the modeling firm he founded in 1999 has suffered from a series of staff defections, including longtime Trump agent Duane Gazi-White, who traveled the globe scouting new modeling talent at pageants and Miss Teen USA contests. He recently went to work for a Trump competitor, New York Models, as director of new faces and development. (Gazi-White did not respond to requests for comment.)

Another Trump agent, Gabriel Ruas Santos-Rocha, recently left Trump Models to set up a new modeling firm called Anti Management, which launched last month. “I did not start an agency with the intent of taking someone out of business,” Santos-Rocha told the Washington Post this week. “Outside of that I have no comments.” (Rocha wouldn’t comment for this story.)

Rocha told Refinery29, the fashion news site, that Trump models were finding it tough to stay with the company because of Trump’s brand. “The people who got the worst of it were the models; they’d arrive on set and people would say, ‘Oooh, you’re from Trump [Models]? How dare you,’ or ‘Why are you still with them?'” Rocha said, according to the article. “They were constantly harassed by employees on shoots, especially by other models.” Refinery29 first reported that a possible boycott among industry stylists and photographers was being discussed in early February.

Then there are the models. Katie Moore, a breakout star from New York’s Fashion Week in February 2016, and a rising talent in the modeling world, is preparing to leave Trump’s firm in search of new representation, according to Tabitha Garcia, her Texas-based agent. Garcia told Mother Jones that too many Trump agents were leaving the agency for Moore to continue her career there—the situation had become untenable. “Most of Katie’s agents have moved on to other agencies and we are exploring those options for her right now,” Garcia wrote in an email. “An agent really makes the model…That is why it is sad to have this happen.”

“I will be flying to NYC next week to meet with agencies with Katie to continue her career at another agency,” Garcia added. “The staff at Trump have been nothing but kind and amazing along our journey and I am sad that we had to make this hard decision.”

Other top Trump models have also fled the agency. Shirley Mallmann signed on with Anti. Veteran supermodel Maggie Rizer blamed Trump’s politics when she exited the company on the eve of the November election. “As a woman, a mother, an American and a human being, I cannot wake up Wednesday morning being the least bit related to the Trump brand,” Rizer wrote on Instagram.

Trump Model Management might be a small part of the president’s business empire, but it did seem to be particularly close to his heart. It augmented his brand as a playboy, and he enjoyed cross-pollinating his other businesses with Trump models. He personally signed talent directly from his Miss Universe and Miss USA competitions. And Trump Models appeared on his reality show, The Apprentice. Melania Trump was once represented by the agency.

At the agency’s launch party in 1998, Trump issued a promise about the company, as described by New York Magazine. Flanked by his business partner and the supermodel Daniela Pestova, Trump rose for a toast. “To the richest agency,” he declared. Now that agency could become the first piece of his business empire to fall victim to his polarizing presidency.