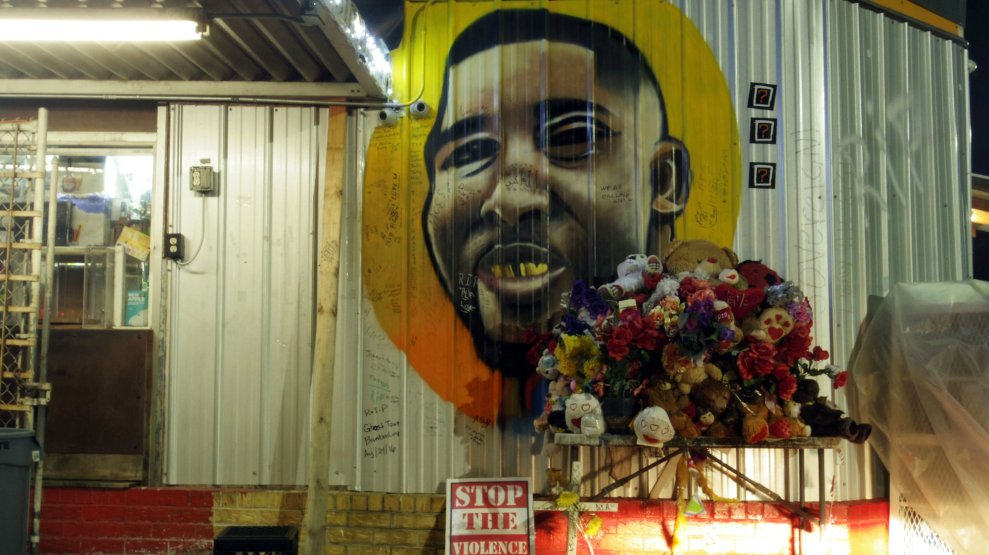 A mural of Alton Sterling in Baton Rouge, Louisiana.AP

The Department of Justice will not pursue criminal charges against an officer involved in the videotaped shooting of a man in Baton Rouge, Louisiana, last summer, the Washington Post has reported. The announcement—expected tomorrow—will be the first time under Attorney General Jeff Sessions that the department has publicly declined to press charges against an officer investigated in a high-profile police shooting case.

Alton Sterling, 37, was shot and killed by a Baton Rouge Police Department officer in July 2016, setting off days of protests in the city and nationwide. Two officers had responded to a call about a man outside a convenience store who had waived a gun at someone else. When they arrived, they found Sterling outside the store selling bootlegged CDs. A confrontation ensued in the parking lot (the beginning of the incident was not caught on camera), and an officer tased Sterling after ordering him to the ground, cell phone footage of the encounter shows. Sterling remained on his feet, and an officer tackled him while another rushed to handcuff him. In a second cell phone video, one officer is heard yelling “He’s got a gun!” Then he fires several shots into Sterling. Sterling was armed, but it’s unclear from either video whether he reached for his weapon before he was shot. Witnesses told local new outlets that Sterling never reached for his gun during the encounter.

In a statement after the incident, then-candidate Donald Trump called the shooting “senseless [and] tragic” and offered condolences to Sterling’s family.”

Sterling’s shooting occurred the day before an officer shot and killed another man in a Minneapolis suburb in an incident that was streamed in part on Facebook Live by the man’s girlfriend, and in the same week that a black man—admittedly upset over police shootings of black men—opened fire on officers at a protest over the two shootings in Dallas, killing nine. Just over a week after that incident, three more officers were killed ambush-style in Baton Rouge.

The Obama DOJ launched a criminal investigation into whether the officer who shot Sterling had willfully violated his civil rights by doing so. On Tuesday, the Trump DOJ—led by adamantly pro-police Attorney General Jeff Sessions—will announce that it will not pursue charges against the officer, the Washington Post reports. The decision is not unsurprising—civil rights cases are notoriously difficult to prove in court. The DOJ declined to file criminal charges against officers involved in high-profile police shooting cases on numerous occasions under President Obama, including in the case of of Michael Brown in Ferguson in August 2014.

We all saw the video. #AltonSterling was shot in cold blood. The DOJ’s decision not to pursue justice is a travesty. https://t.co/5F9IPQwNud

The report of the Sterling decision comes amid a flurry of other police-related news this week, including the police shooting death of a 15-year-old boy in a Dallas suburb over the weekend and news today that the officer filmed shooting a North Charleston, South Carolina, man in the back multiples times in April 2015 had pleaded guilty to federal civil rights charges similar to those considered in the Sterling case. You can read Mother Jones‘ deep dive investigation into the trial of that officer here.