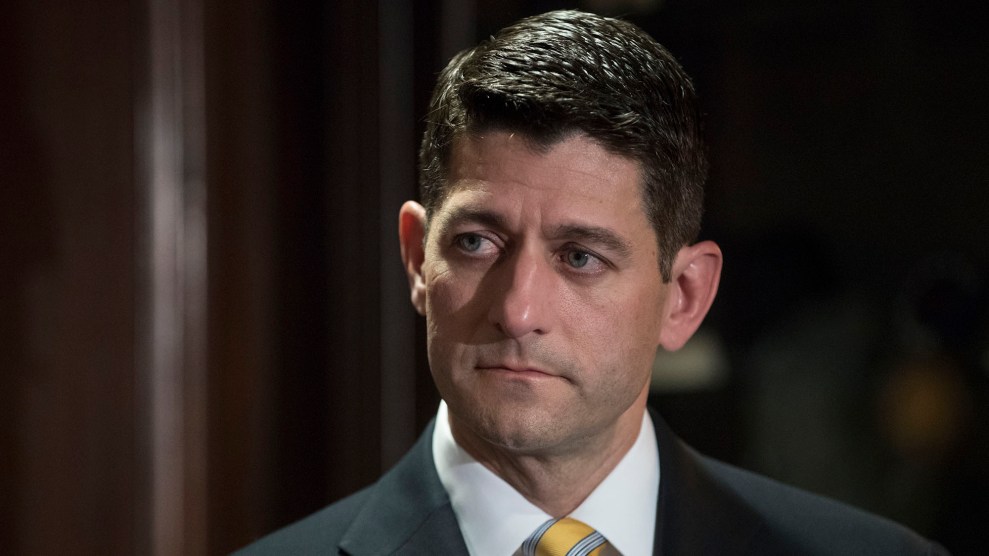 The Congressional Budget Office delivered brutal news to House Republicans on Wednesday. Their health care bill will cost 23 million people their health insurance over the next decade, according to the CBO’s new analysis.

House Republicans passed their health care plan, the American Health Care Act, earlier this month, before the CBO had time to run the numbers. As Republicans now struggle to defend the bill they’ve already approved, they’ve latched onto one piece of good news contained in the CBO report: The average premiums will decrease between 4 percent and 20 percent by 2026. The drop will vary by state, depending on which states take advantage of waivers in the bill that would allow less generous coverage.

This @USCBO report again confirms that the American Health Care Act will lower premiums and the deficit. https://t.co/kmjeUP2qqF pic.twitter.com/YJnXUyD3xO

While technically true, this argument is highly misleading. The CBO does not prophesy a buffet of cheap plans for buyers on the individual market to choose from. Instead, it is simply calculating the average premium it believes people will pay on the open market under the House Republicans’ health care plan. And there are two main reasons the CBO believes that average will ultimately fall. First, plans will be cheaper because they will provide less coverage. Second, because the bill allows insurers to charge older people more and provides less generous subsidies, many older, sicker people will be priced out. Put simply, the average premium goes down because the market will target young, healthy people while pricing out older, sicker people.

“Both the scope of benefits would be less and then the population would change, and that’s why premiums would go down,” says Edwin Park, vice president for health policy at the Center on Budget and Policy Priorities. In short, comparing today’s premiums to those under the GOP bill is comparing apples and oranges. In this case, the apples are comprehensive plans available to all, and the oranges are skimpier plans geared toward the young and healthy. For most people keeping the same coverage, according to Park, premiums would actually go up.

And the killer table: A lower-income 64-year-old would still see their premiums rise by $12k to $14k pic.twitter.com/JE8bewRv2U

When the CBO scored the first iteration of the GOP health care bill in March, it predicted that in 10 years, premiums would be 10 percent lower on average. In the latest version, Republicans have managed to drive premiums down even further, by around 20 percent in states that choose to take advantage of coverage waivers. This is accomplished by allowing insurance companies to offer even stingier plans than in the previous version of the bill. The current bill alters the requirement under current law that insurers cover essential health benefits, such as prescriptions, mental health treatment, and maternity and newborn care, allowing states to greatly roll back the kinds of care that are included. “The average premium is weighted by what they think people are going to enroll in, and that’s going to be less generous plans,” Park says.

But lower premiums may not result in meaningful savings. According to the CBO, although premiums will go down, out-of-pocket costs will rise substantially. The Affordable Care Act, known as Obamacare, required plans to cover at least 70 percent of all eligible benefits. But that provision is gone in the House GOP bill, resulting in plans with higher deductibles and more out-of-pocket costs for covered services. And whereas Obamacare has a cost-sharing feature to help low-income Americans with their co-pays and deductibles, the GOP bill eliminates this extra funding.

As the CBO’s analysis states, “Although premiums would decline, on average, in states that chose to narrow the scope of [essential health benefits], some people enrolled in nongroup insurance would experience substantial increases in what they would spend on health care.” The report singles out “out-of-pocket spending on maternity care and mental health and substance abuse services,” predicting that people on the individual market would see their costs increase by “thousands of dollars in a given year.”

People who prefer a more comprehensive plan with lower deductibles and out-of-pocket expenses may be out of luck. Cheaper plans with minimal coverage will attract the healthiest people. The CBO predicts that insurers will stop offering more comprehensive plans—those equivalent to today’s gold or platinum plans—because they assume that mostly sicker people will buy them.

So when Republicans brag that their plan lowers premiums, that’s true. But it does it by providing worse coverage to fewer people with higher out-of-pocket expenses. Only the young and healthy are likely to save under the new plan—at least until they get sick.