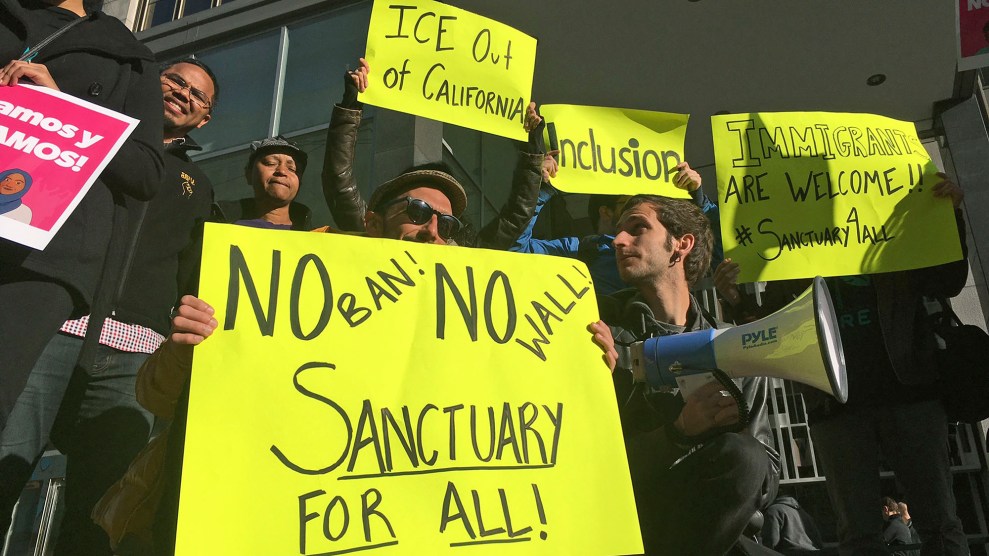 Included in the White House’s budget proposal is language that would allow the administration to circumvent a court order and take away funds from state and local governments that protect undocumented immigrants. The little-noticed provision, tucked into the 1,300-page proposal released Tuesday, would permit the Justice and Homeland Security departments to withhold funding for jurisdictions that do not aid in the enforcement of the nation’s immigration laws.

On the campaign trail, Donald Trump promised to “end” so-called sanctuary jurisdictions—places where local officials have refused to cooperate with federal immigration agents—by cutting off federal funding. In his first week in office, Trump signed an executive order to do just that. But his attempt to defund local jurisdictions quickly ran into legal trouble. Last month, a federal judge in San Francisco blocked the order. Among other factors, the judge found that the president had overstepped his authority by authorizing the executive branch to withhold funds appropriated by Congress.

The government’s own lawyers effectively conceded the point. In court, Acting Assistant Attorney General Chad Readler defended the order by arguing that, contrary to the public statements of the president and Attorney General Jeff Sessions, the order was “narrow” and would affect only a small number of federal grants. In other words, the government was arguing that all the talk about defunding sanctuary cities was just that: talk. Sessions himself seemed to give up on the defunding plan on Monday when he released a memo with a narrow interpretation of a sanctuary jurisdictions, limited to localities that violate US Code 1373, a federal law that concerns communication between local and federal officials and does not mention detaining immigrants. “[T]he term ‘sanctuary jurisdiction’ will refer only to jurisdictions that ‘willfully refuse to comply with 8 U.S.C. 1373,'” the memo states. The libertarian Cato Institute, which is pro-immigration, hailed the memo as “good news for constitutionalists and federalists who oppose the federal government bullying cities and states.”

But the Trump administration’s budget changes all that. In two separate sections of the nearly 1,300-page document, the administration aims to broaden US Code 1373’s definition of a sanctuary jurisdiction and give the Justice and Homeland Security departments the ability to withhold more funding—including grants aimed at preventing terrorism.

“We thought, this is them kind of capitulating,” says Phil Wolgin, managing director of immigration policy at the liberal Center for American Progress, referring to Sessions’ memo. “And then we see this language today which would radically redefine 1373 to do all the things that they’ve been trying to do.”

In other words, the court said Trump couldn’t enforce his sanctuary city policies without Congress’ authorization, so Trump’s budget, a blueprint submitted to Congress, asks the House and Senate to do what he cannot do alone. The proposed new language for US Code 1373 “puts a gun to the head of jurisdictions and says, ‘You must comply or we’ll take away your money,'” Wolgin says.

A key portion of Trump’s budget proposal authorizes the withholding of public safety funds for non-compliance with federal officials: “The Secretary of Homeland Security or the Attorney General may condition a grant or cooperative agreement awarded by the Department of Homeland Security or the Department of Justice to a State or political subdivision of a state, for a purpose related to immigration, national security, law enforcement, or preventing, preparing for, protecting against or responding to acts of terrorism.”

If Congress adopts this language, Sessions and Homeland Security Secretary John Kelly could withhold funds to jurisdictions that do not comply with requests for information about individuals and requests to detain individuals. The departments could also force jurisdictions to promise compliance with such requests as a condition of receiving future grants.

Wolgin says “the fact that they need to change the law” is “another capitulation that under current law they do not have the authority to go after what they call so-called sanctuary jurisdictions.” But that’s cold comfort for immigrant advocates if Congress adopts this language. Though a president’s budget is never adopted wholesale by Congress, Republicans in Congress may well go along with this new attempt to defund sanctuary jurisdictions. Wolgin believes that it could end up in an appropriations bill or another piece of legislation.

Based on Sessions’ Monday memo, it seems likely that he knew this change would be tucked into the budget and is hoping it will pass. “We think they knew this was coming,” says Wolgin. “As far as I can tell in the Sessions memo, nothing would need to change if the law changes.”

What looked like a capitulation on the issue of sanctuary cities was, it seems, just a change in tactics.