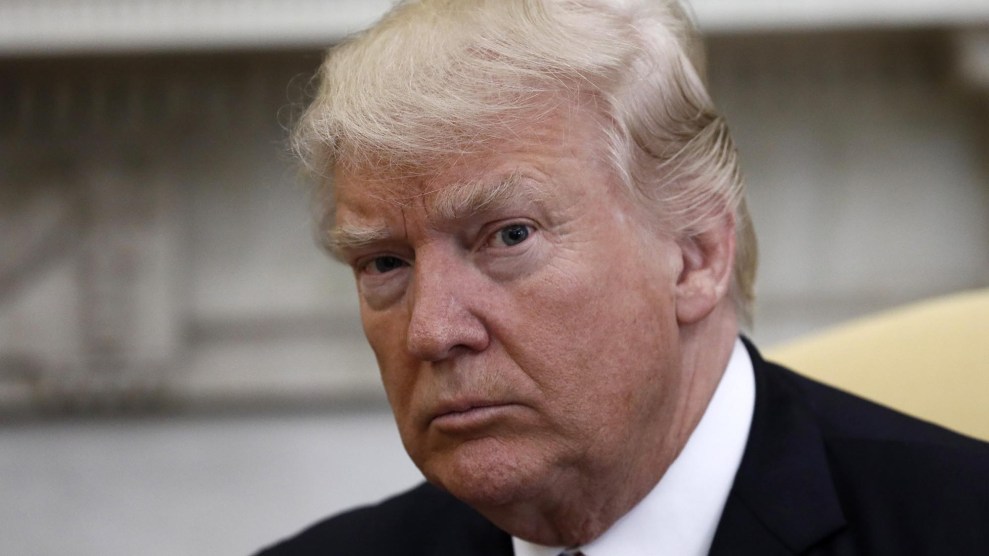 President Donald Trump’s firing of FBI Director James Comey amid the escalating Russia scandal drew allusions to Richard Nixon’s termination of Archibald Cox, the investigator looking into the Watergate affair. But Friday morning, after Trump threatened Comey by exposing “tapes” of their conversations, another comparison came to mind for Dave Gomez, a retired FBI agent who spent nearly 30 years at the bureau.

“This is actually a reversal of the worst fears any president ever had about Director Hoover,” said Gomez, referring to former FBI Director J. Edgar Hoover’s practice of gathering compromising material on foes to keep them in line. “We now have a president trying to blackmail a former director with a…wiretap.”

James Comey better hope that there are no “tapes” of our conversations before he starts leaking to the press!

Trump’s threat came the morning after NBC aired an interview in which he called Comey a “showboat” and a “grand-stander” and said that the FBI has “been in turmoil” and hasn’t recovered from Comey’s handling of the Hillary Clinton email investigation. Shortly after the interview aired, the New York Times—citing people close to Comey—published a bombshell report that Trump had “demanded” loyalty from Comey during a private dinner shortly after taking office. According to the Times’ sources, the famously independent Comey declined to pledge loyalty and instead promised “honesty.”

Trump’s you’re-on-tape threat, it seems, did not stop the stream of leaks from people “close to Comey”:

A source close to Comey told me this morning: “He hopes there are tapes. That would be perfect.”

On Thursday, Acting FBI Director Andrew McCabe told the Senate intelligence committee that Comey “enjoyed broad support within the FBI and does to this day,” directly refuting the White House line that Comey had lost the confidence of rank-and-file FBI employees. Thomas O’Connor, president of the FBI Agents Association, told Politico that Comey’s firing was a “gut punch to the organization.”

“Trump just made an enemy of the entire FBI.”

In interviews with Mother Jones, several retired FBI agents who are regularly in touch with colleagues still at the bureau agreed with the assessment that Comey had widespread support within the bureau. Each of the retired agents was critical of Trump’s decision to fire Comey and doubted the White House’s initial claims that Comey’s handling of the Clinton email controversy was the reason he was booted. Each said that Trump’s actions will make relations between the nation’s top law enforcement agency and the White House worse.

“If you ever wanted to write a dialogue or a plan for how to piss off an agency, that’s the way to do it,” said David Rubincam, a retired FBI agent who spent more than 20 years in bureau postings in the United States and overseas. “Trump could not have scripted an epic fail any better than that.”

Rubincam, who said he was critical of Comey’s public handling of the Clinton investigation, noted that regardless of political ideology, people within the FBI have told him that agents are now redoubling their efforts to investigate Russian interference in the 2016 election and possible collusion between Trump associates and Russia.

“The bottom-line feeling is: ‘OK, whoever is working this Russian investigation on the Trump campaign, leave no stone unturned,'” Rubincam said. “If it wasn’t a priority before, [it’s] damn sure a priority now. Trump just made an enemy of the entire FBI.”

Rubincam said it’s not just that Trump fired Comey, as the president obviously has the right to do that. It was the way he did it. According to reports, Comey was speaking to FBI agents at the Los Angeles field office when he learned of his ouster from a news report on television. “It was more than tacky,” Rubincam said. “It’s classless, it’s mean, it’s offensive. It’s the epitome of disrespectful.”

Nancy Savage, the executive director of the Society of Former Special Agents of the FBI, said she was “shocked” by the way Trump fired Comey. “That was pretty appalling,” said Savage, who served in the agency for more than 30 years. She noted that there were some within the bureau who didn’t agree with the way Comey dealt with the Clinton case—whether they thought he was too aggressive, or too lenient—but, she added, “no one questioned his integrity or competence.”

“You may see an internal revolt against the new director.”

If Trump was hoping to use Comey’s termination to shut down the Russia investigation, he may have made a mistake. Asked what would happen within the FBI if a new director tried to kill the probe, all three former agents said it wouldn’t go well.

“They are not going to be pulled off an investigation if there’s valid evidence there,” Savage said. “The nature of agents is, they’re hound dogs. They’re not going to stop.”

Gomez said the director Trump appoints could try to end the investigation, but “I think that’s when you’re going to see a lot of resistance, both vocal and passive, from people within the FBI. You may see an internal revolt against the new director.”

And Rubincam said an investigation of this size has to run its course. “Think of it like an oil tanker in the water,” he said. “It takes six miles to stop.”

But even so, a new director could come in and kill the investigation, right?

“I can’t envision that happening,” Rubincam said. “That would be a galactically stupid move, to try to shut down a case of that magnitude for political reasons.”