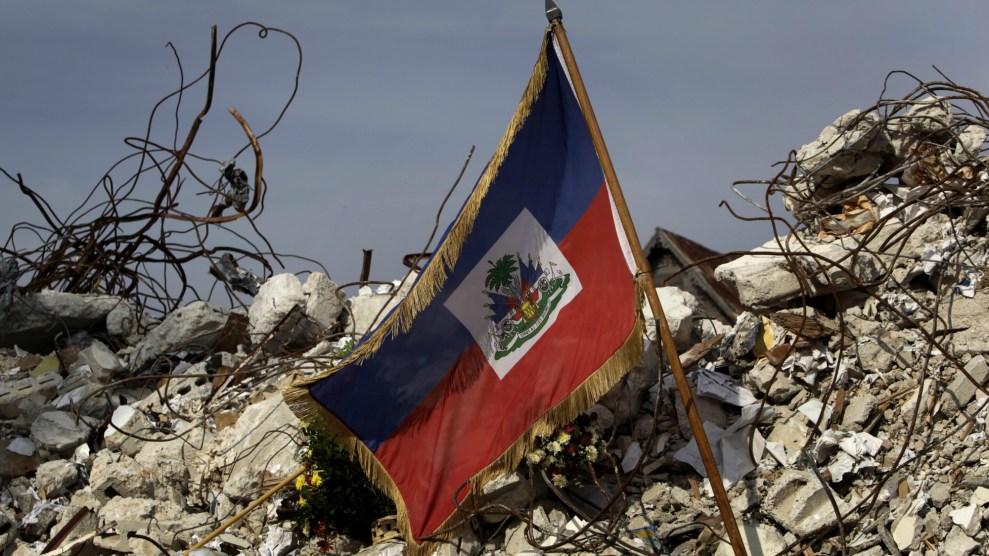 A Haitian flag sits in the rubble after the 2010 earthquake.Ramon Espinosa/AP Photo

Lys Isma lives legally in the United States. She has no memory of ever living anywhere else. But depending on a decision the Trump administration is expected to make by Tuesday, she could be forced to move to Haiti.

The Department of Homeland Security is set to announce whether it will extend a program that allows Haitian nationals to live in the United States because of the dire conditions in Haiti. The Caribbean nation had yet to fully recover from the 2010 earthquake when contamination at a UN base caused a cholera epidemic that has killed 10,000 people. Last October, Hurricane Matthew ripped through the country, killing hundreds more, destroying crops and homes, and displacing thousands.

After the earthquake, the Obama administration gave Haiti a Temporary Protected Status designation. First introduced in 1990, the TPS program provides humanitarian relief to nationals of countries coping with a severe conflict or natural disaster. By providing recipients with legal status and work authorization, TPS designations—typically granted in 6- to 18-month cycles that can be renewed indefinitely—have become a crucial means of aiding people who face unsafe conditions should they be sent back to their home country.

Isma was only nine months old when she came to the United States from Haiti with her family, which continued to live in the country without documents. “It wasn’t until my father was deported when I was seven that I truly understood what it meant to live in fear,” she said on a recent press call organized by immigration advocates.

The 2010 earthquake was a turning point in Isma’s life. “I fell into kind of a depression until January 2010,” she said. “[It] was the worst and best month of my life.” Although the earthquake left her devastated and worrying about her family in Haiti, it also presented an opportunity for legal immigration status. “I was able to get a job and send money home and have dreams and goals for myself again,” she said.

But now all Isma’s plans—both for herself and for her family in Haiti, which depends heavily on remittances from relatives in the United States—hinge on the Trump administration’s decision.

The Department of Homeland Security determines which countries receive TPS designations and when a country has progressed enough to be removed from the program. Haiti will reach the end of its current 18-month term in July. If its designation is not extended, some 50,000 people will be forced out.

If Haitians lose their protected status, “some will go back. But I’m pretty sure that a great number will go underground.”

The decision will affect tens of thousands of people and their families currently living and working in the United States. If Haiti’s TPS designation is not renewed, they will be forced to decide whether to go back to Haiti or live as undocumented immigrants.

Marleine Bastien is the executive director of Famn Ayisyen nan Miyami (or Haitian Women in Miami), an organization that works with Haitians in the Miami area. For weeks, TPS holders have been coming into her office seeking advice on what to do if the Trump administration doesn’t extend Haiti’s designation.

“Some will go back,” Bastien says. “But I’m pretty sure that a great number will go underground.”

Haiti’s TPS designation has been extended regularly since 2010; its current designation expires on July 22. DHS is required to announce the extension or termination of a country’s designation at least 60 days before it expires. In Haiti’s case, that means that a final decision must come down by Tuesday.

In December, at the request of Secretary of State John Kerry, US Citizenship and Immigration Services (USCIS) recommended that Haiti’s TPS designation be extended. “While Haiti continues to make progress in a variety of fields, the pace and scope of recovery has been uneven, and the country remains vulnerable to external shocks and internal fragility,” the agency noted. “Many of the conditions prompting the original January 2010 TPS designation persist.”

But in April, USA Today reported that James McCament, acting director of USCIS, had recommended to new Homeland Security Secretary John Kelly that Haiti’s designation be extended to next January and then allowed to expire. Immigrant advocates argued that the recommendation contradicted not only the December report from USCIS but also Donald Trump’s campaign promise that he would be Haitians’ “biggest champion.” In the weeks since McCament’s updated recommendation was revealed, advocates, humanitarian aid groups, and politicians on both sides of the aisle have called for Kelly to continue the program.

TPS is not intended to create a path to permanent residency in the United States, and there are few options for remaining in the country legally once a country’s TPS designation ends. A small number of TPS recipients may be eligible for green cards through the sponsorship of a family member with US citizenship, but the vast majority of TPS holders will no longer be protected from deportation.

“Why push people into a corner when they’ve made a life here and are gainfully employed and taking care of their families?” asks Bastien.

Losing TPS could have ripple effects beyond the Haitians currently in the program. According to a recent report from the Immigrant Legal Resource Center, if Honduras, El Salvador, and Haiti—the three countries with the largest number of TPS recipients—are all removed from the program, the US economy would lose $45.2 billion over the next decade. And it could cost some $3.1 billion to deport all TPS holders from those three countries, according to the report.

“The Haitian program is so important,” says Stephen Legomsky, a USCIS chief counsel during the Obama administration. He points to the money TPS holders regularly send back to family members in Haiti, an economic boost that would be difficult to replace if the program ended. Given current conditions in Haiti, “there would be tremendous human hardship on a huge scale” if thousands of people were to return to the country at once, he says.

It doesn’t seem likely that the Trump administration is considering Haitian contributions to the economy in making its decision.

Many Haitians will simply not return to Haiti if their TPS designation expires. The people who stay will be residing in the United States illegally during a time of heightened fear among undocumented immigrants.

Bastien doesn’t have many solutions for people who come to her for advice. “Every day we see people come here to our center at a loss,” she says, adding, “This is not a decision you can really counsel people on. What do you do? Do you put your house for sale? Do you close your business?”

Reno Simeon, a Haitian man living in the Miami area, works two jobs as a utilities worker and a cook. Simeon came to the United States in 1999 and met and married his wife, who is a green card holder. He would be forced to leave if Haiti’s designation ends, but his wife’s immigration status would protect her. If his status is revoked, he doesn’t have a set plan. “I wanted to go to Canada,” he says, “but my wife says no.” There is a large Haitian population concentrated in Montreal.

“I would love for the politicians to know that TPS is the most important for the Haitian people,” says Simeon. “We work really hard, we pay taxes, we contribute to the economy, and to the country.”

But it doesn’t seem likely that the Trump administration is considering Haitian contributions to the economy in making its TPS decision. Earlier this month, the Associated Press reported that the administration was looking for evidence of crimes by Haitians in the United States and trying to tabulate how many TPS holders had used public benefits, potentially as fodder to justify ending TPS. The requests for criminal information—which coincided with the launch of a DHS office that will focus on crimes committed by immigrants—are particularly unorthodox. According to advocates and immigration experts, the behavior of TPS recipients has never factored into the decision on a country’s designation, and even if it did, criminal history is already a criterion in determining whether a TPS applicant qualifies for the program.

Regardless of the administration’s decision, Simeon is staying in the United States. “We can’t go back,” he says. Simeon, and thousands like him, will become undocumented by January if the Trump administration takes Haiti off the list. “We’ll be living in fear,” he says. “That’s why I’m praying to God every day that they renew the status.”