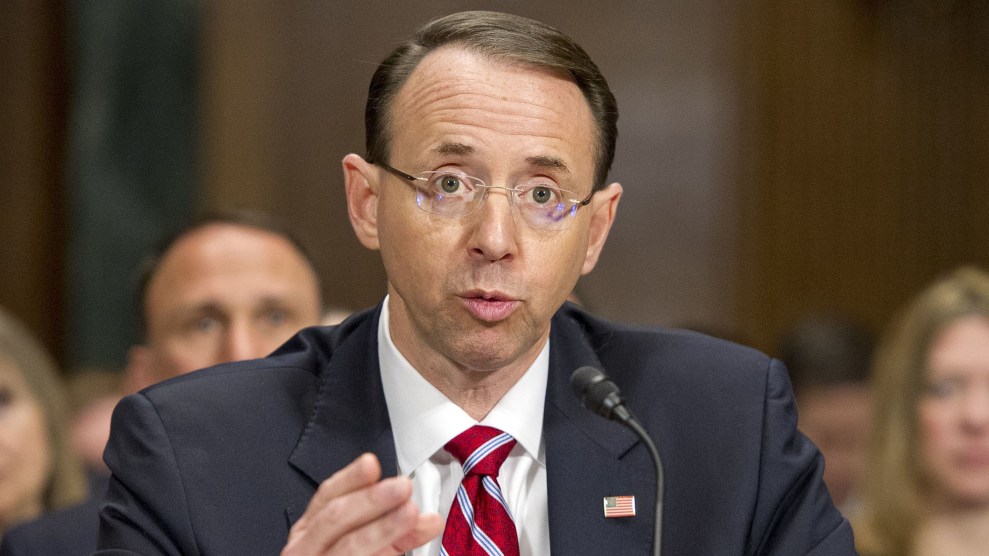 President Donald Trump wanted to fire FBI Director James Comey long before Deputy Attorney General Rod Rosenstein wrote a memo in support of his ouster, Rosenstein told senators on Thursday. The White House put Rosenstein at the center of the growing storm last week when it claimed his memo was the catalyst for the firing. But according to Rosenstein, while he supported Comey’s firing, his memo on Comey neither instigated his removal nor was meant to justify it.

Rosenstein’s side of the story—bits of it, at least—came out Thursday afternoon after he briefed the Senate on Comey’s firing, when senators summarized his testimony to reporters. On Friday, the Justice Department released some of Rosenstein’s remarks delivered to the senators. Those remarks verify some pieces of the emerging story around the firing and contradict the White House’s initial narrative.

According to Rosenstein, Attorney General Jeff Sessions was interested in removing Comey even before he assumed that role. “In one of my first meetings with then-Senator Jeff Sessions last winter, we discussed the need for new leadership at the FBI,” Rosenstein told senators. One of Sessions’ main problems with Comey, Rosenstein’s remarks suggest, was that Comey was too independent of top Justice Department officials. “Among the concerns that I recall were to restore the credibility of the FBI, respect the established authority of the Department of Justice, limit public statements, and eliminate leaks,” he said.

Rosenstein went on to confirm that he heard about Comey’s impending removal on May 8, the day before it happened, and that Trump “sought my advice and input.” In response, Rosenstein drafted his memo that criticized Comey’s handling of the investigation into Hillary Clinton’s email use. He sent that memo to Sessions the next afternoon—just a few hours before Comey’s firing was made public that evening. Trump has at various times since May 9 pinned the dismissal on Rosenstein and contradicted that line by saying was planning to fire Comey regardless of Rosenstein’s memo. But Rosenstein makes clear that the decision came from Trump, not him. “My memorandum is not a statement of reasons to justify for-cause termination,” he told senators. But he agreed with the decision, saying, “I thought it was appropriate to seek a new leader.”

Rosenstein also denied press reports that Comey had requested more resources for the investigation into Russian interference in the election prior to his firing. “I am not aware of any such request,” he told senators. “Moreover, I consulted my staff and Acting FBI Director Andrew McCabe, and none of them recalls such a request.”

Despite these revelations, Democratic senators left the briefing Thursday feeling that many of their questions about Comey’s dismissal had gone unanswered.

Here are the now-public portions of Rosenstein’s remarks:

Good afternoon.  I welcome the opportunity to discuss my role in the removal of FBI Director James Comey, although I know you understand that I will not discuss the special counsel’s ongoing investigation. Most importantly, I want to emphasize my unshakeable commitment to protecting the integrity of every federal criminal investigation. There never has been, and never will be, any political interference in any matter under my supervision in the United States Department of Justice.

Before I discuss the events of the past two weeks, I want to provide some background about my previous relationship with former Director Comey. I have known Jim Comey since approximately 2002. In 2005, when Mr. Comey was Deputy Attorney General, he participated in selecting me to serve as a U.S. Attorney. As a federal prosecutor, he was a role model. His speeches about leadership and public service inspired me.

On July 5, 2016, Director Comey held his press conference concerning the federal grand jury investigation of Secretary Clinton’s emails. At the start of the press conference, the Director stated that he had “not coordinated or reviewed this statement in any way with the Department of Justice…. They do not know what I am about to say.”

Director Comey went on to declare that he would publicly disclose “what we did; what we found; and what we are recommending to the Department of Justice.” He proceeded to disclose details about the evidence; assert that the American people “deserve” to know details; declare that no “reasonable” prosecutor would file charges; and criticize Secretary Clinton.

I thought the July 5 press conference was profoundly wrong and unfair both to the Department of Justice and Secretary Clinton. It explicitly usurped the role of the Attorney General, the Deputy Attorney General and the entire Department of Justice; it violated deeply engrained rules and traditions; and it guaranteed that some people would accuse the FBI of interfering in the election.

There are lawful and appropriate mechanisms to deal with unusual circumstances in which public confidence in the rule of law may be jeopardized. Such mechanisms preserve the traditional balance of power between investigators and prosecutors, and protect the rights of citizens.

Director Comey attended the Maryland U.S. Attorney’s Office training seminar on October 27, 2016, and gave a detailed explanation of his reasons for making public statements about the conclusion of the Secretary Clinton email investigation. I strongly disagreed with his analysis, but I believe that he made his decisions in good faith.

The next day, October 28, Mr. Comey sent his letter to the Congress announcing that the FBI was reopening the Clinton email investigation. He subsequently has said that he believed he was obligated to send the letter. I completely disagree. He again usurped the authority of the Department of Justice, by sending the letter over the objection of the Department of Justice; flouted rules and deeply engrained traditions; and guaranteed that some people would accuse the FBI of interfering in the election.

Before the Senate Judiciary Committee on May 3, 2017, Director Comey testified under oath about his public statements concerning the Secretary Clinton email investigation. I strongly disagreed with his explanations, particularly his assertion that maintaining confidentiality about criminal investigations constitutes concealment. Nonetheless, I respected him personally.

Former Department of Justice officials from both political parties have criticized Director Comey’s decisions.  It was not just an isolated mistake; the series of public statements about the email investigation, in my opinion, departed from the proper role of the FBI Director and damaged public confidence in the Bureau and the Department.

In one of my first meetings with then-Senator Jeff Sessions last winter, we discussed the need for new leadership at the FBI. Among the concerns that I recall were to restore the credibility of the FBI, respect the established authority of the Department of Justice, limit public statements and eliminate leaks.

On May 8, I learned that President Trump intended to remove Director Comey and sought my advice and input. Notwithstanding my personal affection for Director Comey, I thought it was appropriate to seek a new leader.

I chose the issues to include in my memorandum.

Before finalizing the memorandum on May 9, I asked a senior career attorney on my staff to review it. That attorney is an ethics expert who has worked in the Office of the Deputy Attorney General during multiple administrations. He was familiar with the issues. I informed the senior attorney that the President was going to remove Director Comey, that I was writing a memorandum to the Attorney General summarizing my own concerns, and that I wanted to confirm that everything in my memorandum was accurate. He concurred with the points raised in my memorandum. I also asked several other career Department attorneys to review the memorandum and provide edits.

My memorandum is not a legal brief; these are not issues of law.

My memorandum is not a finding of official misconduct; the Inspector General will render his judgment about that issue in due course.

My memorandum is not a statement of reasons to justify a for-cause termination.

My memorandum is not a survey of FBI morale or performance.

My memorandum is not a press release.

It is a candid internal memorandum about the FBI Director’s public statements concerning a high-profile criminal investigation.

I sent my signed memorandum to the Attorney General after noon on Tuesday, May 9.

I wrote it. I believe it. I stand by it.

Finally, I want to address the media claims that the FBI asked for additional resources for the investigation of Russian interference in the 2016 presidential election. I am not aware of any such request. Moreover, I consulted my staff and Acting FBI Director Andrew McCabe, and none of them recalls such a request.