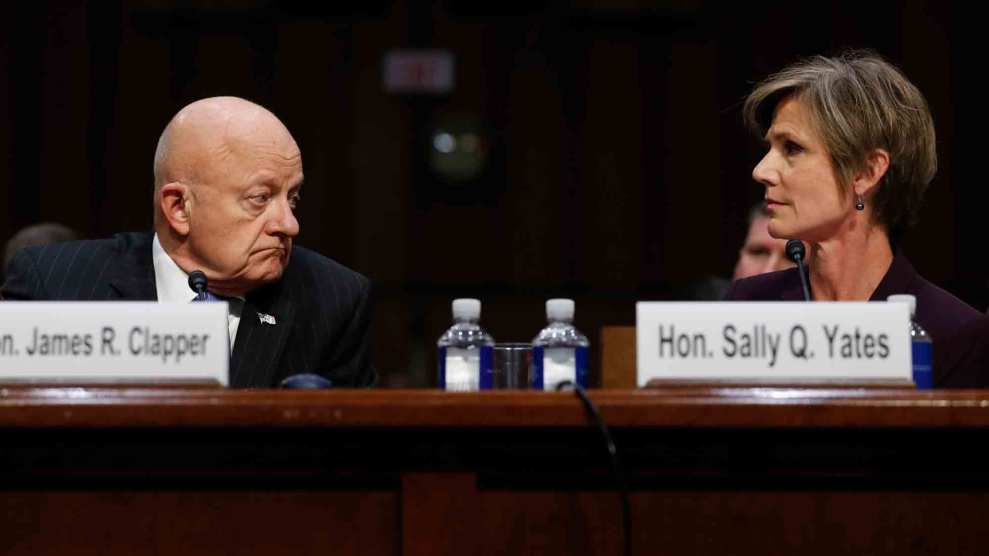 Yates recounted a disturbing tale. She recalled that on January 26, she requested and received a meeting with Don McGahn, Trump’s White House counsel. At the time, Vice President Mike Pence and other White House officials were saying that retired Lt. General Michael Flynn, Trump’s national security adviser, had not spoken the month before with the Russian ambassador to the United States, Sergey Kislyak, about the sanctions then-President Barack Obama had imposed on the Russians as punishment for Moscow’s meddling in the 2016 presidential campaign. Yates’ Justice Department had evidence—presumably intercepts of Flynn’s communications with Kislyak—that showed this assertion was flat-out false.

At that meeting, Yates shared two pressing concerns with McGahn: that Flynn had lied to the vice president and that Flynn could now be blackmailed by the Russians because they knew he had lied about his conversations with Kislyak. As Yates told the members of the Senate subcommittee on crime and terrorism, “To state the obvious: You don’t want your national security adviser compromised by the Russians.” She and McGahn also discussed whether Flynn had violated any laws.

The next day, McGahn asked Yates to return to the White House, and they had another discussion. According to Yates, McGahn asked whether it would interfere with the FBI’s ongoing investigation of Flynn if the White House took action regarding this matter. No, Yates said she told him. The FBI had already interviewed Flynn. And Yates explained to the senators that she had assumed that the White House would not sit on the information she presented McGahn and do nothing.

But that’s what the White House did. McGahn in that second meeting did ask if the White House could review the evidence the Justice Department had. She agreed to make it available. (Yates testified that she did not know whether this material was ever reviewed by the White House. She was fired at that point because she would not support Trump’s Muslim travel ban.) Whether McGahn examined that evidence about Flynn, the White House did not take action against him. It stood by Flynn. He remained in the job, hiring staff for the National Security Council and participating in key policy decision-making.

On February 9, the Washington Post revealed that Flynn had indeed spoken with Kislyak about the sanctions. And still the Trump White House backed him up. Four days later, Kellyanne Conway, a top Trump White House official, declared that Trump still had “full confidence” in Flynn. The next day—as a media firestorm continued—Trump fired him. Still, the day after he canned Flynn, Trump declared, “Gen. Flynn is a wonderful man. I think he has been treated very, very unfairly by the media, as I call it, the fake media in many cases. And I think it is really a sad thing that he was treated so badly.” Trump displayed no concern about Flynn’s misconduct.

The conclusion from Yates’ testimony was clear: Trump didn’t dump Flynn until the Kislyak matter became a public scandal and embarrassment. The Justice Department warning—hey, your national security adviser could be compromised by the foreign government that just intervened in the American presidential campaign—appeared to have had no impact on Trump’s actions regarding Flynn. Imagine what Republicans would say if a President Hillary Clinton retained as national security adviser a person who could be blackmailed by Moscow.

The subcommittee’s hearing was also inconvenient for Trump and his supporters on another key topic: It destroyed one of their favorite talking points.

On March 5, Clapper was interviewed by NBC News’ Chuck Todd on Meet the Press and asked if there was any evidence of collusion between members of the Trump campaign and the Russians. “Not to my knowledge,” Clapper replied. Since then, Trump and his champions have cited Clapper to say there is no there there with the Russia story. Trump on March 20 tweeted, “James Clapper and others stated that there is no evidence Potus colluded with Russia. The story is FAKE NEWS and everyone knows it!” White House press secretary Sean Spicer has repeatedly deployed this Clapper statement to insist there was no collusion.

At Monday’s hearing, Clapper pulled this rug out from under the White House and its comrades. He noted that it was standard policy for the FBI not to share with him details about ongoing counterintelligence investigations. And he said he had not been aware of the FBI’s investigation of contacts between Trump associates and Russia that FBI Director James Comey revealed weeks ago at a House Intelligence Committee hearing. Consequently, when Clapper told Todd that he was not familiar with any evidence of Trump-Russia collusion, he was speaking accurately. But he essentially told the Senate subcommittee that he was not in a position to know for certain. This piece of spin should now be buried. Trump can no longer hide behind this one Clapper statement.

So this hearing indicated that the Trump White House protected a national security adviser who lied and who could be compromised by Moscow, that Trump can no longer cite Clapper to claim there was no collusion, and that US intelligence had sensitive information on interactions between Trump associates and possible Russian agents as early as late 2015. Still, most of the Republicans on the panel focused on leaks and “unmasking”—not the main issues at hand. They collectively pounded more on Yates for her action regarding the Muslim travel ban than on Moscow for its covert operation to subvert the 2016 election to help Trump.

This Senate subcommittee, which is chaired by Sen. Lindsey Graham (R-S.C.), is not mounting a full investigation comparable to the inquiry being conducted by the Senate Intelligence Committee (and presumably the hobbled House Intelligence Committee). It has far less staff, and its jurisdiction is limited. But this hearing demonstrated that serious inquiry can expand the public knowledge of the Trump-Russia scandal—and that there remains much more to examine and unearth.