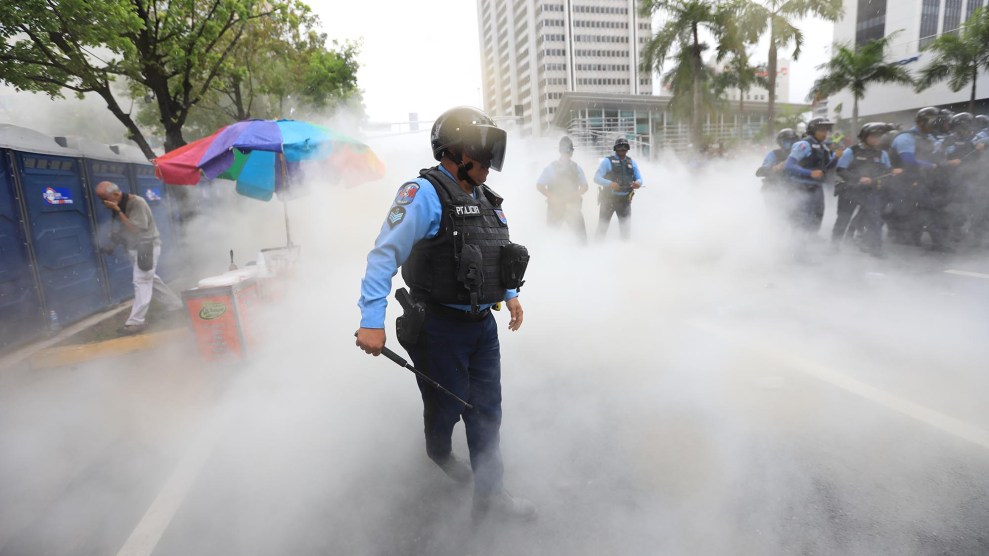 After a day of sometimes violent demonstrations in San Juan protesting austerity measures and government handling of the debt crisis, Puerto Rico Gov. Ricardo Rosselló, announced Wednesday morning that he would move the island’s crushing debts into the bankruptcy-like process created under federal legislation to deal with the crisis. Unlike public entities and cities in the states, Puerto Rico, essentially a colony of the United States, is prohibited from filing for bankruptcy under federal law. This legislation created a different option that allows a federal court to restructure more than $70 billion—the largest such restructuring in the history of the US municipal bond market.

The announcement comes after a flurry of lawsuits filed against the island’s government by creditors Tuesday morning, the first to land after local officials’ proposal for partial repayment of the debt was rejected by lenders last weekend. Under legislation passed last summer, known as the Puerto Rico Oversight, Management, and Economic Stability Act (PROMESA), the island had until May 1 to negotiate a plan to address the debts while also providing basic services for the island’s 3.5 million residents. The deal from the local government last Friday offered as much as 77 cents on the dollar to some lenders while offering 58 cents on the dollar to others, according to Bloomberg, but the lenders called the deal unworkable. Hedge funds such as Aurelius Capital Management, Monarch Alternative Capital, and Ambac Financial Group Inc., an insurer that owned Puerto Rican bonds, had been prevented from filing suit until May 1 under PROMESA.

The suits came a day after thousands took the streets in a national strike throughout Puerto Rico protesting cuts proposed by the board that was created under PROMESA, which increased water rates, while cutting funds to schools, public-sector jobs and pensions, health care spending, and the island’s university system totaling roughly $450 million over three years. After a day of largely peaceful protests, police used tear gas and pepper spray to disperse some protesters, according to local reports, and at least 17 people were arrested. Students and other protesters have demanded an independent audit of the debt, among other things, as the island grapples with the issue.

Massive national strike today in Puerto Rico. We demand a debt audit. For dignity and justice. Against colonialism. #ParoNacional pic.twitter.com/b6mW4HyoBI

“As time goes by and austerity measures start to strike on more and more people, people are going to stand up and respond to what is the government violence against the people who are left in very difficult conditions,” Mariana Nogales Molinelli, an attorney in Puerto Rico and former candidate for the island’s nonvoting representative to the US Congress, tells Mother Jones.

Nogales Molinelli says the cuts by both the government and the control board to public-sector workers and collective bargaining rights have made a lot of people angry—and not just university students. On April 18, the Puerto Rican Senate approved a bill that eliminated the publicly funded audit commission responsible for insuring the debts were issued lawfully and were not in violation of island’s constitution. Some of the protesters at the capital were retired police, according to Joel Cintrón Arbasetti, a journalist with the Center for Investigative Reporting in Puerto Rico. Nogales thinks more police will join the protests.

“My guess is that part of the police force will be joining the people because they are going to be affected also,” Nogales Molinelli says. “Their kids’ schools will be closed, and they will not have enough medical insurance. The situation could explode because of all the austerity measures and they are going to have to work under much more pressure and in conditions that are going to be very difficult for them.”

Nogales says there have also been reports of some violent responses by police toward protesters and those perceived to be organizing protests. During a protest at the capital, she saw a police officer take a protester’s sign and hit her over the head with it. The Puerto Rico Police Department is currently under a consent decree with the US Department of Justice in an effort to become more professional and accountable after years of documented corruption and violence against the population.

Back on the mainland, Puerto Rico has been a political football for Trump and Congress during negotiations for a federal spending bill, with the president implying that Puerto Ricans, who have been US citizens for 100 years, were not.

Democrats are trying to bail out insurance companies from disastrous #ObamaCare, and Puerto Rico with your tax dollars. Sad!

The Democrats want to shut government if we don’t bail out Puerto Rico and give billions to their insurance companies for OCare failure. NO!

When the budget deal was announced Monday morning, Democrats managed to get “an emergency injection of $295 million” to help shore up the island’s Medicaid program through the end of the year, according to Reuters. On Tuesday, Office of Budget and Management Director Mick Mulvaney bragged during a White House press briefing that Republicans and the president had actually prevented any money from going to Puerto Rico, and that the $295 million had come from funds not previously allocated.

“You had the Democrats crying out that they got $295 million for Puerto Rico,” Mulvaney told reporters. “Did not cost the taxpayer a penny. They wanted new money. They wanted a bailout. We wouldn’t give it to them.”

It’s unclear how the restructuring will proceed as the provision in PROMESA has never been used, but the New York Times reports that Chief Justice John Roberts of the US Supreme Court will now appoint a bankruptcy judge to handle the case.