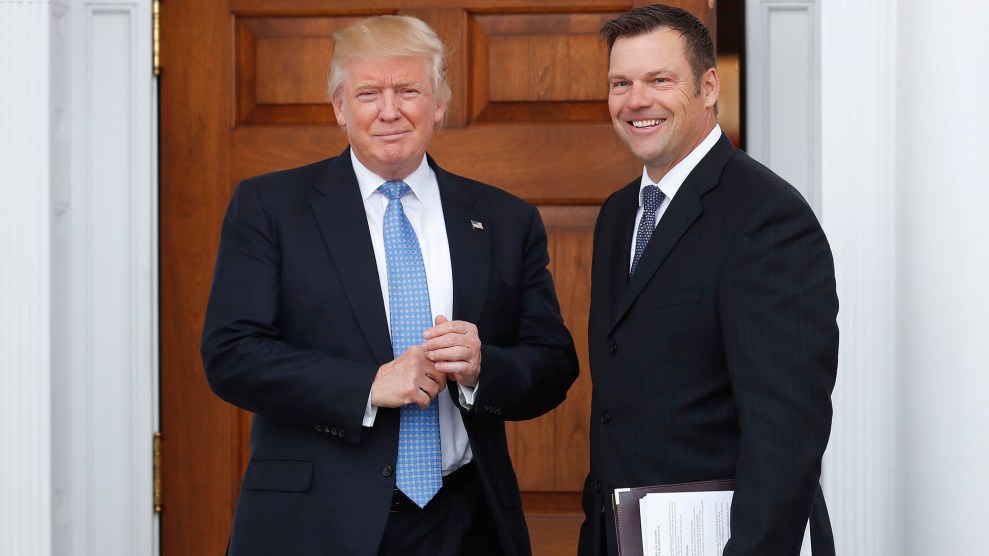 President Donald Trump, who claimed that as many as 5 million people voted illegally in the 2016 presidential election, is expected to sign an executive order Thursday to get to the bottom of his election fraud conspiracy theory.

The order will establish a commission to investigate alleged voter fraud and voter suppression, according to an ABC News report. Vice President Mike Pence will chair the commission. His vice chair will be Kansas Secretary of State Kris Kobach, who is known as an anti-immigration zealot and crusader against voter fraud. ABC reports that the commission will include both Republicans and Democrats and will focus on, according to one administration official, “systemic issues that have been raised over many years in terms of the integrity of the elections.”

Civil rights groups are expressing alarm about the new commission. “In no uncertain terms we condemn the launch of this so-called Presidential Commission on Election Integrity,” Kristen Clarke, president and executive director of the Lawyers’ Committee for Civil Rights Under Law, said in a statement on Thursday. “President Trump is trying to create a distraction from actual threats to our democracy, such as ongoing voter suppression and Russia’s interference in the 2016 election.”

Clarke continued, “President Trump is seeking the counsel of Kansas Secretary of State Kobach, who has a proven record of advocating for discriminatory and burdensome policies that prevent members of minority communities from exercising their right to vote.”

Kobach’s appointment could shatter any bipartisan support the administration may be hoping for. Kobach was the architect of the National Security Entry-Exit Registration System in the aftermath of the September 11, 2001 terrorist attacks, which was known as the “Muslim registry” and condemned by civil rights groups for targeting Muslims. Kobach also helped write the draconian anti-immigrant laws passed in Arizona and Alabama in recent years. Courts struck down several provisions of these laws.

More recently, Kobach has focused his attention on combating voter fraud by making it harder to register to vote and by prosecuting alleged instances of voter fraud. After Kobach won a conviction against a man who voted twice in an election earlier this month, the Kansas City Star lampooned Kobach for his single-minded pursuit of what the article dubbed a “non-issue.” Calling Kobach the “Javert of voter fraud” after the hyper-moralistic cop in Les Miserables, the editorial continued mockingly, “Keep this up, sir, and you may yet prove that of the 1.8 million registered voters in the state, the number of those who have perpetrated this crime is in the double digits.”

Last November, Kobach met with President-elect Trump as part of the transition process. A photographer captured a list of suggested policy priorities Kobach had brought to the meeting, including the reintroduction of the Muslim registry. The document also referred to voter registration rolls. The American Civil Liberties Union, currently suing Kobach’s office over a Kansas law that requires proof of citizenship in order to register to vote, requested the release of the documents Kobach brought to his meeting with Trump. On Wednesday, a federal judge ordered Kobach to produce the documents by Friday.

Pence’s state of Indiana was involved in an election registration imbroglio when the state police shut down a group that was registering minority voters in the state. The state claimed that the group was submitting bogus registration forms, but it’s unclear if those accounted for more than a handful of the tens of thousands of forms the group submitted. On the campaign trail in October, Pence touted the investigation into the group, saying, “I’ll tell you, in the state of Indiana right now, we’ve got a pretty vigorous investigation into voter fraud going on.” Months after the alleged fraud, a prosecutor in Indiana has yet to file any charges against the group.