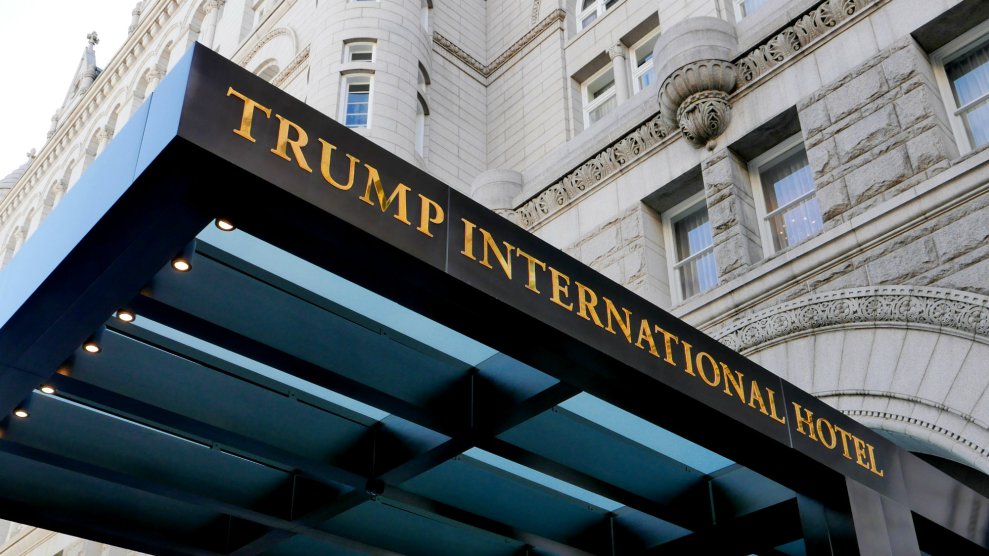 In January, Donald Trump’s lawyer said that the Trump Organization would donate any profits earned at Trump hotels from a foreign government to the US Treasury. The move was supposedly an attempt to stay on the right side of the Constitution’s Emoluments Clause, which prohibits US government officials from taking gifts or benefiting from foreign governments. Ethics experts noted that the pledge, issued by attorney Sheri Dillon, did not truly address this violation of the Constitution. Trump needed to divest his ownership of the hotels, they contended. And now new documents released by congressional Democrats show that Trump is not taking even his insufficient effort seriously.

Because Trump still owns his hotel properties and companies that operate hotels, anyone—a person or business here or overseas, or a foreign government—can directly line the pockets of the US president simply by reserving rooms or renting out conference or banquet facilities at a Trump hotel. Since the inauguration, several foreign governments have rented space at the Trump hotel in Washington, DC, and foreign diplomats have reported being approached by Trump hotel staff soliciting business.

To address the emoluments issue, profits from these sort of transactions involving foreign governments are supposed to go to the US Treasury. But it’s hard to determine what counts as profit. And under the plan developed by Dillon, the calculation of profit would be made by the Trump Organization itself, without independent oversight. And there would be no auditing to ensure that all money from foreign governments was covered.

The pamphlet notes that the hotels should not calculate the profit from foreign patronage but rather estimate it. After all, it says, calculating the actual profit would take a lot of effort: “To attempt to individually track and distinctly attribute certain business-related costs as specifically identifiable to a particular customer group is not practical, nor would it even be possible without an inordinate amount of time, resources and specialists.”

The pamphlet presents a formula by which managers can estimate how much money should head to the US Treasury. In one example, a hotel that earned $10 million in revenue but had $8.5 million in expenses would be considered to have a profit of 15 percent. If it took in $500,000 from foreign governments, it should donate 15 percent of that revenue—that is, $75,000—to the US Treasury. (This basic formula does not take into account the complexities of actual transactions. For instance, what if a foreign government bought $1 million in services from a Trump hotel that was only breaking even? This would certainly benefit Trump, but none of these funds would end up being donated.)

When it comes to identifying foreign revenues, the pamphlet tells Trump hotel staff not to try too hard, for that could annoy the customers: “To fully and completely identify all patronage at our Properties by customer type is impractical in the service industry and putting forth a policy that requires all guests to identify themselves would impede upon personal privacy and diminish the guest experience of our brand.” So, the pamphlet points out, the Trump Organization will not try to identify customers who do not inform the hotel that they are representing a foreign government.

The pamphlet, which you can read in full below, was released by Democrats on the House Oversight Committee along with a letter sent to the Trump Organization on Wednesday morning. The letter, signed by Rep. Elijah Cummings, the senior Democrat on the committee, complained that the company had failed to fully explain how it would avoid violating the Emoluments Clause.

In the letter, Cummings scolded the Trump Organization for its seemingly lackadaisical approach. “This pamphlet raises grave concerns about the President’s refusal to comply with the Constitution merely because he believes it is ‘impractical’ and could ‘diminish the guest experience of our brand,'” he wrote. “Complying with the United States Constitution is not an option exercise but a requirement for serving as our nation’s President.”

A spokeswoman for the Trump Organization sent Mother Jones a brief statement, acknowledging receipt of the letter: “We have received and are in the process of reviewing the letter. We take these matters seriously and are fully committed to complying with all of our legal and ethical obligations.”