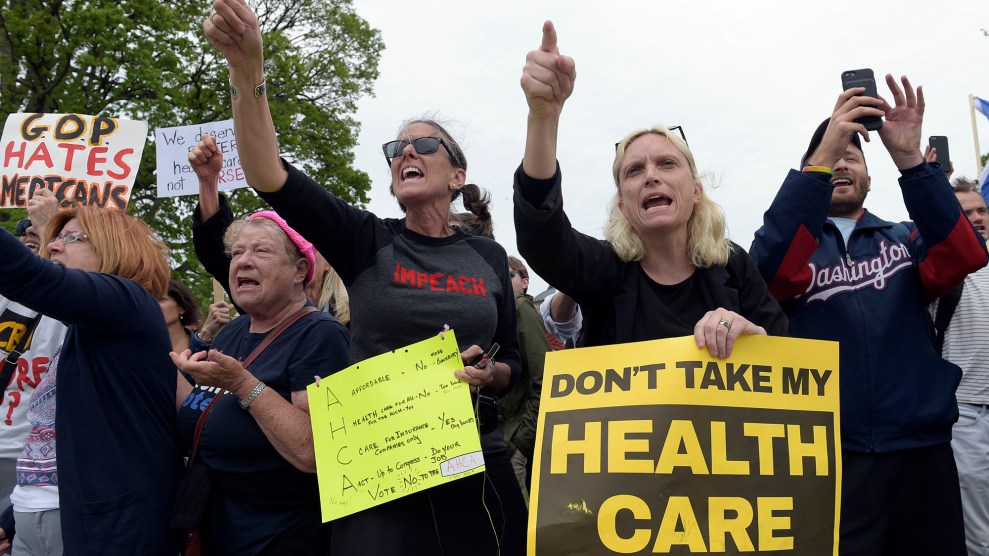 Republican Congressman Tom MacArthur found himself in front of a hostile crowd at a recent town hall event in his home district. His New Jersey constituents were particularly upset with the amendment MacArthur authored last month that finally convinced hardcore conservatives in the House to back the GOP’s bill to repeal Obamacare. That amendment allows states to opt out of the twin pillars of Obamacare’s consumer protections: the requirement that insurance companies cover certain health services and the prohibition on insurers charging higher premiums for people who have preexisting conditions. Together, these changes could make health care unaffordable for people who are sick; they could even make it impossible to get coverage for expensive medical problems.

Republicans are double-counting the money; they’ve already promised to use the vast majority of that $138 billion to fix other problems caused by the GOP bill.

Obamacare’s protections for people with preexisting conditions—things like cancer, asthma, or diabetes—are extremely popular. Republicans know this. In the months before MacArthur’s amendment, everyone from President Donald Trump to House Speaker Paul Ryan promised to maintain these protections. So when Republicans abruptly reversed course last month, they settled on a new talking point: The GOP bill, they insisted, would provide plenty of funding for so-call “high-risk pools” to make insurance affordable for sick Americans who might otherwise see their premiums skyrocket.

The issue came up at MacArthur’s town hall, when an attendee asked why she and her husband should be charged extra for preexisting conditions that they developed through no fault of their own. MacArthur assured the crowd, which had voiced support for the questioner, that he was working to protect people like her. “We’ve set aside monies that don’t exist today,” MacArthur said, “$138 billion is for the exact people that you’re concerned about.”

MacArthur wasn’t telling the truth. The Republican health plan is pretty complicated, but one thing is certain: It doesn’t contain anywhere near $138 billion dedicated to offsetting higher costs for people with preexisting conditions.

MacArthur isn’t the only Republican making this claim. The exact number cited by lawmakers sometimes varies—Rep. Doug Collins (R-Ga.) said on the House floor that $108 billion would be available—but the party’s overall message has been clear: Don’t worry about skyrocketing costs for sick people, because those people will be able to sign up for government-subsidized high-risk pools.

There are a number of problems with this argument. First, the idea isn’t new. Thirty-five states tried some form of high-risk pool prior to Obamacare, with less than stellar results. Consumers often faced far higher premiums, lifetime caps, and sometimes exclusions on paying for the preexisting condition that made them uninsurable in the first place.

Second, while $138 billion may seem like a lot of money, it’s important to keep in mind that those funds would be spread out over an entire decade—on average, that works out to less than $14 billion per year. Even if all of that money were used to fund high-risk pools (which it won’t be), it would fall far short of what experts think such a program would cost at a national level. The liberal Center for American Progress calculated that a functioning high-risk pool—covering 5 percent of the individual and small-group insurance markets—would cost $327 billion over the next decade, far more than Republicans claim is included in their bill.

Even worse, MacArthur and his colleagues are double-counting the money; they’ve already promised to use the vast majority of that $138 billion to fix other problems caused by the GOP bill. Only a tiny sliver of the funds—$8 billion over five years—is expressly dedicated to helping people with preexisting conditions buy insurance if they’re charged extra.

Policy wonks have noticed the issue and are quick to point out that Republicans can’t actually spend the same money on multiple things. “It’s pretty clear that it can’t solve all of these problems,” says Edwin Park of the liberal-leaning Center for Budget and Policy Priorities. “It can solve maybe one of these problems.”

To understand the problems with MacArthur’s $138 billion talking point, it helps to revisit the history of how the GOP health care bill got through the House. When the plan was first introduced back in March, the bill left Obamacare’s preexisting condition protections intact. MacArthur’s amendment rolling back those protections wasn’t made public until late April. The vast majority of the money in question—$130 billion of it—was included in the bill before MacArthur’s amendment even existed. In other words, that money clearly wasn’t intended to help offset higher rates for people with preexisting conditions, because it was included in the bill before the problem even existed.

So what is all that money supposed to be used for? Of the $138 billion cited by MacArthur, $15 billion is earmarked not for general preexisting coverage, but to help people obtain maternity, mental health, and substance abuse coverage.

Another $15 billion was added in a separate amendment to help states set up “invisible high-risk pools” modeled after a program that Maine tried, which allowed insurance companies to pass some of the costs for the sickest patients to the government. But a key part of Maine’s program was that it was, well, invisible—people with preexisting conditions bought insurance at the same price and in the same way as everyone else. For the person buying insurance, everything operated the way it does now under Obamacare. In other words, this “invisible” program wasn’t really a high-risk pool at all; instead, it was essentially an accounting mechanism for the insurance companies. Allowing insurance companies to charge higher premiums for sick people—as the GOP bill would do—defeats the entire point of how Maine’s system operated.

The largest chunck of the money—$100 billion—that is supposedly going to help people with preexisting conditions comes from a general pool of cash that the GOP bill terms the “stability fund.” There aren’t many restrictions on how this money can be used, so states could theoretically spend it all on high-risk pools if they wanted to. But this fund was written into the bill more than a month before MacArthur proposed scrapping the preexisting condition protections, and it was actually intended to solve a hodgepodge of other problems that repealing Obamacare will create. In fact, that stability fund’s stated purpose has nothing to fund high-risk pools. Back in March, the authors of the repeal bill put out a press release suggesting that states could use the fund to help lower costs for low- and middle-income people and older Americans—groups that would otherwise pay more for insurance under the GOP bill. The press release makes no mention of preexisting conditions.

Republicans have suggested states could use the stability fund for a ton of other purposes, too. They’ve said it could be used to pay insurance companies to continue offering coverage in certain regions. Or states might use it to lower everyone’s deductibles, or to expand dental and vision insurance. When the Congressional Budget Office examined the bill in March, it assumed that states would primarily use the money to help lower insurance premiums across the board to get more people onto the markets. Regardless, states have nearly complete discretion over how the money would be used. “There was no guarantee that it would be used by states appropriately, or used by states efficiently to even meet the purposes that were listed,” says Park.

There are other obstacles, as well, when it comes to funding high-risk pools. As Timothy Jost, an emeritus professor at Washington and Lee University School of Law, notes at Health Affairs, if a state doesn’t submit a plan for how it intends to use the stability pool funding, that money wouldn’t go into setting up a high-risk pool. Rather, it would pay for a reinsurance program set up by the federal government. Reinsurance programs reimburse insurance companies if they end up having to spend more money on health care claims than they expect. In general, that does help lower premiums for everyone by offsetting the costs of the most expensive people to insure. But without Obamacare’s preexisting condition protections, it wouldn’t necessarily lead to lower costs for the sickest people.

That brings us to the final $8 billion—the only money in the GOP’s $138 billion talking point that actually is dedicated to high-risk pools. This money was added to bill after Republican adopted MacArthur’s proposal to allow states to opt out of preexisting condition protections. The MacArthur Amendment made some mainstream Republicans so nervous that they threatened to kill the bill entirely. “I’m not at all comfortable with removing that protection,” said Rep. Fred Upton (R-Mich.), whose defection was particularly notable because he’d previously been one of the leaders of the effort to repeal Obamacare.

But Upton’s principled stand was short-lived. He agreed to support the bill once again in exchange for a separate amendment that provides just $8 billion over five years to set up high-risk pools in states that choose to allow insurers to charge sick people more. After 2023, that fund would dry up unless Congress decides to pass a new bill. And then that’s it. There’s no other money expressly designated for traditional high-risk pools. And the rest of the money from the state stability pool is only appropriated through 2026, at which point states will be on their own. Of course, the ability for insurance companies to charge extra for preexisting conditions would remain in place—even after the money to help those people has disappeared.

Some Republicans have argued that despite the MacArthur amendment, states probably won’t choose to get rid of the protections in Obamacare. “I think at the end of the day, it’s very unlikely that any governor of any state will remove the pre-existing conditions clause,” said Rep. Tom Cole (R-Okla.), a member of the House leadership team, in an interview with NPR. But there’s no particular reason to think that’s true. Republicans in 19 states have blocked participation in the Obamacare Medicaid expansion, often in the face of overwhelming public pressure. Wisconsin governor Scott Walker has already said that he’d be open to seeking one of these waivers if the Republican bill becomes law (though he later walked back that stance).

Cole also insisted that the House bill contains “all sorts of very stringent conditions” that states would have to meet before receiving a waiver from the federal government to opt out of the preexisting condition protections. But in reality, the bar is extremely low. To obtain a waiver, a state only needs to show that its plan might lower premiums overall (which would probably happen once sick people could no longer afford to buy insurance) or help stabilize the number of insurers selling policies. The onus would be on the the Trump administration’s Department of Health and Human Services to justify turning down these waivers; otherwise they would automatically go into effect.

“Essentially,” Jost writes, “any state that wanted a waiver would get one.”