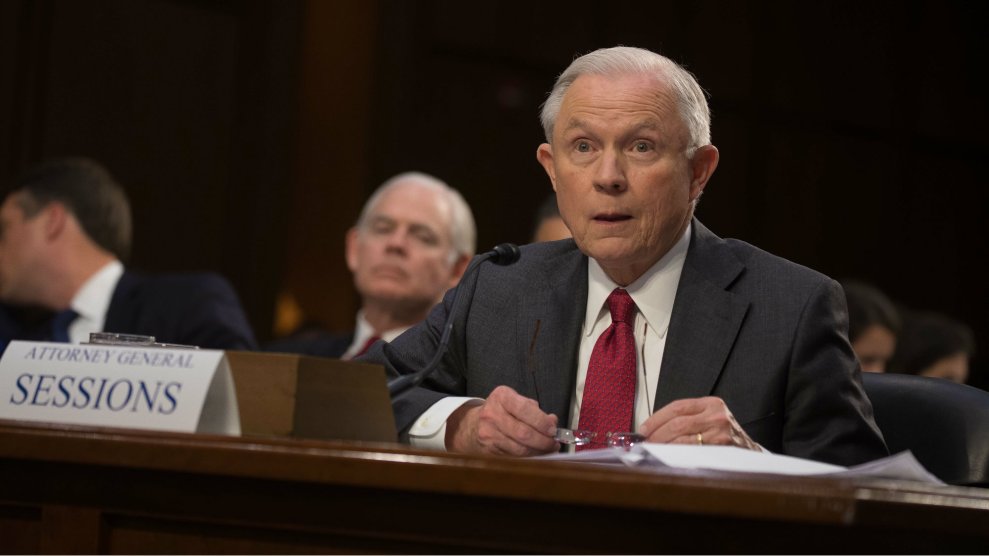 Democrats on two House committees want the Justice Department’s internal watchdog to investigate whether Attorney General Jeff Sessions violated his pledge to recuse himself from any investigations into the 2016 election when he participated in the firing of FBI Director James Comey. Comey had been in charge of the FBI’s investigation into Russian interference in the election and potential coordination between associates of Donald Trump and the Kremlin.

“The actions of Attorney General Sessions in collaborating directly with President Trump to fire Director Comey reflect a lapse in judgment by our nation’s top law enforcement official and appear to violate multiple promises made by the Attorney General and his aides,” says the letter sent Thursday to DOJ Inspector General Michael Horowitz. It was signed by Democrats on the judiciary and oversight committees.

“The actions of Attorney General Sessions…reflect a lapse in judgment by our nation’s top law enforcement official and appear to violate multiple promises made by the Attorney General and his aides.”

Horowitz’s office may already be looking into the matter. The IG’s office said in January that it is looking into Comey’s actions in the investigation into Hillary Clinton’s handling of her email while she was Secretary of State. That IG probe includes Comey’s decision to hold a press conference last year detailing why he did not believe believe Clinton should face charges and his October 28 letter to members of Congress—sent just days before the presidential election—announcing that the FBI had reopened the Clinton investigation.

The IG’s office has not commented further on that probe or said if it is looking into the actions of Sessions and other DOJ officials related Comey’s firing. But the January announcement noted the office “will consider including” in the probe “other issues that may arise during the course of the review,” suggesting Sessions’ role in Comey’s ouster may already be part of the probe.

Other lawmakers, including Sens. Elizabeth Warren (D-Ma.) and Martin Heinrich (D-N.M.) have already asked Horowitz to look into Sessions’ recusal. But Thursday’s letter, signed by 35 House members, adds pressure for the IG to weigh in on the attorney general’s conduct.

On March 2, Sessions announced that he would recuse himself from any “existing or future investigations of any matters related in any way to the campaigns for President of the United States.”

The announcement came after news broke that Sessions, who was a leading Trump supporter and confidante during the campaign, had falsely told the Senate Judiciary Committee that he had not had contact with Russian officials during the election contest.

Sessions this month provided a narrow interpretation of that recusal promise.

“I do not believe that it is a sound position to say that, if you’re recused for a single case involving any one of the great agencies like DEA or US Marshals or ATF that are part of the Department of Justice, you can’t make a decision about the leadership in that agency,” Sessions told the Senate intelligence committee at a June 13 hearing.

Trump has suggested his firing of Comey was at least partly related to the Russia investigation. Sessions’ role in the matter included signing off on a letter by Deputy Attorney General Rod Rosenstein making a case for firing Comey based on his handling of the Clinton investigation.

The Democrats’ letter says that by broadly rescuing himself from any matters related to the 2016 campaign, Sessions made it irrelevant why Comey was fired.

“Both matters were supposed to be off limits for the Attorney General,” they write.

The letter says they are turning to the IG because the DOJ has failed to respond to inquires about the recusal.

The Democrats cite a law that bars DOJ officials from participating in any investigation which poses a personal, financial, or political conflict of interest. Penalties for violation include termination.

“We ask that your office also provide recommendations you determine are warranted relating to the department’s processes for handling recusals and its administrative procedures for handling related disciplinary actions,” they write.