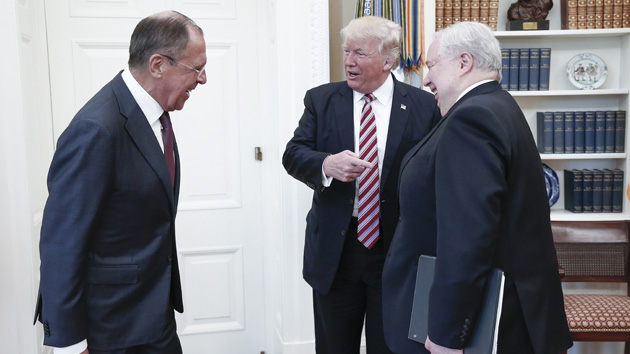 Trump meeting with top Russian officials in the Oval Office on May 10.Alexander Shcherbak/TASS via ZUMA

Whether or not Donald Trump’s campaign colluded in any way with the Kremlin to interfere in the 2016 presidential election remains an open question. Yet the Trump White House and the Kremlin do at times seem to share an approach to spreading misinformation and undermining confidence in news reports.

From Trump’s many denouncements of “fake news” to his defiant claims that the multiple ongoing Russia investigations are “a hoax” and a waste of taxpayer money, “a lot of the language is about creating doubt and question marks,” says Erik Nisbet, an associate professor of communications at Ohio State University who studies electoral and Russian disinformation. Nisbet describes the strategy as an “authoritarian, post-truth approach” whose overarching goal “is to diminish the ability of the media to be the Fourth Estate and hold Trump accountable.”

Putin has actively delegitimized the Russian media for years. In the United States, Nisbet’s research after the election found, “Those who buy into the concept that the mainstream media are out to get Trump are more likely to buy into fake news.”

As Trump and his associates have run with false stories stemming from Russian media outlets, Putin’s government appears to have taken pains to echo messaging coming from the White House—perhaps in an attempt to play to the upheaval over the Russia scandal and sow further doubts and division among the American public. Here are some prime examples:

Repeated assertions about a “witch hunt”: Trump has repeatedly taken to Twitter to call the investigation into Russian election interference a “witch hunt,” including again in recent days: “I am being investigated for firing the FBI Director by the man who told me to fire the FBI Director! Witch Hunt,” he wrote on June 16. This has been a go-to phrase for Kremlin officials as well: When Attorney General Jeff Sessions recused himself in early March because he had not disclosed meetings with the Russian ambassador, Trump accused Democrats of leading “a total witch hunt.” Russian Foreign Minister Sergey Lavrov then said the pressure on Sessions “strongly resembles a witch hunt or the times of McCarthyism, which we thought were long over in the United States as a civilized country.” In January, when top US intelligence officials concurred on Russian interference in the election, Trump told the New York Times that the focus on Russia was “a political witch hunt.” Kremlin spokesman Dmitry Peskov responded to the report: “It truly is reminiscent of a witch hunt.”

Talk of private-citizen hackers: Putin at first repeatedly insisted that Russia did not interfere in the US election, but more recently he changed his message conspicuously, acknowledging that the hacking may have been executed by “patriotically minded” Russians. In a June 2 interview with NBC’s Megyn Kelly, he said, “Hackers can be anywhere.” His characterizations of private-citizen hackers as possibly “a child,” or “artists” who choose targets based on how they feel “when they wake up in the morning,” evoked Trump’s earlier statements that the attacks on the Democratic National Committee could have been carried out by “somebody sitting on their bed that weighs 400 pounds.”

Attempts to discredit election interference: At a press conference this spring, Putin dismissed allegations that Russia interfered in US elections as  “rumors used in an American domestic political battle.” And on NBC, when Kelly pointed out that US intelligence agencies had concluded that Russia was behind the election hacks, Putin said they were “misled.” Trump has repeatedly discounted intelligence agencies’ findings on Russian interference, blaming the Democrats for spreading the story because they are “sore losers.” In March, Trump tweeted, “The Democrats made up and pushed the Russian story as an excuse for running a terrible campaign.”

A notable change on climate change: Putin has even changed his tune on climate change—aligning himself more closely with Trump (who has himself changed positions over the years). In 2015, Putin told a Paris audience that “climate change has become one of the most serious challenges facing humanity.” But this spring—soon after the White House announced that Trump was considering pulling the United States out of the Paris climate accord—Putin told a Russian audience:, “The warming had already started by the 1930s. That’s when there were no such anthropological factors, such emissions, and the warming had already started.” On June 1, Trump announced he would withdraw from the agreement. Putin’s response to Trump’s move: “Don’t worry, be happy.”

Hammering away at “fake news”: Since being sworn in as president, Trump has lashed out at the media scores of times, emphasizing recently, “Fake News is at an all time high!” In May, Russian Foreign Ministry spokeswoman Maria Zakharova picked up on the theme, calling news that Trump had shared classified information with Russians in the Oval Office “the latest fake.” She wrote on Facebook, “Guys, you are again reading American newspapers? You should not read them. They can be used in various ways, but there’s no need to read them—lately, this is not only harmful, but dangerous.” In Putin’s one-on-one with NBC’s Kelly, he scoffed at American media coverage of contact between Trump associates and Russian officials, claiming that the reported meetings never happened: “You people are so creative,” Putin said.