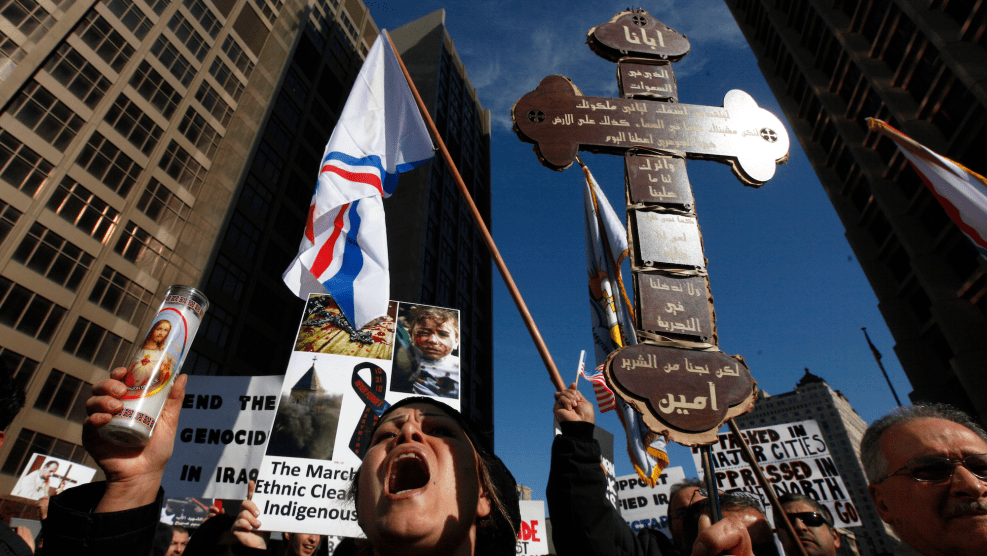 Chaldeans in Michigan rally following a 2010 attack on an Iraqi church that left 58 people dead.Paul Sancya/AP

When Donald Trump won Michigan by 10,704 votes, it was with support from many Iraqi Catholics living in the state. These Iraqis, known as Chaldeans, were energized by Trump’s promise to eradicate ISIS and end its persecution of Christians. But on June 11, Chaldeans learned that they’d also become a target.

In a series of raids, US Immigration and Customs Enforcement arrested more than 100 Iraqis in Michigan. On Thursday night, a federal judge temporarily blocked the government from deporting them to a destabilized Iraq, where they might face torture and death. But their future remains uncertain.

The Iraqis in detention owe their misfortune to Trump’s travel ban. For decades, Iraq refused to accept Iraqi nationals whom the United States wanted to deport, creating a 1,444-person backlog of Iraqis slated for removal. Iraq was among the seven countries whose citizens were barred from entering the United States in Trump’s first travel ban. In exchange for getting off the list in Trump’s revised ban, Iraq agreed to let these nationals be sent back, even though some speak neither Arabic nor the Aramaic spoken by Chaldeans in Iraq.

During the campaign, the 121,000 Chaldeans in the Detroit area—the largest population outside Iraq—didn’t see that deal coming. Fleeing persecution, Chaldeans, a Catholic population indigenous to Iraq, started arriving in Michigan about 100 years ago. More genocidal campaigns and exoduses followed, says Nadine Yousif Kalasho, the Chaldean founder of CODE Legal Aid, which is helping the detained Iraqis find lawyers.

Most recently, Chaldeans have been the victim of what former Secretary of State John Kerry called an ISIS-led genocide against Christians, Yazidis, and Shiites. Iraq’s Chaldean population, Yousif says, has dropped by more than 80 percent since 2003.

Given that history, it’s not hard to see why Chaldeans cheered Trump’s pledge to destroy ISIS for “hunting down and exterminating” Christians. In September, Nash Gabrail wrote in the Chaldean News that “When [Trump] talks about limiting immigration from the violent Middle East countries, he only talks about Muslims coming from there.” After Trump won, Martin Manna, the president of the Chaldean American Chamber of Commerce, said, “Our community voted like it never has.” Balsam Kinaia, a Chaldean-American who owns a cell phone store in Detroit, says he voted for Trump in part because he thinks Barack Obama did nothing to protect Christians in the Middle East.

Following the ICE raids, Chaldeans’ hope was replaced with fear and panic. Yousif’s legal clinic has been overwhelmed by Iraqi-Americans who are concerned about whether they could be next. Many of them have green cards and have nothing to fear, she says.

Rebecca Adducci, an ICE official in Detroit, said that ICE addressed a “very real public safety threat” by arresting Iraqis with criminal records. One detainee is a convicted murderer who was once known as the “godfather of the Chaldean mafia.”

But the criminal records of the petitioners in the American Civil Liberties Union of Michigan’s class-action lawsuit tell a different story. Usama “Sam” Hamama, for example, came to the United States as a refugee when he was four years old and now has four children who are US citizens. Twenty-eight years ago, Hamama was convicted of felony assault. After receiving a final order of removal in 1994, he was let out under supervision and avoided legal trouble. All of the other roughly 100 petitioners have also lived under ICE supervision and followed the law since receiving their deportation orders, according to the Michigan ACLU’s complaint.

On Wednesday, the government argued before an overflowing courtroom that the District Court for the Eastern District of Michigan has no jurisdiction, a claim that District Court Judge Mark Goldsmith will review during the two-week deportation pause he ordered on Thursday. ICE’s lawyers also argue that individual detainees can make their case before the Board of Immigration Appeals, and an appeals court after that.

Michael Steinberg, the ACLU of Michigan’s legal director, says there are a number of problems with the government’s argument. Logistically, he says, it’s difficult to provide counsel for individual appeals because detainees have been transferred to detention centers as far away as Phoenix.  More important, he argues that deporting the detained Iraqis is illegal. Under US law, individuals can’t be sent to countries where they are likely to face torture or persecution. Steinberg and many Chaldeans argue that sending Catholics, Kurds, and Iraqis who identify as American back to Iraq would be an effective death sentence. Kinaia says the arrested Iraqis, some of whom he knows, are better off being executed than deported, because “at least they could be buried here.”

Steinberg has never worked a death penalty case because capital punishment is illegal in Michigan. “But this is as close as I’ve come,” he says. “There’s great fear and panic within the community that their loved ones are going to be sent back to Iraq to be killed.”

Two days before the election, as Trump made his final pitch to voters, he spoke at a rally in the county that inspired the term “Reagan Democrats.” The town was Sterling Heights, a suburb that is home to thousands of Chaldeans.

A group of 12-year-olds outside a Chaldean church was thrilled to learn that Trump was coming to town, the Washington Post reported. “Most of us want Donald Trump to win because he can defeat ISIS and let us go back to our countries,” said Ray Poles, whose family had recently emigrated from Iraq.

Seven months later, ICE came to Sterling Heights. The mood changed quickly.  “Once the big raid took place on Sunday,” Yousif says, “that entire area was like a ghost town.”

Kinaia, who soured on Trump before the arrests, doesn’t think Trump understood that the the travel ban deal would affect Christians. But now that Chaldeans have been arrested, he believes Trump sees them as “collateral damage” in an effort to shore up his conservative base. Still, he can’t grasp the logic of the move. “The whole deal with [Iraq] made no sense,” he says. “There was no point in it. Why break one of your promises for no reason? There’s no reason for it.”

Update 6/27: On Monday, Judge Goldsmith extended his stay nationwide, preventing the government from deporting any Iraqis back to Iraq for two weeks.