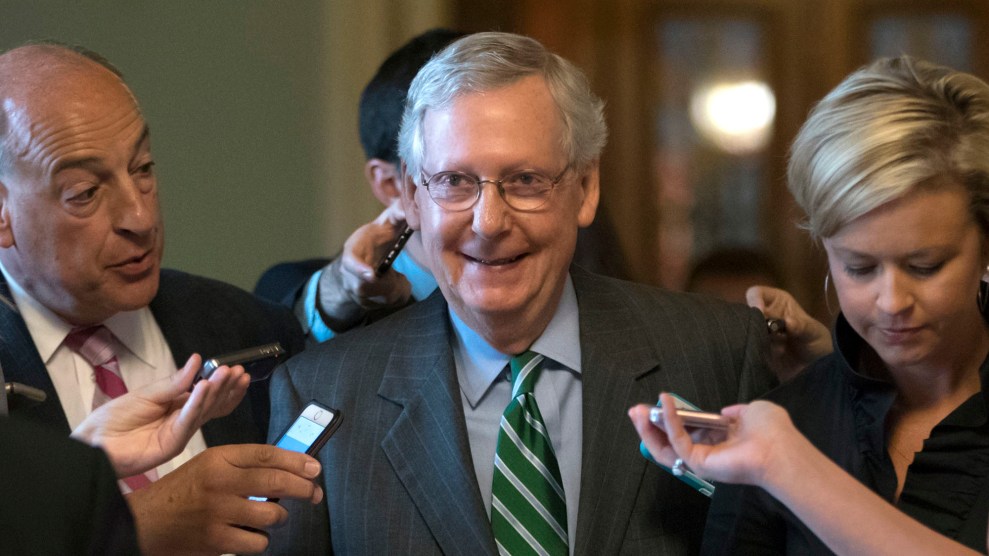 Senate Majority Leader Mitch McConnell smiles as he leaves the chamber after announcing the release of the Republicans' health care bill.J. Scott Applewhite/AP

The stats on the Senate health care bill are in: The Republicans’ new plan to repeal Obamacare would leave 22 million more people uninsured in 2026 than under current law. That’s according to a new analysis by the Congressional Budget Office, the official scorekeeper for Congress, which also predicts that the federal government would spend $772 billion less on Medicaid over the next decade.

Senate Republicans kept the bill secret until last Thursday, but they are nonetheless rushing forward with a plan to vote on it by the end of this week so they can wrap things up before they head home for the Fourth of July. In a nearly unprecedented move, the entire drafting of the bill happened behind closed doors, with zero public hearings. Senate Majority Leader Mitch McConnell (R-Ky.) hopes that the accelerated schedule will help his members pass the controversial legislation before they are confronted by angry voters in their home states over the holiday recess. That could prove tricky, though, as a bloc of far-right conservative senators have said the bill doesn’t go far enough in undoing Obamacare. At the same time, the GOP leadership has encountered resistance from some of the more moderate Republicans—most notably, Nevada Sen. Dean Heller, who is up for reelection next year.

House Republicans passed a similar bill in early May, which the CBO estimated would leave 23 million people uninsured. The Senate bill isn’t exactly the same—it uses a different mechanism to allow states to duck out of covering essential health benefits, and it has a different form of subsidies. But the core of both bills are the same: large tax cuts to the wealthiest Americans and the health industry, paid for by massive reductions to Medicaid, the governmental program that provides health insurance to poor Americans and long-term care to the elderly.

The Senate’s bill could wreak havoc on the Obamacare marketplaces for people who need to buy individual insurance. Currently, insurance companies can’t charge their oldest enrollees more than three times as much as the youngest. The GOP bill changes that ratio to 5:1, jacking up premiums for older Americans. Obamacare currently offers subsidies to help offset monthly premiums for people earning up to 400 percent of the poverty level; the GOP bill would lower that threshold to 350 percent.

Under Obamacare, moreover, those subsidies are currently intended to help people buy so-called silver plans, which cover 70 percent of patients’ out-of-pocket costs. The Republican bill would lower those subsidies so that they pay for skimpier plans, with insurance companies now covering just 58 percent of out-of-pocket costs under the new subsidy formula. The bottom line: Deductibles would skyrocket.

The GOP bill—which was drafted by a working group made up entirely of men—would bar Planned Parenthood for a year from receiving any Medicaid funding to reimburse the organization for nonabortion services it provides to Medicaid patients. (Federal Medicaid funds are already prohibited form being used for most abortions.) The bill would also block subsidies from going to insurance plans that include abortion coverage.

But the bill would make even more significant changes to Medicaid. Obamacare attempted to expand Medicaid coverage to everyone who makes up to 138 percent of the poverty level (though 19 states have refused to adopt that expansion). Seventy-four million people nationwide now receive health coverage through the Medicaid program, with 11 million of those covered under the Medicaid expansion. The Senate bill would roll back most of the federal funding for the expansion by 2024.

But the legislation goes far beyond ending Obamacare’s Medicaid revisions. The Senate would impose a cap on federal Medicaid spending—ending the program’s promise to offer states funding for anyone who qualifies for the program. While those spending caps would rise over time, the bill pegs that rate to inflation, which experts warn will grow at a slower pace than the medical costs incurred by people currently on Medicaid. As federal funding increasingly falls behind spending demands over time, states would be faced with difficult choices: raising state-level spending on Medicaid, or kicking people off the program and rolling back coverage.