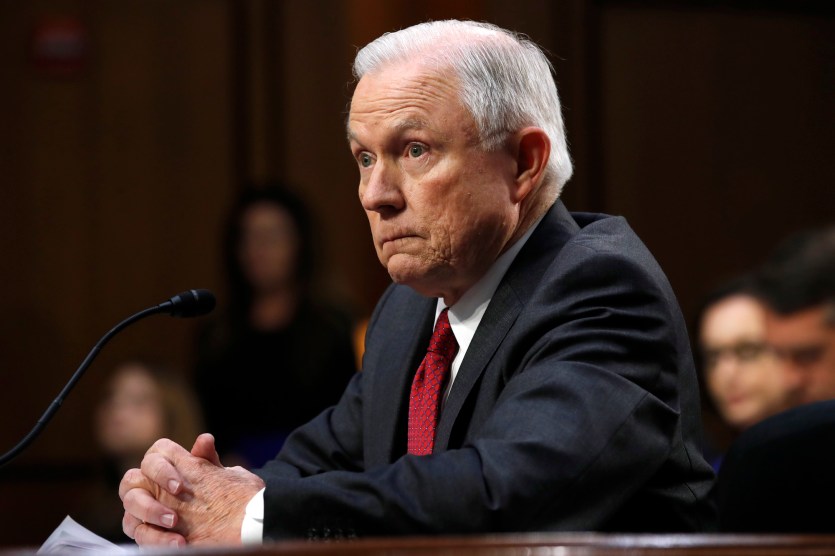 Attorney General Jeff Session’s appearance before the Senate Intelligence Committee did not produce the revelations yielded by former FBI Director Jim Comey’s recent star turn on Capitol Hill. This was largely because Sessions declined to discuss his conversations with President Donald Trump about Trump’s decision to fire Comey. Sessions also would not say anything about any conversations he had with Trump regarding the Russia investigation.

Several senators—Democrats and independent Angus King—accused Sessions of stonewalling and pressed him on his refusal to answer questions about his interactions with Trump. They repeatedly asked: Was he honoring a request by Trump to evoke executive privilege? No, Sessions replied. So how could he not answer their queries? Sessions explained that he was adhering to a Justice Department tradition and that he wanted to preserve the president’s ability to evoke executive privilege.

Sessions was essentially saying he was keeping mum to protect Trump’s ability to assert a privilege that Trump had decided (so far) not to assert. These senators howled in protest. “You are impeding this investigation….You are obstructing that congressional investigation by not answering questions,” Sen. Martin Heinrich (D-N.M.) exclaimed. But Sessions’ stance succeeded in preventing new disclosures about Trump’s dismissal of Comey and contacts between Trump and the Justice Department about the Russia probe.

The implication was clear: Trump and his national security team had not extensively discussed—if they had discussed at all—the Russian assault against the United States.

In between this tussling, there were a few interesting moments. Sessions said he had confidence in special counsel Robert Mueller. He also noted that it wouldn’t be appropriate for him to fire Mueller, as was reportedly under consideration by Trump. But there was something of a shocking exchange that came toward the end of the hearing.

Sen. Joe Manchin (D-W.V.) asked about Russian President Vladimir Putin’s covert operation to subvert the 2016 election: “Prior to [the president being inaugurated]—in the campaign up until through the transition—was there ever any meetings that [Trump] showed any concern or consideration or just inquisitive of what the Russians were doing and if they really had done it?”

Sessions replied, “I don’t recall any such conversation. I’m not sure I understood your question. Maybe I better listen again.”

Manchin had picked the right guy to ask this question: Sessions chaired the Trump campaign’s national security advisory committee, and he was a key adviser to Trump during the transition period (and Trump’s designated AG pick). Presumably, Sessions would know if Trump, before or after the election, was seriously examining the Russian attack on the 2016 election.

Machin continued: “You were part of the national security team, so if [Trump] would’ve heard something about Russia with their capabilities or concern about what they could do to our election process. Was there ever any conversations concerning that whatsoever?”

Sessions answered, “I don’t recall it.”

The implication was clear: Trump and his national security team had not extensively discussed—if they had discussed at all—the Russian assault against the United States. This was a damning admission from Sessions.

Moments earlier, Sessions had a similarly troubling back-and-forth with King. In response to a King question about whether Sessions had sought information on the Russia secret operation to undermine the election, Sessions remarked, “I know nothing but what I’ve read in the paper. I’ve never received any detailed briefing on how a hacking occurred or how information was alleged to have influenced the campaign.” An incredulous King inquired, “Before the inauguration, you never sought any information about this rather dramatic attack on our country?” Sessions said he had not. And then this exchange occurred:

Sessions: You might have been very critical of me if I, as an active part of the campaign, was seeking intelligence relating to something that might be relevant to the campaign. I’m not sure that would’ve been—

Sessions: No I don’t believe I ever did.

So the person picked to be attorney general—one of the chief national security officials in the US government—had not bothered to educate himself about the Russian operation. He had not even read the public report issued by the intelligence community. This seemed a strong indication that the Trump camp really didn’t give a damn about Putin’s clandestine effort to undermine American democracy.

In the final moments of the hearing, Sessions admitted that the Trump administration did not have “an effective strategy” to counter cyber threats to the United States. Having asserted that neither he nor Trump had demonstrated any interest in the Russian hacking attack, this statement was hardly a surprise.