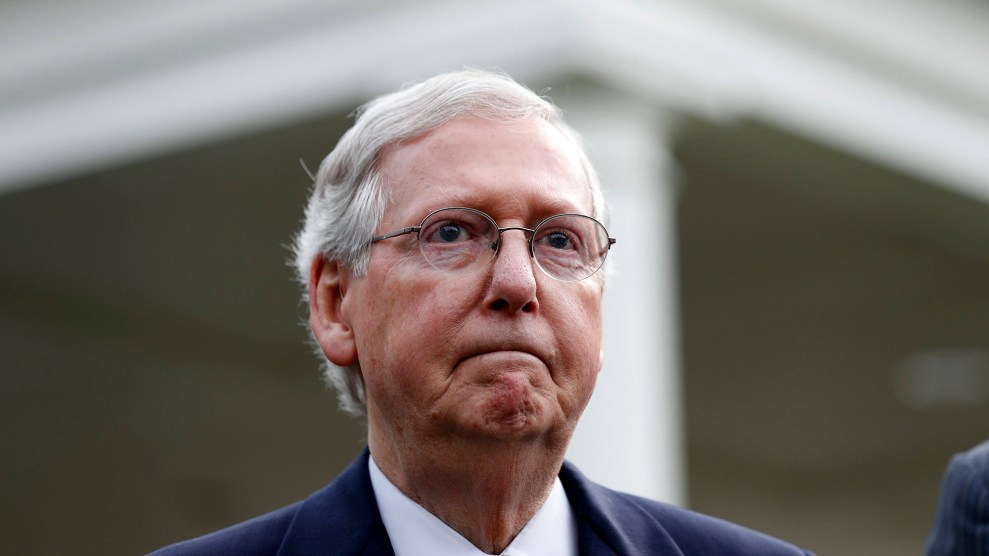 When the Congressional Budget Office revealed on Monday that a Republican health care bill would leave 22 million more people without insurance, the public backlash forced GOP leaders to cancel a Senate vote. On Thursday, things got worse. The CBO released another report, this time making clear that the bill would lead to billions of dollars in additional cuts—and, presumably, millions more people without insurance—that hadn’t been included in its additional study.

The GOP legislation is usually described as an effort to repeal and replace Obamacare. But the most drastic changes in the various House and Senate versions of the bill actually involve Medicaid, a government program that has existed since 1965 and insures 74 million Americans.

By 2036, Medicaid funding under the Senate bill would be 35 percent below what it would be under current law.

The bill unveiled last week by Senate Republicans would make especially dramatic cuts to Medicaid. On Monday the CBO estimated that under that bill, the federal government would spend $772 billion less on Medicaid over the next 10 years than it would under current law. In 2026, that would result in 15 million fewer people getting coverage through Medicaid and a 26 percent decrease in Medicaid spending.

But what’s most astonishing is that thanks to a quirk of how the CBO analyzes legislation, the agency’s scoring of the bill actually understated the devastation that it would cause to Medicaid. That’s because the CBO generally only looks at a 10-year window; it didn’t examine what would happen after 2026. And as it turns out, the biggest cuts to Medicaid proposed by the GOP bill would hit in 2025, with effects that will compound over time.

On Thursday afternoon, the CBO released a second report—and this time it analyzed the bill’s impact over a 20-year period. The agency predicts that by 2036, Medicaid funding under the Senate bill would be 35 percent below what it would be under current law. Citing the difficulty in making predictions far into the future, the CBO did not estimate the number of people who would lose Medicaid coverage thanks to the 35 percent dip in spending. It’s safe to assume that number would be sizable.

The GOP legislation would cut Medicaid in several different ways. Beginning in 2020, the Senate bill would wind down Obamacare’s expansion of Medicaid to families and individuals earning up to 138 percent of the poverty level. The federal government pays 90 percent of the costs for these people, with the states paying the other 10 percent. The Senate bill would incrementally decrease that, so that by 2024, states would only be reimbursed at the traditional (much lower) Medicaid rate for people who joined under expansion.

Despite 19 states refusing to adopt Medicaid expansion, 11 million people have gained insurance through this provision. All of them would be at risk if the federal government starts dialing back funds. A number of states have trigger policies that would automatically end expansion as soon as the reimbursement rate dropped, and the rest of the states would likely roll back their expansion programs as funding decreased. The liberal-leaning Center for Budget and Policy Priorities estimates that states would need to spend an extra $43 billion in 2024 if they want to maintain their programs under the Senate bill.

The legislation would also shift the traditional Medicaid program to a per capita funding scheme. Since it’s inception five decades ago, the federal government has run Medicaid as an open promise to the states: The feds would reimburse states for a set percentage of all costs incurred. Under the Senate bill, that promise would be broken starting in 2020; states would instead receive a set dollar figure per person covered by Medicaid, regardless of how much those people consume in medical services. That amount would only increase at the rate of inflation, which experts say would quickly fall behind the actual costs of health care.

“That difference likely amounts to hundreds of billions of dollars of additional federal cuts in the subsequent decade.”

At first, the change wouldn’t be cataclysmic. The per capita number is set to current spending levels, so for most states the set amount should roughly correspond with their costs. But over time, the gap between how much states receive and how much they spend would grow. And the Senate bill would actually be worse for the long-term future of Medicaid than the bill that House Republicans passed in early May.

It all comes down to how exactly the bill measures inflation. From 2020 to 2024, the Senate would follow the House’s definition of inflation, the Consumer Price Index-medical. CPI-M is a government calculation that is meant to capture the rate of increase of medical spending, but it actually falls short of the amount needed to keep up with the cost of Medicaid. An analysis by the Brookings Institution calculated that, if Medicaid had been capped at CPI-M in 2000, by 2011 states would have needed to find an additional $17.8 billion to maintain benefit levels, an 11 percent increase.

But the House and Senate bills diverge starting in 2025. That’s when the Senate bill would switch to the general inflation calculation, known as CPI-U. That’s a much slower inflation rate, one that is projected to lag behind CPI-M by 1.3 percent each year over the next decade. “This change would ensure a shortfall between federal Medicaid payments and projected Medicaid costs that will grow over time,” the Urban Institute’s Matthew Buettgens writes.

“Estimates suggest that the long-run cuts to Medicaid from a per capita cap indexed to general inflation, as under the Senate bill, could be several times larger or more than those under the House cap,” CBPP’s Jacob Leibenluft wrote last week. “That difference likely amounts to hundreds of billions of dollars of additional federal cuts in the subsequent decade.”

The new CBO report confirms those expectations. But without a full analysis, it’s hard to say exactly how many people would lose out on health insurance thanks to the 35 percent drop in Medicaid spending. That number certainly won’t be small.