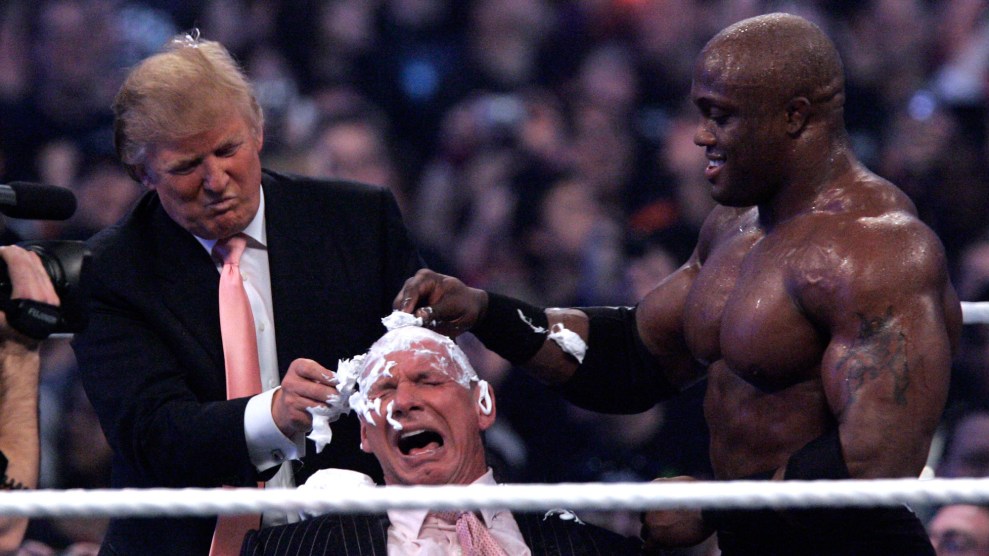 By now, you’ve probably seen the video that Donald Trump tweeted out over the weekend—the one of him pummeling a man with a CNN logo plastered over his face—which more than a few Americans have interpreted as the president of the United States actually promoting violence against the media.

The footage came from a time when Trump was not POTUS, but just another character in a World Wrestling Entertainment storyline. WWE cofounder Vince McMahon, the recipient of the controversial bodyslam and flurry of surprisingly real punches seen in the video, has known Trump for decades. Shortly after the election, Trump tapped Vince’s wife and fellow cofounder, Linda McMahon—who served as WWE’s president and chief executive and has mounted two unsuccessful bids for a Connecticut US Senate seat—to lead the Small Business Administration.

Trump’s relationship with the wrestling world goes back to 1998, when Trump Plaza in Atlantic City first hosted the WWE’s annual spectacle, Wrestlemania. Trump has since been listed as one of the organization’s “superstars” and inducted into its Hall of Fame, where he is now the first inductee to “ever hold the distinguished title of US Commander-in-Chief.” Here are a few notable moments from Trump’s wrestling sideshow:

Spectator Trump: In 2004, former Minnesota governor and veteran pro wrestler Jesse “The Body” Ventura took to the ring at Wrestlemania XX and singled out Trump for an interview. After Trump offered his assurance that Ventura would have “100 percent” of his “moral and financial support” should the wrestler re-enter politics, announcers Jerry “The King” Lawler and Jim Ross speculated about Ventura in the White House with Trump as his vice president. “I think that we may need a wrestler in the White House in 2008,” Ventura told the crowd. (He didn’t run.)

Donald Trump vs Rosie O’Donnell: The long, bitter feud between Trump and actress Rosie O’Donnell goes back to 2006, when O’Donnell criticized Trump on The View for not stripping the crown from a controversial Miss USA winner. The feud became fodder for WWE’s “Monday Night Raw”—in which wrestlers depicting the two media personalities mix it up in the ring. Guess who wins?

The rainmaker: During his first actual appearance on “Monday Night Raw,” in January 2007, Trump appeared on the jumbotron confronting a self-aggrandizing Vince McMahon. “You claim that you tell your audience what they want, what they like, and all of that nonsense,” Trump told McMahon, at which point money rained down from the ceiling into the crowd—some of it actually real. “Now that’s the way you show appreciation. Learn from it,” Trump said. (The money was really McMahon’s.) Thus began the on-screen fictional feud between McMahon and Trump.

“The Battle of the Billionaires” or “Hair vs. Hair:” At the time the highest-grossing pay-per-view event in WWE history, WrestleMania XXIII featured a high-profile bet between Trump and McMahon. Whoever lost would get their mane cut off. McMahon and Trump paced outside the ring, as wrestlers Umaga and Bobby Lashley, representing the two men, sparred in front of 80,000 people in Detroit’s Ford Field. (Trump, meanwhile, slammed McMahon to the ground and punched the WWE chairman.) Lashley eventually won the match, and Trump clapped in McMahon’s face, grabbed clippers, and along with Lashley shaved McMahon’s head.

As Huffington Post noted in February, it was also the moment for what announcer Jim Ross called “one of the uglier Stone Cold stunners in history.” After the match, Stone Cold Steve Austin, who had retired from wrestling in 2003 and guest-refereed the battle, kicked Trump in the stomach and headlock slammed him onto the ground. (Trump, who hadn’t rehearsed the move, didn’t fully make it through the slam.)

Trump buys “Monday Night Raw”—or not: During an episode of “Monday Night Raw” in the summer of 2009, Trump purchased the show from McMahon, promising to make it live and commercial-free. It was just a stunt, but after WWE and USA Networks, which broadcast MNR, sent out a press release lauding the deal, the WWE’s real-life stock dropped 7 percent. In a later episode, McMahon buys his show back from Trump for twice the price.

Trump’s WWE Hall of Fame induction: Trump stepped up to a podium at Madison Square Garden in 2013 and accepted his place in the pro wrestling pantheon, alongside legends such as Mick Foley and Booker T. Facing boos from the crowd, Trump bragged about the ratings at Wrestlemania XXIII, where the “Battle of the Billionaires” took place. “I will challenge Vince next year to a fight, and I will kick his ass,” he said. McMahon, in turn, introduced Trump as a “Wrestlemania institution,” and told the crowd he thought Trump would make a great president one day. The response: more boos.