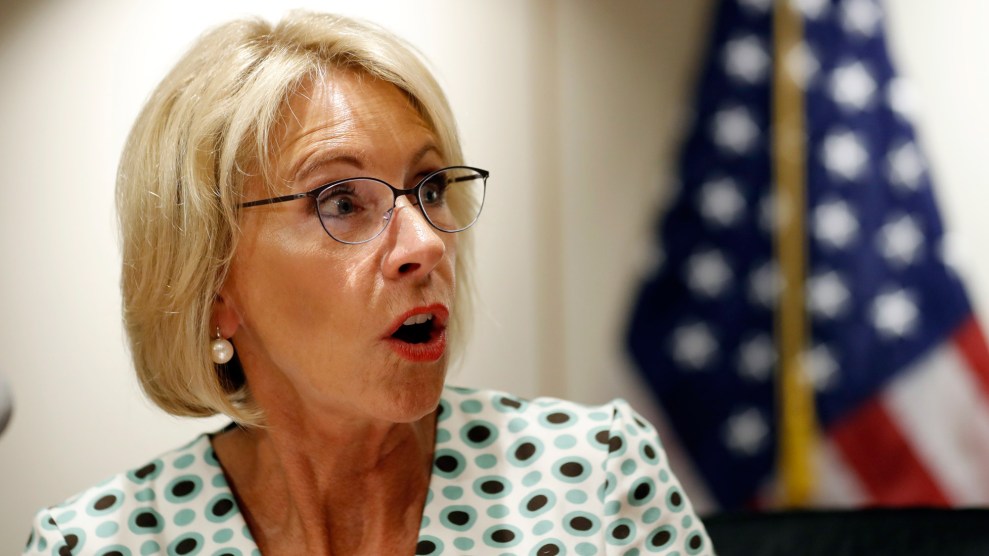 Candice Jackson, the official in question, told the New York Times last week that “90 percent” of campus assault accusations “fall into the category of ‘we were both drunk,’ ‘we broke up, and six months later I found myself under a Title IX investigation because she just decided that our last sleeping together was not quite right.'” Jackson, who once complained that she faced discrimination because she was white, later apologized for her remarks at a listening session with sexual assault survivors—which included students accused of sexual assault, a men’s rights group, and university officials.

Candice Johnson “crossed a serious line,” writes Sen. Murray, and “it is not my only concern.”

In a statement, Sen. Murray said Jackson’s remarks, despite the apology, “crossed a serious line and highlighted her clear biases in this area in a way that, to me and many women and men across the country, should disqualify her from service.”

“This is the last straw,” Murray wrote, “it is not my only concern.”

The call for Jackson’s ouster comes amid correspondence between Democratic senators and DeVos expressing alarm over her department’s civil rights enforcement policies. The dispute began in February, when the department rescinded Obama-era guidelines clarifying protections for transgender students who wanted to use school bathrooms matching their gender identity.

In June, Murray and 33 other Democratic senators wrote to DeVos expressing disappointment in the department’s actions and requesting information on its enforcement activities. Jackson had sent a memo to her field directors that effectively scaled back complaint investigations: Field offices would no longer have to notify the DC mothership of all complaints received. Nor would the satellite offices be asked to look into whether individual an complaint fit into any larger pattern.

In a second memo, Jackson outlined how civil rights officials should handle complaints involving transgender students. She encouraged investigators to assert “subject matter justification” in deciding which allegations to investigate. In other words, in evaluating each case separately, the department’s officers could choose to investigate an allegation involving gender-based harassment but dismiss one related to the denial of bathroom access based on gender identity.

The senators also urged DeVos to increase funding for her civil rights division—the department had proposed the opposite: $1.7 million in cuts. In June, the US Commission on Civil Rights announced a two-year investigation of federal civil rights enforcement under Donald Trump, calling out the Department of Education specifically. “These proposed cuts are particularly troubling in light of Education Secretary Betsy DeVos’ repeated refusal in Congressional testimony and other public statements to commit that the Department would enforce federal civil rights laws,” the panel wrote.

In a July 11 response, DeVos wrote that the civil rights department under President Obama “had descended into a pattern of overreaching, of setting out to punish and embarrass institutions rather than work with them to correct civil rights violations and of ignoring public input prior to issuing new rules.” On her watch, DeVos added, the department would not issue “new regulations via administrative fiat.” Rather, it would revert to its role as “a neutral, impartial, investigative agency.”