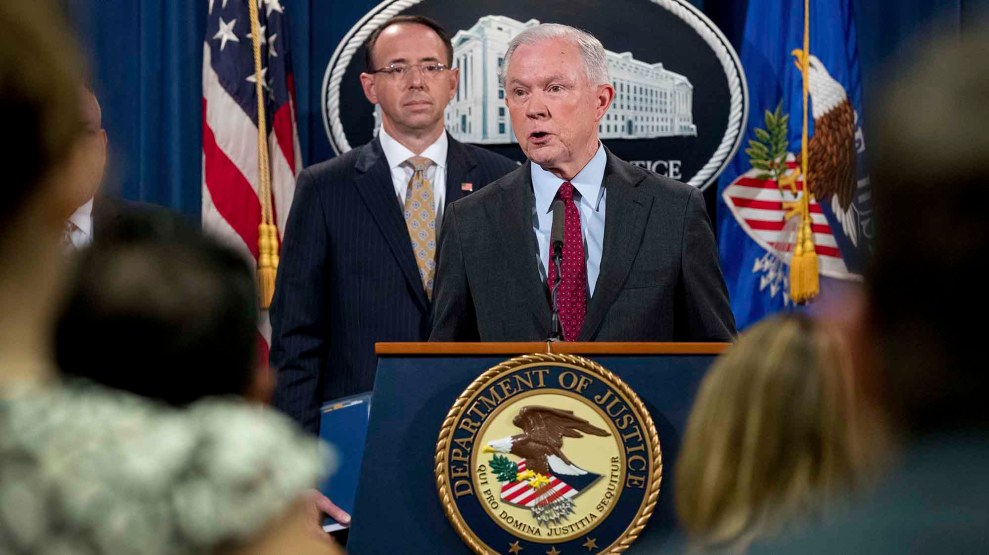 Attorney General Jeff Sessions and other top Justice Department officials hosted a press conference Thursday to announce an international operation that took down two of the world’s largest dark-web internet marketplaces. But when the officials took questions, reporters turned to the political elephant in the room: whether Sessions will keep his job after President Donald Trump slammed him in a New York Times interview.

“This is not really a normal day,” one of the reporters told Sessions, as she began her question. “The president made very disparaging remarks about you, attorney general of the United States, [and the] deputy attorney general yesterday. Given what he said, what is your reaction to those remarks [and] how seriously are you considering possibly resigning?”

“We in this department will continue every single day to work hard to serve the national interest,” Sessions said, noting that Trump sets the priorities and Sessions works to carry them out. He added, “We love this job. We love this department. I plan to continue to do so as long as that is appropriate.” He then tried to focus attention on the marketplace takedown.

Sessions and his colleagues set out to announce that on July 5, the Justice Department, the FBI, and the Drug Enforcement Agency, working with counterparts in a half-dozen countries around the world, busted AlphaBay, a large online marketplace, accessible only through an anonymizing web browser, which sold everything from drugs to stolen credit card data to illicit computer software. Law enforcement officials estimate that AlphaBay facilitated at least $1 billion in transactions since its creation in 2014. After it was shut down, many of the site’s users tried to go over to Hansa, another dark-web marketplace. Authorities closed that site shortly before the press conference, according to a statement issued by Europol.

The reporters at Thursday’s announcement, though, didn’t ask about these operations. Instead, the focus was on the bombshell New York Times interview with the president on Wednesday, in which he said he would have never appointed Sessions as attorney general had he known Sessions would then recuse himself from investigations into Russian meddling in the 2016 election. Trump also slammed Deputy Attorney General Rod Rosenstein for appointing former FBI Director Robert Mueller as special counsel to investigate any Russian intervention and possible connections with Trump associates. “How do you take a job and then recuse yourself?” Trump complained about Sessions. “If he would have recused himself before the job, I would have said, ‘Thanks, Jeff, but I’m not going to take you.’ It’s extremely unfair—and that’s a mild word—to the president.”

A reporter asked Sessions on Thursday how he can serve effectively if he doesn’t have the confidence of the president. “We are serving right now,” Sessions replied.

A final question was shouted to Sessions, as the officials began to leave the room: “Are you concerned that you will be seen as a zombie attorney general?”

Sessions did not respond.