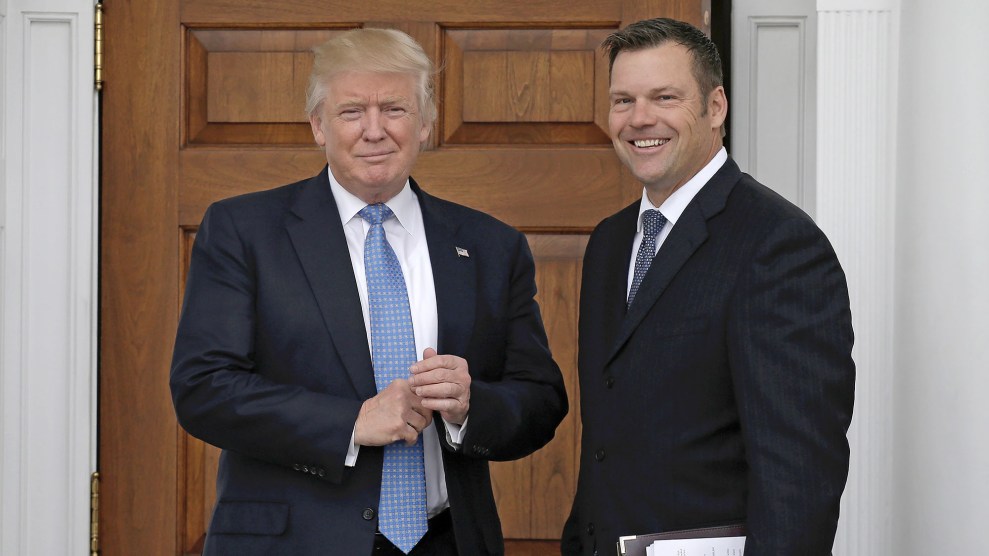 President Donald Trump announced on Monday night that J. Christian Adams, a conservative attorney who has spearheaded efforts around the country to purge voters from the rolls, would be joining the president’s commission to investigate voter fraud.

The commission, led by Vice President Mike Pence and Kansas Secretary of State Kris Kobach, is the subject of lawsuits by the ACLU and another civil rights group for lack of transparency and for failing to have a balance of viewpoints, as required by law. Adams is expected to push the commission even further in the direction of tightening voting restrictions.

After leaving a post in the Voting Section of the Department of Justice, Adams began a quest to purge voter rolls around the country. As detailed by Mother Jones, Adams has sent threatening letters and filed several lawsuits against counties that he claims have too many names on the voter rolls. The actions largely target rural counties with large minority populations, although last year he and his former colleagues began targeting areas with large Democratic populations in swing states as well.

Mother Jones detailed Adams’ work at the Justice Department and the American Civil Rights Union, which sent the letters to rural counties in the South:

The ACRU’s legal work was led by J. Christian Adams, a former staff attorney in the Voting Section of the Justice Department’s Civil Rights Division. Adams joined the department in 2005, when high-ranking official Bradley Schlozman was found by the department’s inspector general to be illegally using political ideology to fill the Civil Rights Division with conservative lawyers. Adams, a conservative attorney from South Carolina, was “exhibit A” of Schlozman’s hiring practices, a former department official who participated in Adams’ job interview later said.

In 2008, Coates and Popper assigned Adams to prosecute a case against the New Black Panther Party and two of its members who were spotted outside a polling location in Philadelphia on Election Day, one of them carrying a nightstick. When the Obama administration took over, the department’s new leadership threw out most of the charges Adams recommended. The case became a cause célèbre of the right. Adams resigned in protest of the Obama administration’s handling of the case, and Coates faced criticism from higher-ups over his work on it. According to a subsequent report by the department’s inspector general, when Eric Holder became attorney general in 2009, he was told that Coates wanted to pursue more “reverse-discrimination” cases and that Coates did not believe “in the traditional way in which things had been done in the Civil Rights Division.”

As a private citizen, Adams worked with Judicial Watch to file lawsuits aimed at trimming voter rolls, before joining the ACRU in 2013. In 2015, he became president of the Public Interest Legal Foundation, another conservative nonprofit law firm whose work has overlapped with the ACRU’s, and he sent letters similar to the Noxubee County one to 141 counties in 21 states. In 2011, he published Injustice: Exposing the Racial Agenda of the Obama Justice Department, an exposé of allegedracism against white people in the Civil Rights Division. He became a frequent commentator on Fox News and a blogger at the right-wing PJ Media, where he recently railed against the “Deep State leftists” of the “DOJ Swamp.”

After joining the ACRU in 2013, Adams started his voter purge lawsuits by targeting rural counties in Mississippi. These were small counties with significant minority populations that were more likely to settle than shell out precious tax revenue for a court fight against former Justice Department attorneys. (Adams says that in counties with small populations, “voter roll bloat can severely skew voter participation rates” and “can serve as a catalyst for fraud.”) Some of them signed consent decrees in a matter of months. By the end of 2015, the ACRU had extracted decrees from three counties in Mississippi and two in Texas. Some decrees allowed counties to continue operating essentially as they had, but the ACRU used them to signal legitimacy to the courts and to pressure additional counties into signing decrees that were often more stringent.

Adams has warned on his blog that “aliens” are voting by the thousands and that the “Left opposes efforts to find and remove aliens on the rolls, because the aliens are voting the way they want.” The Public Interest Legal Foundation, where he is president and general counsel, recently published a two-part investigation called “Alien Invasion,” claiming that more than 5,500 noncitizens had registered to vote inVirginia and cast thousands of fraudulent ballots. The data appears flawed. “Not just incredibly inflated; designed—and specifically designed—to get inaccurate information,” says Justin Levitt, an election law expert at the Loyola Law School and a former deputy assistant attorney general in the Obama administration who reviewed the reports and underlying data. Still, Adams has taken to Fox News and other conservative outlets to publicize his reports.

“I can’t tell you what Mr. Christian Adams thinks, but I can tell you that he is going around to places with a history of racial discrimination and seeking to have legitimate voters stricken from the list,” says Lloyd Leonard, director of advocacy at the League of Women Voters, which opposed Adams in several voting rights cases. “Draw your own conclusions.”

Adams denies that his cases are motivated by race or politics. “We go where the problems are,” he says in an email. “Hardly any of the counties that received notice letters from us were minority. And of those that were sued, the facts show the alarmists are wrong. But surely we can both agree that ‘minority’ or any other cohort of voters deserve clean voter rolls, just as they would require clean water or other necessary public services.” Popper calls question of race in list maintenance a “red herring,” adding, “In order to have election integrity, you’re going to have to check things, and in order to check things, there’s always going to be a differential impact. That’s not the same as discrimination.”